This is an article from the September-October 2015 issue: Setting the Scriptures Free in a Digital Age

But Aren't They All

In a remote corner of South Asia, among ancient rocks and militant thorns, Christ’s church has taken root among the Ng people. It can only be described as early growth. Tender shoots are springing up in shallow soil as rain falls in the distant mountains and the water seeps into valleys that have been parched for generations. Leaves and flowers strain toward the Sonlight, eager to grow.

The Joshua Project counts 0.0% Christians among the Ng. This either confirms their insignificance, or their significance, depending on your perspective. External estimates of their population are less than 3,000. Language surveys diagnosed their language as near-death forty years ago. They are isolated geographically, politically, religiously, economically, linguistically, and missionally.

But once a week Ng believers hike for hours to gather in three small congregations to worship, to confess and repent, to embrace one another, to sing praises, and to hear God’s Word – in a foreign language.

For years these congregations have only heard God’s voice in a foreign language. With no scripture recorded in their own language, their only option has been spontaneous personal or pastoral translation as they read and listen. The cumulative result of this experience has been twofold.

First, their thirst for God’s Word has increased to passion. For many, God’s Word is their highest priority. They ponder, pray, plan, and persevere toward having God’s Word in their own language. This is their dream, their goal, their calling.

Second, they are unwilling to see their families and friends pass into eternity without hearing God’s Word in their own language. By their own count 30,000 people speak their language. They are not praying for a missionary or waiting for someone else to care and come. They are not asking permission. They are the body of Christ, the bride of Christ, His church. They are responding to the Holy Spirit and moving forward in faith.

For several years our English Language Learning (ELL) team had been working with our international partners in this country to increase their English competency. Because most of the global training resources and references for Bible translation are in English, competency in English translates directly into access to these resources. As the global Bible translation team has expanded internationally in recent decades this English training has become extremely valuable. 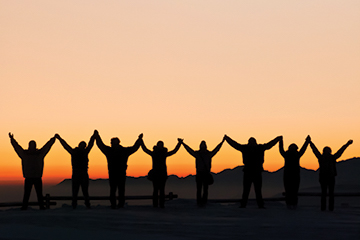 Talking, eating, praying, laughing, crying, and learning English together created a deep relational bond between our ELL team and these local partners. While reflecting on the impact of both the training and the relationship, one of the young local leaders in Bible translation opened his heart and shared the burden that had been weighing on him for years. His burden was the agonizing pace of progress in Bible translation for the languages of his nation. His heart was broken for the lost and dying, for his friends and neighbors, and for the millions vainly pursuing ungodly darkness – for lack of light.

At the convergence of encouragement from our ELL team and his own deep discouragement for the lack of God’s Word in local languages, he ventured an unanticipated question. “Could you use the principles of English Language Learning to teach us how to accelerate Bible translation for our people?”

The only immediately obvious answer to his question was, “I don’t know.” But love and relationship demanded the follow-up response, “I’ll try.”

In the ensuing months Wycliffe Associates’ ELL Director, Dan Kramer, researched the existing resources for Bible translation and began building a new training approach for translators on the same educational foundation that supports English Language Learning. Since he has described the theoretical and practical underpinnings of this new approach in a paper titled MAST – Mobilized Assistance Supporting Translation: Brain-Based Bible Translation Methodology, I will not attempt to recount the details here.

One fundamental tenet of MAST is that it builds on God-given language ability. Language is not a unique specialty. It is pervasive. It is part of God’s image in mankind. Even its astonishing diversity is a result and reflection of God’s redeeming grace. From a practical perspective, language competency is the readily available natural resource for any community beginning Bible translation.

On the first day of the MAST workshop only four of the teams were present. The fifth team, from the Ng people, did not arrive. So, the MAST training proceeded without the Ng.

At the end of the two weeks of training the four teams were ready to begin translating 1 Thessalonians. It was at this point that the Ng team finally arrived. They had entirely missed the MAST training. As the other teams began translating, the immediate question was, “What should the Ng team do?”

Dan considered the options, then encouraged the Ng team to just begin translating 1 Thessalonians along with the other teams. They could just learn “on the job.”

At first the teams that had prior Bible translation experience struggled with the MAST method.

The MAST method starts with a group overview of the book, chapters, and passages. After the group discussion the chapters, passages, and verses are delegated to individuals to work on separately. So, instead of working sequentially through the translation as a group, the individuals initially work in parallel. This naturally accelerates the process based on the number of translators involved. 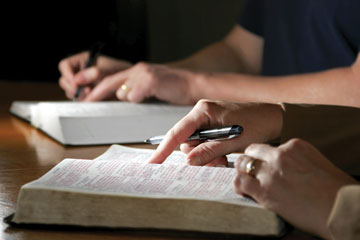 Each translator then reads, or listens, to a small portion of scripture from source translations. The portion must be brief enough for the individual to hold it in short-term memory, but long enough to be a coherent thought. Once the translator has the scripture portion clearly in mind they close the sources and think through the passage in their own language. As they think about the passage they make an initial “blind draft” in their own language. This gets the draft started with a very natural expression of the passage in the target language.

Blind drafting was not part of their prior training, so it took some time for the experienced teams to learn this new approach.

Once the initial draft is written the translator returns to the source texts to check whether anything has inadvertently been added, subtracted, or distorted. The initial draft is then revised to increase the accuracy and clarity. After each translator completes their delegated passages they then exchange their drafts and peer check each other’s work. After this check the group begins harmonizing the individual translations to assure they are using the same words for key terms and are consistent in their descriptions of the people and events in the book. Already, immediately following the initial drafts, there are three stages of quality checking under way: individual, peer, and group checking.

As the experienced translation teams moved forward, the Ng team also stepped out in faith. Dan and others coached and mentored them along the way, but the Ng translators quickly learned the MAST method and put it into practice.

As you would expect, the local believers were exhilarated by the translation progress MAST enabled.

Based on the encouragement from the June 2014 MAST workshop, the Ng believers began planning for a second translation workshop late in 2014. Their goal was to recruit 26 translators. This would be almost 10% of all Ng believers! For a variety of reasons they ultimately had 13 translators at the second workshop, just half of their goal.

But in just two weeks these 13 translators drafted and checked Matthew, Mark, Luke, John, and 1 Timothy – 48% of the New Testament!

Dr. Bruce Smith is President and CEO of Wycliffe Associates. You can learn more at wycliffeassociates.org.