Our Role in Hastening “No Place Left”

Used by permission of 2414 Ventures.

A few years ago Mission Frontiers featured David Platt’s Radical, a strategic book for mobilizing the church. We are delighted now to feature Steve Smith’s thriller “No Place Left” saga, designed to carry the Church further in the same direction. This excerpt is from Hastening (Book One). 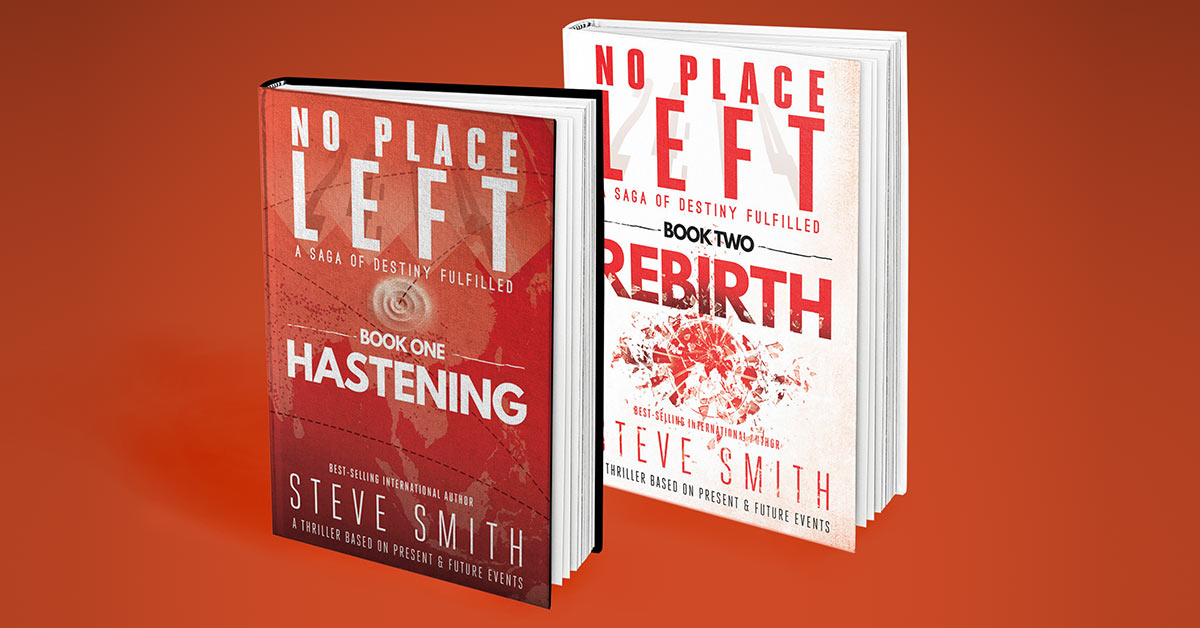 “Congratulations, my imperturbable accomplice,” John said. “We made the Washington Post.”

Christopher sighed as he scanned the headline: L.A. Pastor Speeds Up the Return of Jesus. “Really, bro, you shouldn’t pay attention to these things.”

“They’re saying we think we can dictate when Jesus returns. They’re saying we’re taking Matthew 24:14 and 2 Peter 3:12 too far, as if the moment the last unreached people group is reached, Jesus has to return,” John said.

Christopher studied his longtime friend. “There’s more to it, though, isn’t there, bro?”

“Well,” John admitted, “I’ve had similar questions, lingering questions. We’re gaining a lot of momentum, so I haven’t wanted to rock the boat—especially since I often appear critical.”

“Bro, I wish you had said something sooner,” Christopher commented. “Actually, I wish that I had said something. We’re getting a lot of kickback on this, so I’ve been studying it more deeply—making sure we’re not off base. And here’s the thing. Of course God is sovereign. And at the same time, we play a role in bringing about His sovereign plans. Think about it this way. Remember when you came to faith?”

“I was quite the rabid dog, wasn’t I?” John said, smiling. “Couldn’t shut up about my new life.”

“Well, not exactly. You were also really, really nervous about talking to your dad about it, remember?”

“Well, who wouldn’t be?” John said. “He was a Rhodes scholar. Tenured faculty. Twice the intellectual—and cynic—I am. And always finding fault with born-again Christians.”

Christopher nodded. “You kept praying, ‘Lord, send someone to witness to my dad, someone with the intellectual faculties to back him into a corner.’ Remember?”

John winced. “Yes, until that fateful day when I realized my dad was my responsibility. It was up to me to share the gospel with him.”

Christopher leaned back in his chair. “Now, think about it, bro. How long did you wait to open your mouth? Six months?”

“Yeah, but I finally got convicted to do something about it. Otherwise I probably would have waited six years, or perhaps even sixteen.”

John paused. “One of the hardest things I’ve ever done was buying that plane ticket to Boston. But you know, after we had spent a little time together and I shared my story, he just melted. I was speechless.”

“Bro, the testimony of your changed life and your love for him was more powerful than any apologetics someone else might have debated with him,” Christopher said, smiling.

“I—I guess so. I’m still amazed my dad’s a Jesus-follower. The cynic now an evangelist!”

Christopher leaned forward. “Now think about this, bro. You were the instrument God used to lead your dad to faith. You wanted to wait years and very well might have if God hadn’t convicted you to speed up the process.

“You and I know the date of your dad’s salvation was set in heaven before the earth was formed. But, in a way, you hastened that day by buying that plane ticket and witnessing to your dad. Perhaps if you had waited six years, he would have believed later, but you didn’t wait. You hastened the day, though from heaven’s viewpoint that had been God’s plan all along. Your motivation fit within God’s plans.”

“God destined my father’s day of salvation, but I became His instrument,” John repeated to himself. “From my vantage point, I speeded up that day by acting in faith sooner rather than later. Someone was going to win him. Why not me, and why not then? How was I to know it wasn’t to be his day of salvation?”

“It was the same when Church in the City sent our first short-term team to China,” Christopher said. “Remember the medical clinics we did in the villages? There were people there who might not have heard the gospel for many more years if we had not come. God knew when He created them when they would believe, but from our perspective, we hastened the day of their salvation.

“Look, bro. Fatalism drove those who opposed William Carey. They told him, ‘Sit down, young man. … When God pleases to convert the heathen, He’ll do it without your help or ours.’”

John chuckled. “Uh, yeah, I could have been one of them.”

Christopher continued, “All I know is that someday God will raise up a generation with the motivation, the wherewithal, and the perseverance to finish the task—the last generation. From earth’s vantage point—whether or not we become that generation—we are hastening that day by focusing on finishing the task. From God’s vantage point, He has chosen someone to finish the task and appointed the times and seasons of their final work. If we are the ones He has chosen, we’re not speeding God up; God is speeding us up to usher in the day He prepared long ago.

“Bro, we’re on solid biblical ground. Solid not just according to me but also respected theologians. Listen to Marvin Vincent’s hundred-year-old comments on 2 Peter 3:12.”

Christopher picked up an ancient tome, gently leafed to the appropriate page, and read:

I am inclined to adopt, with Alford, Huther, Salmond, and Trench, the transitive meaning, hastening on; i.e., “causing the day of the Lord to come more quickly by helping to fulfil those conditions without which it cannot come; that day being no day inexorably fixed, but one the arrival of which it is free to the church to hasten on by faith and by prayer.”

“Will Jesus come back the moment the last UPG is reached?” Christopher asked. He glanced once more at the headline as he grabbed the paper again. “I don’t know. I just know that this is the mission He left us with, and that He said we would finish before His return. I want to finish the task He has given us.

He tossed it back down again and said, “He’s not waiting for permission from us to come back. Rather He is patiently waiting for us to do what He commanded, and He’ll come back when the time is right. …

“There will be a last generation. Why not us? Carey suggested his generation speed up the Great Commission by going. I ask why we can’t hasten finishing this task. By God’s grace I will lay down my life to see it completed. Perhaps God’s plan all along has been to raise up this generation as His vehicle for finishing the task before He sends Jesus on the day appointed from the foundation of this world.”

Glad to see this book by Steve Smith getting out there. Was it originally released under another title?

So happy to find this! God bless you Steve Smith! My book just published is getting the same flack - how can we mere mortals speed up the pre-ordained day of the Lord’s return?  The thesis of ‘Jurisdictions- Take Charge of the Sphere You Influence’ is: God has given each of us a sphere of influence over which to establish His dominion - jurisdiction being the area over which we have the legal right to speak. If we all fulfilled our mandates in the jurisdictions allocated us how much more of the earth would be under His dominion and how much closer would be His return! Thankyou for your encouragement.The ‘host of witnesses’, still waiting, are not complete without us at this end of the age.