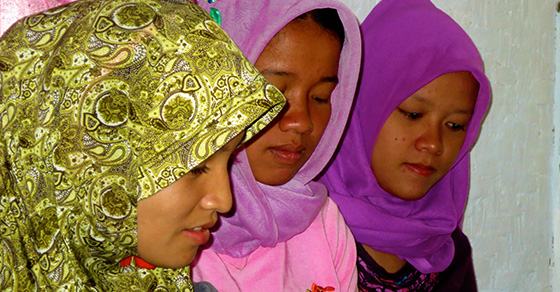 I have been investing in this woman for about six years now. She had asked me to help her start a “jamoat” (group meeting) for women who would never go to a traditional church. I gladly helped, teaching her a simple discovery method of Bible time with these women, in which different women took turns facilitating the time. She was receptive but headstrong in many ways—especially when it came to doing things differently than she had been taught in the traditional church. Several times I considered giving up, but her potential caused me to persevere. I had reduced my proactive investments in her life, but was responding to her requests for fellowship and help. One of her initiatives was to faithfully attend, with her husband, a weekly prayer meeting for the lost that we hosted for her language-group. So when we decided to train this small prayer group in DMM, she and her husband were part of our group.

During each lesson we could see her wheels turning. She took careful notes. When we got to the oikos (household) lesson she began thinking about the bazaar. Spiritual discussions are normal for her, with anyone within range. The new norm of looking for Persons of Peace, as laid out in Matthew 10 and Luke 10 intrigued her.

What Needs To Be Done?

At the end of the first level of training we encouraged everyone to practice sowing seeds of the kingdom (shema lifestyle) to look for people who might be People of Peace, to practice doing Discovery Bible Studies in whatever situations they could, and to tell others about this training. I suggested she start doing a Creation to Christ study with her older sister, who seemed to be opening up to her kingdom- sowing efforts. She looked at me like that was a brand new idea; but within a day or two she asked her sister if she would like to read and learn about the prophets.  Zarina’s sister answered, “Of course!” Not only her sister, but also her husband and their daughter-in-law also often sit in on the study. They comment that they have never had the opportunity to learn all this before. Zarina is amazed at the openness of her sister’s household and wonders why she didn’t do this ten years ago!

In the bazaar Zarina is busier than ever. In our training she saw Jesus’s method of sharing the kingdom in diverse ways with those who are open — little by little, not necessarily dumping out the whole message at once. She began using various tools, sections from the Scripture that we suggested in the training, and seeing openness and interest. She has been using every opportunity to express God’s kingdom to people around her. Zarina now understands that the point of the Great Commission is not to make converts but to make reproducing disciples who love and obey Jesus, as the norm.

When I met with her for coaching a couple of weeks ago, she said she didn’t know how to keep up with all the people and opportunities. This is a good problem; it causes her to have to grow in multiplication principles. We’re helping her notice the groups and focus in on them rather than the individuals. We’re also helping her think about how to keep her group times so simple that the group members are the ones who take it to their other relatives, not her.

She has changed. She now notices people who are not only looking for spiritual truth but also willing to open up their households to the same. Her new pattern is to facilitate a Discovery Bible Study, to get people into the Word instead of just leaving them with bold declarations that possibly meant little. As a result of on-going coaching, she now works more strategically – using methods that multiply instead of thinking she needs to do it all herself. Recently a woman invited Zarina to her home. The woman’s household were present: her husband, daughter, and daughter-in-law. Zarina facilitated a Discovery Study from the OT. The husband asked if Zarina could find him one of those books (the Bible). He then asked her to join him in taking the same story to his relative’s household. Instead of saying she’d go, she challenged him to go and facilitate the same Discovery study they had just finished.

As Zarina expressed amazement at all of the opportunities, I asked her if it feels very different from a year ago. She responded, “Of course!” And why? She said it was due to the prayer group, the DMM training we facilitated this year, and the “team-ness” she experiences as we focus together on the task. This indigenous woman is now reproducing laborers for the harvest.

Vivian Rawlins (pseudonym) and her husband have served in Central Asia since 1990s. Having learned two of the languages of the area they are seeking to catalyze and support concerted efforts that result in movements of disciple-making communities among these two language groups and beyond.