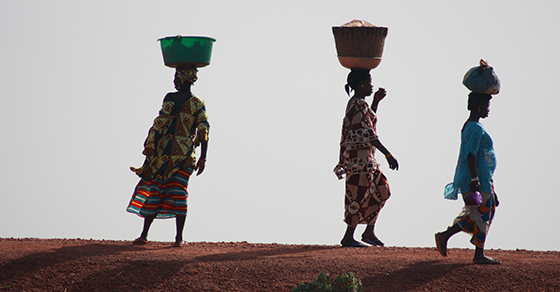 Sub-Saharan Africa has over 60 Disciple Making Movements—to the fourth generation. Several of them are in East Africa, where over 100 denominations, churches and organizations carry a common vision to plant Movements among UPGs. With over 5,000 new churches, fruitfulness has come not only through organizational partnership but also through partnership between male and female. The leaders of East Africa’s network invest in women by equipping them as disciple-makers and trainers of other women. In the past three years, God has used female disciple-makers to plant over 250 reproducing churches in this region.

According to one woman who is an African DMM Trainer and leader, the following is just one of numerous scenes which occurs as they intentionally equip women, alongside men, for the launch of cascading movements:

In East Africa, one female worker enters an open air market where tables and baskets are laden with colorful fruit and vegetables. Venders vie for customers, selling household goods, clothing and food. Children with big eyes and shy smiles tug at their mothers’ legs while the haggling over price takes place overhead.

In a context like this, Yannet strolled through the market, praying for God’s work among this UPG. She prayed for a Person of Peace and was alert to the faces, waiting for the nudge of the Holy Spirit. She searched the crowd for anyone the Lord would have her speak to this day, and noticed one woman who continued to stand out. Yannet asked herself, “Really, Lord, is that what you want me to do?” Yannet then went obediently to the woman, hugged her, and said, “I love you, because of Jesus.” The woman responded, “If you love me, come to my home for coffee.”

On the appointed day, Yannet and a co-worker returned to the city and arrived at the new friend’s home, to find a group of 15 people gathered! Yannet quickly asked the Holy Spirit what to say to them, and he said to tell them about HIV/AIDS. While Yannet spoke, her praying co-worker observed that a deaf girl was demon possessed. The two workers prayed, cast out the demon, and the girl’s hearing was restored. Seeing this miracle, all present accepted Jesus Christ, and a church was planted – followed by 14 more churches in the area.

These East African women are about the Father’s business. One is a 60 year old grandmother, retired from her career, now traveling weeks at a time to unreached peoples. Most of the women are homemakers and not funded from any outside source. Some sell jewelry or dishes, if necessary, for their bus fare to a UPG. When one woman leader was asked how her group raised funds to accomplish such amazing results, she said, “We don’t. They just go.”  THEY….JUST…..GO! Men are releasing women. Women are being obedient. God is producing the fruit. Thank you to our African brothers and sisters for showing us what this kind of partnership looks like in the Kingdom!

Barbara B. is with Act Beyond. http://www.beyond.org  She lived in Africa for several years assisting MANI (Movement for African National Initiatives) with UPG assessment. Barbara now serves with the Ephesus Global Team for the purpose of seeing cascading movements to Christ among UPGs.