The Power of Partnership

The Perspectives Global network has grown steadily over the last twelve years. Today there are well-established autonomous national study programs on every continent, in eleven countries. There are ten more countries in various stages of development. Dozens of other countries are eager to start. Translations of Perspectives on the World Christian Movement exist in Korean, Portuguese, Chinese and Spanish. Arabic, Indonesian, and French translations are in process. Our last global gathering brought together over 130 partners, collaborators and interested parties from 24 different countries. But it was not always so.

In the fall of 2001, a survey had been done by a summer intern on the global impact of Perspectives. The concepts had spread far and wide, touching roughly 30 countries through those whose lives had been changed by the course. Alumni brought the teaching with them as they went to other nations, occasionally utilizing the standard curriculum but more often one of the many derivative courses. Of those initiatives, New Zealand, Australia, and India and the UK offered Perspectives in English, more than a dozen countries offered a major derivative in Spanish and as of 2000, Perspectives Korea was just getting started.

The survey had made it clear that the demand for the course went far beyond North America and that we had been remiss in our stewardship of the course. Perspectives was our most effective “mobilization through education” tool and yet when inquiries came from abroad there was not one person in the organization responsible for answering them or supporting the initiative of others. A handful of us decided that needed to change. It had been 27 years since Dr. Ralph Winter had convinced David Howard to allow him to organize the first class as a follow-up for the card signers at Urbana 1973. We had recently completed the major revision of the Perspectives on the World Christian Movement curriculum in 1999 (the 3rd Edition). We knew we had an opportunity and a responsibility to speak into the mobilization movement we had helped to create. We met regularly to agree on how we would respond to the growing desire of leaders in many countries to start their own study programs even though it was not a part of anyone’s official assignment until 2009.

In many ways the greatest asset of Perspectives Global has been our lack of personnel and financial resources.  It has forced us to work through others and invite others to join us simply because they share the same passion for what they know God can do through the course. We have never had the capacity to be an international organization with a hierarchy governed by policies, procedures and purse strings. We were forced to organize ourselves as a distributed multi-organizational team committed to serving a growing peer-to-peer network of partner programs. We choose to lead through servant leadership, teaching and articulating guiding principles. Whatever we have to offer in the way of standardized resources we have only offered as a starting point knowing that if national leaders are entrusted with ownership they will make better choices than we could ever hope to as outsiders.

An obvious part of the legacy of Ralph Winter was his belief in influencing others through publication and education. What may not be as obvious to the outsider is how much he also valued collaboration. Although he was not involved personally in developing Perspectives Global, our whole approach was a natural progression from what we had learned from him. The genius of his method was to attempt great things by seeking first and foremost to influence and work through others rather than attempting to do things directly. It is not surprising that virtually everything we are accomplishing in Perspectives Global is done through partnership and collaboration. Three quarters of those we rely on to serve new movements are not members of our organization. We only have one member serving in another country.  We recently counted 27 formal and informal partnerships.

With the completion of the Spanish and Chinese translations this past year, the emerging demand from over twenty countries is far beyond our current capacity to respond. Things will only get more challenging 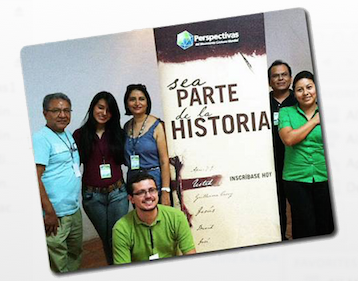 when the French translation is completed, another global language of education that will open up even more countries, especially in Africa.

The last few years we have been coming to a greater realization that we cannot continue to add new programs one country at a time. We need to be thinking and planning at all times for multiplication. This means standardizing training, resources and events. It also means working even more through partnerships and empowering others to do the work of supporting emerging programs.

We have run events at a rapid pace this past year with teaching and training events in Mexico, Costa Rica, Hong Kong, Indonesia, Cuba and Kenya. What is most thrilling to me is that I only participated in two of those events and was able to entrust the leadership of the rest to others. I am also thrilled that our Costa Rican and Mexican directors are already forging plans to help launch programs in neighboring Central American countries. The Nigerians are asking us to train them to help launch programs in neighboring countries like Ghana. We now have a regional director over Asia who has irons in the fire in Mongolia, Myanmar, Viet Nam and Thailand. Our Spanish support team will meet with key leaders in Costa Rica in January primarily to address the question of how to most effectively equip and empower new leadership from Latin America to meet the growing demand there.

In his classic article, “Four Men, Three Eras, and Two Transitions,” written in the early 80s Dr Winter predicted that the final push to establish a following for Christ within the remaining unreached groups would be largely the work of the Church in Non-Western world. Today we are seeing that prediction become a reality. It is a joy and a privilege to serve that movement.

The Perspectives Global Service Office exists to see Perspectives used as a catalyst to unite the Church in any country around his purpose for his people within history. If God continues to bless our efforts, as he has in the past, we will very likely see the presence of Perspectives study programs increase from the current 21 countries to over 50 countries in the next ten years.