The Gospel of Purity for Unreached Peoples

[Adapted from The Global Gospel: Achieving Missional Impact in Our Multicultural World by Werner Mischke (MissionONE, 2015). Purity is one of nine honor/shame dynamics explored in this book.]

Does the Buddhist, Hindu or Muslim have to learn to think like a Westerner about guilt before he or she can appreciate the good news that Jesus’ blood offers a better answer to their problem of sin and shame?

The vast majority of unreached and unengaged peoples embrace Buddhism, Hinduism, or Islam. And despite their many significant differences, these religions share at least one thing in common—religious purification rituals.

Buddhism: “Purity (suddha) [aims] to purify the personality… so that all moral and character defilements and defects… such as anger, ignorance and lust are wiped away and Nirvana can be obtained.”1

Hinduism: “Religious acts presuppose some degree of impurity or defilement for the practitioner, which must be overcome… before or during ritual procedures. Purification, usually with water, is thus a typical feature of most religious action.”2

Islam: The Quran says, “For Allah loves those who turn to Him constantly and He loves those who keep themselves pure and clean” (2:222). “Before offering prayers, it is necessary to perform [ritual purification].… If the body or clothes show traces of blood, pus, urine, feces, semen or alcohol, then [purification] becomes essential.… The Quran says: “None shall touch it but those who are clean (56:79).”3

For the Hebrews, everything in life was perceived in relation to God’s holiness. This led to the purity concepts of clean and unclean.

On the basis of Levitical law, everything in life was either holy or common for the Hebrews. Those things determined common were subdivided into categories of clean and unclean. … Clean things might become holy through sanctification or unclean through pollution. Holy things could be profaned and become common or even unclean. Unclean things could be cleansed and then consecrated or sanctified to be made holy.4

MOVING TOWARD HONOR OR SHAME?

Jewish behaviors in the cycle of sanctification were of two types, as shown in Figure 1 below5 —moving toward honor and the holy, or moving toward shame and the unclean. 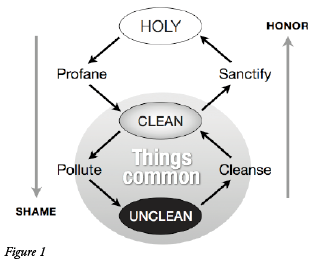 1) Actions moving a person toward holiness, toward God (and honor):

2) Actions moving a person away from holiness, away from God (toward uncleanness/shame):

While he was in one of the cities, there came a man full of leprosy. And when he saw Jesus, he fell on his face and begged him, “Lord, if you will, you can make me clean.” And Jesus stretched out his hand and touched him, saying, “I will; be clean.” And immediately the leprosy left him. And he charged him to tell no one, but “go and show yourself to the priest, and make an offering for your cleansing, as Moses commanded, for a proof to them.”
(Luke 5:12–14, cf Mark 1:40–44)

How can we grasp the depth of uncleanness and shame of the “man full of leprosy”?  Especially noteworthy is this passage from Leviticus:

The leprous person who has the disease shall wear torn clothes and let the hair of his head hang loose, and he shall cover his upper lip and cry out, ‘Unclean, unclean.’ He shall remain unclean as long as he has the disease. He is unclean. He shall live alone. His dwelling shall be outside the camp.
(Lev 13:45–46)

We make note of three things:

Since the Hebrews had their identity rooted in their community, the shame and degree of exclusion for the man full of leprosy was extreme. Of course, there were good reasons for isolating people with contagious disease. God was providing boundaries for their survival.

What may we observe about Jesus and the “man full of leprosy”? First, the man full of leprosy had little hope of ever again becoming clean. He was not able to regain his honor or “place” in the community. His was a life of isolation, embodying shame.

Second, Jesus “stretched out his hand and touched” the man full of leprosy and said, “Be clean.” Two miracles happened. One, the leper was cleansed. Two, apparently Jesus did not himself become unclean! His personal purity was untainted. This was unthinkable to the Jewish mind.

Third, we observe that Jesus was concerned for the man’s reintegration into his own community: “Go and show yourself to the priest, and make an offering for your cleansing, as Moses commanded, for a proof to them.” Jesus wanted the leper to have his honor restored among his own family and friends following the process defined in Leviticus 14. Here are two main points concerning purity codes and honor/shame:

PURITY LANGUAGE IN THE GOSPEL MESSAGE

The apostle John used purity language to describe how Christians can enter into fellowship with one another and with God. It is the blood of Jesus which cleanses God’s people from their sins:

“But if we walk in the light, as he is in the light, we have fellowship with one another, and the blood of Jesus his Son cleanses us from all sin. … If we confess our sins, he is faithful and just to forgive us our sins and to cleanse us from all unrighteousness” (1 John 1:7, 9).

Some of the New Testament’s most extensive material connecting purity with the saving work of Christ and the life of believers is contained in Hebrews. For example:

A GOSPEL OF PURITY FOR MAJORITY WORLD PEOPLES

The cultural dynamics of purity and honor/shame are held in common by the Bible’s cultures and many Majority World peoples, and this represents a significant opportunity for contextualizing the gospel. The man who was full of leprosy pleaded, “Lord, if you will, you can make me clean.” Using similar language, believers can present to people in the Majority World the good news that Jesus Christ came to cleanse them of their sin and shame. When introducing the gospel, believers can ask, for example, “Can I tell you a story about God coming to earth to cover your sin and shame, and to make you clean forever?”


[This material will also be adapted from Beyond Literate Western Contexts: Honor & Shame and Assessment of Orality Preference, Samuel E. Chiang & Grant Lovejoy editors (2015 in cooperation with Capstone Enterprises)]

Imagine yourself in a Hindu, Muslim or Buddhist culture obsessed with dietary limitations, ritual cleansing from defilement, and seeking honor. Now consider a gospel presentation that starts with what you already “know,” rather than asking you to think like a Westerner about personal guilt:

Yet God is light. In Him there is no darkness at all! And just as a candle drives darkness from a room by entering it, He alone has the power to drive out our defilement and give us true enlightenment.

God saw that our own best efforts to cleanse ourselves are like dressing in “filthy rags.” So He provided our only hope. God Himself embraced and destroyed defilement by entering His own 1.creation in the person of Jesus Christ, the only man to ever live undefiled. The Bible describes Jesus as “the true light that enlightens every man.”

Not only did Jesus destroy defilement through his holy life, but He also demonstrated that He is God by driving disease out through his touch and even his spit! No mere prophet could touch a leper without being contaminated, and a prophet’s spit is just as foul as anyone else’s. So Jesus’ miracles—healing blind eyes with spit and the leper with His touch—prove that Jesus alone is God, come to deliver us from our defilement and our diseases.

And not only did Jesus destroy defilement and disease by embracing them, He also embraced the greatest enemy—death itself—and then destroyed it by rising again to prove that He truly is God.

Thus our only hope for true cleansing and enlightenment lies in inviting Jesus Himself to cleanse our defilement, and to send His Spirit to enlighten us, by living in and through us. All your life you have sought cleansing or enlightenment that you cannot attain on your own. Are you ready to abandon that burden and embrace being a new creation in Jesus Christ?

Werner Mischke has been serving with Mission ONE since 1992, and is currently Executive Vice President and Director of Training Ministries. A 2009 ministry trip to Lebanon inspired Werner to research honor-shame dynamics in the Bible. This led to extensive reading, researching, training, and to collaboration in developing resources about honor/shame for the missions community.