Forged Out of Hardship

On August 3, 2014 at 2:30 a.m., Ibrahim awoke to a nightmare. ISIS was attacking Sinjar and slaughtering his Yazidi people. Being responsible for his six siblings after his father’s death, this 22-year-old prepared his family to leave. By 7:30 am, Ibrahim and his family joined the mass exodus walking over 14 kilometers from his village to Mount Sinjar by foot.

There was no time to pack; they simply left with the clothes on their backs. Stranded on the mountain for nine days with no food and minimal water, his family fought to survive. On the 7th day, Ibrahim’s mother severely hurt her leg through a fall on the rugged moun- tain terrain and was unable to walk. Ibrahim couldn’t leave his mother; he was staring death in the face.

As a devoted Yazidi from the priestly cast, Ibrahim only knew of one thing to do: cry out to God for mercy to heal his mother. The next morning, his prayers had been heard and his mother could walk. Over the next two days they walked to a refugee camp in Syria, where they ate, drank and were seen by medical professionals.

After this, Ibrahim’s family moved to the city of Duhok in Northern Iraq, where they lived in a primary school. There he met Salam, another Yazidi who was serving fellow refugees while boldly sharing about the love  of 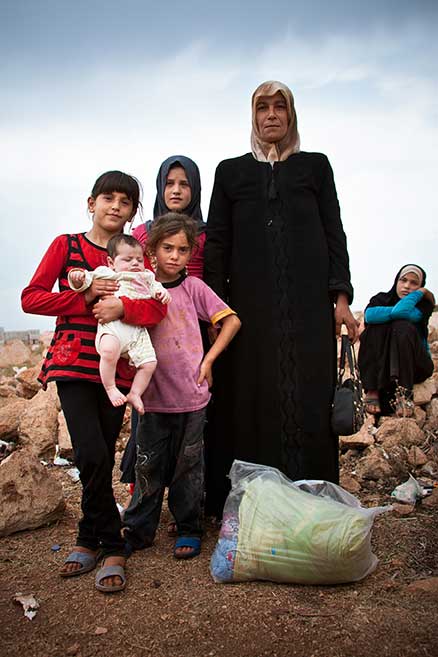 Jesus for the Yazidi people. Truly, Ibrahim felt that God had protected his family and his people on the mountain when they should have died. He had seen God miraculously heal his mother. Was this all so he could encounter Jesus? Ibrahim’s heart was stirred as he heard that Jesus died and rose to take the sin and shame of the whole world.

In late November 2014, Ibrahim’s family was moved from the primary school to a camp for internally displaced Yazidi people. Salam continued to meet with Ibrahim and encouraged him to start a small group to help their community. Following Salam’s suggestion, Ibrahim started to lead a small group. This group currently meets three times a week to study the New Testament and serve the refugee community they live among. Through acts of service while sharing Jesus’ love, Salam has helped to start five other groups like this one among his Yazidi people. Two of those groups just started in the past month. Many who are in these new groups have started following Jesus since the tragic events in August 2014.

From an isolated conservative unreached Yazidi community in Northern Iraq, God is bringing his kingdom even in the midst of horrible hardships (Acts 14:22). When there is chaos, there are often kairos moments for the kingdom of God to spread. If you desire to see the kingdom tangibly advancing, go to the place where people are suffering. It is not the healthy who need a doctor but the sick (Mark 2:17). Right now, there is an incredible need for laborers in the Middle East to join God in bringing in his harvest. There are many like Ibrahim who are waiting to hear a different message, one of love and hope.

Right now in Northern Iraq, Duhok province has the largest number of internally displaced people, approximately 444,4201, and approximately 100,500 Syrian refugees.2 These numbers have overwhelmed the government and the international relief community. When the surge to retake Mosul happens, there will be an estimated 350,000 additional internally displaced people fleeing into the Duhok province. Opportunities abound to serve and love people in Jesus’ name. When the darkness of ISIS seems to be closing in on so many, we see the brightness of Jesus shining even brighter! The wars in Iraq and Syria will end, and when they do, there will be millions of people in desperate need looking for hope—may we respond to this opportunity to build and establish God’s kingdom.

James Bradwell has lived in the Middle East for 8 years and now resides in Northern Iraq with his wife and four children.