Spotlights for January and February 2013 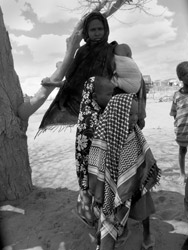 Peoples of the Horn of Africa

With Emphasis on the Cushitic Family

Approximately 150 people groups inhabit the Horn of Africa, a region including Djibouti, Eritrea, Ethiopia, Somalia, northeast Sudan, southeast Egypt and northern Kenya. Scholars classify the peoples of the Horn into four groups of family languages: the Cushitic, the Ethio-Semitic, the Omotic and the Nilo-Saharan. Though this classification is based on language affinity, these groups of family languages share common cultural traits within (sometimes across) linguistic boundaries. Therefore, I have categorized the peoples of the Horn into ethno-linguistic families, utilizing the terms used mainly for the linguistic classifications. In this article I will focus on the peoples of the Cushitic family.

The Afar-Saho Cluster consists of the (more than two million) Afar of southeast Eritrea, northeast Ethiopia and Djibouti, and the Saho of southeast Eritrea and northern Ethiopia. The Afar are fierce, warlike, nomadic and live by herding camels, while the Saho are comparatively more agrarian. Recent attempts to evangelize the Afar have resulted in many coming to Christ.

The Beja Cluster are pastoralists who inhabit southeast Egypt, the coastland of Sudan and western Eritrea. Estimated at 2.3 million in three main peoples, most Beja speak Bedawiyet. Though efforts are underway to reach the Beja, only a few evangelical believers are known.

The Somali Cluster inhabit the former Federal Republic of Somalia (nine million), the Somali Region of Ethiopia (five million), Djibouti (400,000) and northern Kenya (one million). Many are pastoralists, and they comprise two major families of clans: those that speak standard Somali (such as the Daarood and Dir), and those that speak Af-Maay (which include the Rahawiin and the Digil). Most Somalis adhere rigorously to Islam; conversion to Christianity is not tolerated. The many efforts to evangelize the Somali have yielded few followers of Christ, and most of these have lived as secret believers or fled for their lives. Recent days have seen small success in evangelization in Somali refugee camps and among Somali children.

The Oromo Cluster is the largest cluster, consisting of 30 million people in 14 people groups. The cluster is divided into 50% followers of Islam, 40% followers of Christianity and 10% followers of ethnic religion. The majority of the Oromo are agrarian, though some like the Borana are pastoralist. In the last six years efforts to reach the Muslim Oromo have seen thousands come to Christ and hundreds of churches planted.

God is doing His marvelous work of redemption among the peoples of the Horn. Our ministry, in partnership with indigenous churches and ministries, has seen the starting of 15 Disciple-Making Movements (DMM) among the Horn of Africa people groups in the last six years. DMM is a process of spreading the gospel with the intention of making disciples who learn to obey the Word of God and quickly make other disciples who then repeat the process. We define a DMM as rapidly multiplying churches (100 or more), four generations deep, occurring within three years. The table below summarizes the outcomes of the DMMs in the Horn in the last six years.

We praise the Lord for this advance of His Kingdom in the Horn. However, we feel that these are the firstfruits; more needs to come until the Horn “will be full of the knowledge of the Lord as the waters cover the sea.” (Isaiah 11:9) Therefore, we feel much need for united prayer, for more laborers and the tuning of our vision and strategy in line with the Word of God and the guidance of the Holy Spirit.

Justin Long is a missionary researcher with Mission to Unreached Peoples and the author of a 2012 Cushitic Cluster Forecast, available from his website, www.justinlong.org. Here are a few of Justin’s findings.

1. The slightly higher birth rate among Muslims in the Horn is not enough to overtake the 53 million Christians in Ethiopia, but does complicate evangelism and discipleship. This rate is not declining.

2. The peoples have chosen a rural, nomadic, disconnected life, making them physically difficult to reach. They are not urbanizing.

3. It is virtually impossible for outsiders (missionaries) to immigrate in and settle among these peoples for long periods. Creative methods of access are required.

4. Food insecurity is the biggest factor. Droughts average two out of every five years. Deforestation and warming make this worse.

5. Most live in absolute poverty, on less than US$1/day. Farming and herding are their life, and this is not likely to change.

6. Wars have been fought for generations due to resource competition, governmental exploitation and rebellion. Any peace is fragile and unlikely to last.

7. Corruption, piracy, trafficking and smuggling are all thriving in the absence of firm, honest government, and threaten the Church.

8. Malnutrition reduces the ability to learn, work and thrive. The average lifespan is in the 40s, a very short window for evangelism.

9. Religion is a key part of tribal identification, and important for the survival of the individual and the family. Choosing Christ can be a death sentence.

10. Christianity is widespread among the Oromo, but tiny elsewhere. The above are barriers that prevent rapid spread. Given this and the lack of workers, significant church growth before 2025 seems improbable. May God prove me wrong. If you’re looking for a challenge, this is it. 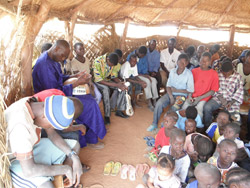 With Emphasis on the Fulani Cluster of Peoples

My name is Mumin abdal Masih; I am a Fulani. As my father used to say, “To be a Fulani is to be a Muslim.” So, I was raised as a Fulani, as a Muslim and as a herdsman. My father’s plan for my life was to be a Muslim cleric. As I grew, my dream was to be a devout Muslim and also to see every person become a Muslim because I was taught that Islam is the religion that God desires for all humanity.

But today I am a disciple of Jesus Christ. He found me, showed me His love and drew me to Him. Now my dream has changed: I dream and pray that not only will every Fulani come to know Christ and be His disciple, but that he or she will be a witness for Christ to reverse the fact that the Fulani spread Islam in Africa. Now we should spread the gospel and the love of Christ in Africa and beyond.

I would like to introduce you to my people, and I pray that you will join others who are obeying Christ and are making obedient disciples among the Fulani.

WHO ARE THE FULANI?

The Fulani are counted among the unreached people clusters and also among the most resistant peoples to the gospel in Africa. More than one Christian missionary to the Fulani has become discouraged and given up after years of ministry without success. But the Fulani can be reached and turned into a powerful missionary force for the glory of God. God can do it, and He is doing it. We are seeing small sprouts of such growth today in different countries in Africa.

About 20 million Fulani are spread throughout 20 countries in Sub-Saharan Africa. Some Fulani are nomadic, others herd cattle, and others are merchants. They keep themselves separate from other peoples. They practice and propagate Islam throughout Africa. They have been and still are influential in politics, economics and religion throughout West Africa, and they have influenced the history of other major people clusters such as the Mossi and the Hausa. In many places in West Africa the Fulani provide the Islamic scholars and clerics.

THE PULAAKU:
UNDERSTANDING THE FULANI

To understand the Fulani people, one should understand the Pulaaku—what differentiates Fulanis from any other people group, including other Muslim peoples. The Pulaaku, put together with cattle, Islam and Fulfulde (the language of the Fulani), provide the foundation to be a true Fulani, a dimon. Laawol Pulaaku (the way of being a Fulani) is characterized by three virtues: 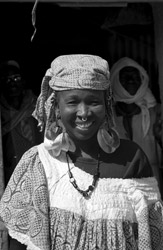 • Munyal is being patient and enduring any difficult situation. Munyal requires courage, self-control and discipline (physical and mental).

• Semteende is shame and also being modest. The Fulani must avoid anything that can bring shame. For that he must restrain himself and show self-control. Any demonstration of weakness in the face of difficult situations, or not behaving according to social codes, brings shame.

The Pulaaku is a way to the heart of Fulani people. Let them see the Pulaaku in the gospel, and they will follow Christ.

WHAT GOD IS DOING AMONG THE FULANI

We now see initial breakthroughs or sprouts of Church Planting Movements among the Fulani in several countries in Africa. More than 35 Fulani missionaries are reaching out to their own people and planting churches. Through one project launched in 2009 we have seen 542 churches planted in 11 countries, and in three of these countries there are more than 100 churches.

God is using scriptural principles of Church Planting Movements, and agencies such as CityTeam International, to make a difference among the Fulani. I believe that as more non-Fulani missionaries (Western, African,
Asian, Latino, etc.) and Fulani Christians join together to implement Church Planting Movement principles among the Fulani, we will see God changing the spiritual landscape. We will see disciples of Christ emerging and changing the spiritual landscape of Africa as the Fulani did centuries ago.

To learn more about the Fulani, see the following websites:

DSK has served as a researcher, church-planter and community development worker for 24 years. DSK may be contacted at .(JavaScript must be enabled to view this email address).

Mumin abdal Masih is a trainer and mentor coach for Church Planting Movements among unreached peoples. He is a Fulani and has the dream of seeing any Fulani Christian become a missionary. Contact him at: .(JavaScript must be enabled to view this email address).