Editor's Note: Selected portions of this essay have been adapted from Chapter 28 in Worship and Mission for the Global Church: An Ethnodoxology Handbook (hereafter Ethnodoxology Handbook) and from my chapter, “Encounters: What Happens to Music When People Meet,” in Music in the Life of the African Church, eds. Roberta R. King, Jean Ngoya Kidula, James R. Krabill, and Thomas Oduro (Waco: Baylor University Press, 2008), 57–79.

Some churches and religious movements in Africa have from the very beginning sung their own locally composed music.1 However, many, if not most, other churches—particularly those founded by Western mission societies or organizations, beginning with the chanting of the first Latin Mass on the west coast of Africa in 1482—have passed, or are currently passing, through a number of stages on their way to developing a music for worship they can call their own.

The six stages we will examine briefly are: importation, adaptation, alteration, imitation, indigenization, and internationalization. We do not mean to imply that all churches have passed through every one of these stages or have done so in this precise order. However, the stages occur frequently enough to be helpful for ongoing reflection.

Stage 1: IMPORTATION—Where hymn tunes, texts, and rhythms all originate with the Western missionary

For much of Africa’s church history, the hymns of Watts and Wesley or portions of the Latin Mass were simply taken over from the West and reproduced as accurately as possible by new believers in African worship contexts. Interestingly, with time many African Christians came to genuinely cherish Euro-American music traditions and consider them as “their own.” Asante Darkwa, speaking for many other Ghanaian Christians, has noted that

the hymn tune is perhaps the most commonly understood form of Western music by literates and preliterate Africans. Christians sing their favorite hymns not only at church services but also at wakes and burials and in other situations in which they find solace and comfort in those ancient and modern hymns which have done a wealth of good spiritually to Christians all over the world.2

Not all Africans, however, have felt as “at home” with Western musical traditions as this might suggest. For many, there has persisted a lingering, underlying sense of alienation, of “spiritual unsuitability” with the Western music legacy introduced by the missionaries. Nigerian E. Bolaji Idowu stated it harshly years ago when he wrote:

Again and again, as we have observed, choirs have been made to sing or screech out complicated anthems in English while they barely or do not at all appreciate what they are singing…We must not be deceived by the fact that people have borne their martyrdom to this affliction without complaint so far.3

And so we move to what often follows as the second stage of hymn development.

Stage 2: ADAPTATION—where imported hymn tunes or texts are in some way “Africanized” by rendering them more suitable or intelligible to worshipers in a given setting

At the adaptation stage of development, nothing is substantially changed with the imported hymn tune or text. But an effort might be made to adapt the tune to the context of a particular faith community by introducing the use of drums, rattles, or other locally produced instruments. The West African Cherubim and Seraphim Church frequently does this with well-known Western hymns such as “What a Friend We Have in Jesus,” accompanied variously by harmonica, drums, electronic keyboards, or cow bells.4

Or again, the decision might be made to translate the text of a hymn from a Western language into a locally spoken one—a practice generally as helpful to new converts as it is satisfying to the missionaries themselves. “You cannot appreciate what it means to hear ‘Nothing but the Blood of Jesus’ sung in a strange language away out in a bush town!” reported Christian and Missionary Alliance workers in 1930, one year after their arrival in Côte d’Ivoire.5

We must note here, however, that translated hymns—though perhaps more fully understood than those remaining in a “foreign” language—are often little more than “shortcuts,” “temporary stopgaps,” and “from the point of view of their art, not the best.”6 One common predicament is that many African words, based on tonal patterns, have their tones (and meanings!) altered when they are sung to Euro-American tunes. One serious case is reported by Idowu where the English expression “miserable offender,” translated into Yoruba and sung to a certain European tune, became “miserable one afflicted with tuberculosis of the glands.”7

Stage 3: ALTERATION—where some part of the missionary’s hymn (tune, text, or rhythm) is replaced or otherwise significantly modified by an indigenous form

What happens at the alteration stage is more than a simple “translation” of Western tunes (with rattles) or texts (with language) into an African idiom. There is rather a substantial alteration or total substitution of some part of the Western hymn by tunes, texts, or rhythms of indigenous composition or flavor. Examples of this type of modification might be: (1) where Western tunes are retained, but new, locally written texts replace the Western ones;8 or (2) where Western texts are retained and put to new, locally composed tunes.9

Stage 4: IMITATION—where tunes, texts, and rhythms are locally composed or performed, but in a style that is inspired by or replicates in some way a Western musical genre

“Nearly all the well-known Ghanaian composers, as well as students, have tried to write hymn tunes,” according to Asante Darkwa.10 One of the most famous of these was Dr. Ephraim Amu, who as an expert in Ghanaian traditional music also studied at the Royal School of Music in London, 1937–40. He eventually composed and published a collection of forty-five choral works.11 Illustrations abound across the continent of African musicians who have composed songs for worship, for example, in the styles of nineteenth-century revivalist hymns, southern gospel, four-part male quartet arrangements, and increasingly on the contemporary music scene in the popular genres of “praise and worship” choruses, country and western, hip-hop, reggae, and rap. 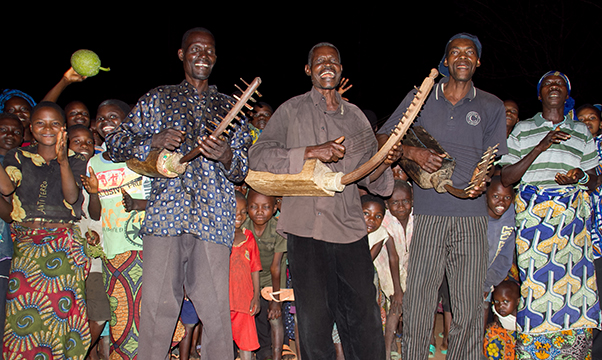 Many first-generation Christians in Africa have resisted using indigenous tunes, languages, and instruments in worship because of the emotional and spiritual associations these tend to conjure up from their former lives.

What is also true, however, is that nothing more inspires and brings to life the church in Africa than singing and dancing the indigenous “heart music” of the culture. Whenever such music is introduced into the African worship experience, something almost magical immediately sets in. “At once,” writes Idowu, “every face lights up; there is an unmistakable feeling as of thirsty desert travelers who reach an oasis. Anyone watching…will know immediately that [the] worshipers are at home, singing heart and soul.”12 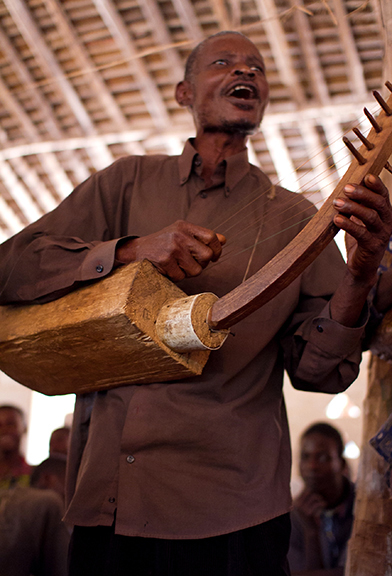 Indigenous, locally composed music does not need to be the only diet for the church. But a healthy church will make it a goal, for “when a people develops its own hymns with both vernacular words and music, it is good evidence that Christianity has truly taken root.”13

Stage 6: Internationalization—where tunes, texts, and rhythms from the global faith family beyond both the West and one’s own local context become incorporated into the life and worship of the church

This stage is the newest, almost unexplored frontier of worship music for the church. In contrast to “contextual” music, it is what the 1996 Nairobi Statement on Worship and Culture has called “cross-cultural” music.14 This will be the encounter of the twenty-first century, vastly broader and richer than the bilateral relationships that have characterized so much of the colonial experience between Europe and Africa up until now. The internationalization of music today moves us ever closer to the biblical vision of where all history is headed—the vision of a coming day described by the evangelist John in Revelation 7:9,10 when all languages, tribes, and nations will together proclaim, “Salvation belongs to our God, who sits on the throne, and to the Lamb.”

When one stops to consider the sheer volume of musical production being generated across the thousands of movements and denominations and the tens of thousands of local worshiping communities in Africa today, it simply boggles the mind.

Perhaps the life and counsel of Ghanaian hymn composer and ethnomusicologist Ephraim Amu is the best we can do in imagining how multiple music traditions can coexist as separate yet hybrid realities. Amu as a young student and professor during the peak of the colonial era of the 1930s and 1940s consciously chose to free himself from the cultural expectations of his day by refusing to dress in Western-style clothing and wearing instead traditional Ghanaian cloth made from locally spun cotton. Amu lived biculturally and reportedly loved to serve soup to guests in earthen pots and water in calabashes on a table adorned with imported cutlery. “There is no harm in embracing the good things of other cultures that have universal values,” Amu once said, “but by all means let us keep the best in our own.”15

James R. Krabill—M.Div., Ph.D. (African Studies, Univ. of Birmingham, U.K.), Senior Executive for Global Ministries for the Mennonite Mission Network, educator and speaker, ICE Board of Trustees, author and editor of numerous scholarly journal articles and several books, including Music in the Life of the African Church (Baylor University Press, 2008) and Worship and Mission for the Global Church: An Ethnodoxology Handbook (William Carey Library, 2013).