The Commissioning of a Generation

It’s all about Obedience

This very moment, there are believers around the world on the cusp of taking the next step for the Lord.  In the eyes of some, that step may seem small, like sharing the gospel with a coworker, or it may be as large as selling a house and moving to a new country for Jesus.  Either way, the size of the step is not what matters; rather it is that the Lord has spoken and now we get the privilege of following Him where He calls.  Though at times what He speaks may seem difficult, for all of us professing Jesus, we are called to obey Him.  His statement in the Great Commission still stands: “Teach them to obey everything I have commanded you.”

In the world, and even in a Christian culture where obedience sadly feels like a dirty word, we are God’s people who are to follow wherever he calls.  “Jesus is Lord” is a bold statement that we profess.  And we are not just to obey His call, but also to teach others to do the same.  If only our minds could truly see that obeying God is not a matter of drudgery, but a privilege to be honored.  But as many of us can attest, obedience is generally not easy.  I’m sure it was not easy for Abraham to step out toward a land he did not know.  Or easy for Moses to approach Pharaoh and say, “Let my people go.” Was it easy for Noah to build the ark when there was no rain?  Was it easy for John the Baptist to become less, so Jesus could become more?  Was it easy for the disciples to receive beatings, persecution and, most of them, death for the faith?  Was it easy for Saul to convert from Judaism and become Paul and tirelessly work for the sake of the kingdom?  And even Jesus himself—was it easy for Him to submit his life to the cross? Yet even He said, “Not my will, but yours be done.”  In a Christian culture that is fearfully sitting on its hands waiting for “open doors,” we have Scriptures full of people who walked by faith, striving toward what was ahead, even when the door didn’t feel very open.  So when the Lord speaks, how will you respond?  Stepping out in these times is something we call Immediate. Radical. Costly. Obedience.  Most people who are used mightily by the Lord learn to operate in this this kind of radical and immediate obedience fluently.  Let me be clear: This does not mean it is easy; it just means they have learned that He is Lord. God loves to take fragile vessels like this who have been faithful in small things and entrust more to them.  In doing so, faith is built, but apart from obedience, I can hardly imagine how faith can grow. 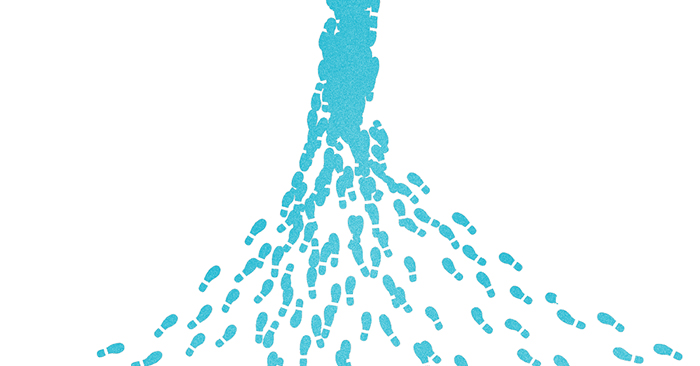 To make this point, a friend of mine named Curtis shares a story of training the leaders of one of the top five underground church networks in China.  The theme of the time together was the Lord gathering people from all different tribes and nations into His kingdom.  At the gathering, Curtis put a world map on the wall and began to explain some of what was taking place with Christianity in various countries.  This group had essentially been cut off from global Christianity for the previous 40 years, so they were scrupulously writing notes.  While that training was coming to a close, the Lord laid it on Curtis’ heart that one of the people in the room was called to foreign missions.  This was an uncommon thing for a Chinese believer in that time.  It was more common for people to travel throughout China to share Jesus, but not often outside of China.  He shared what the Lord spoke to him with the believers gathered, and hearing this, the group decided to pray for 10 minutes and search God to see who it was.  After praying, the question was asked whether the Lord had laid it on someone’s heart.  No one responded.  So they prayed again for ten minutes.  Again, no one responded.  So another time, they sought the Lord, but yet again, no one responded.  This happened seven times, but after the seventh time, a woman started crying and said, “It’s me.  Even before you asked the question the first time, when the map was put on the wall and Burma was talked about, the Lord told me I’m called to Burma. But I don’t know anyone there, the language or how I could support myself. But the Lord has spoken and I will obey.”  After this, the believers in that room spent some time commissioning the woman to be sent out.  By the time they finished, it was early into the next morning and Curtis took some time to sleep, but he awoke three hours later.  He looked around and seeing that the girl was not there, he asked a man where she had gone.  Somewhat confused by the question, the man looked at Curtis and said, “She is gone.” Curtis asked if it was her turn to get food for the group, but the man still somewhat confused by the question said, “The Lord called her to Burma.  She has gone.  While you were sleeping, the Lord raised up another woman to go with her.  After this, we emptied our pockets and there was just enough money for two one-way bus tickets to the border of Burma and China.  They took the first bus out at 4am and we are just now getting back from dropping them off at the station.”

So now, right where you are, imagine the map of the United States in front of you—or better yet—pull a map out to look at. Now look at your state… your county…all the way down to the census tract level. Will we be a part of what God is doing in this generation? Will we join hands together in seeing the Gospel of the Kingdom leavened into every county and census tract in our nation and beyond?

Immediate. Radical. Costly. Obedience.  If we do not go where God calls and where we need God, how can we expect to see God-size movements?  So when God calls you, will you go?  Whether big or small, will you obey?  Even when it is hard, may our mindset be that it is an honor and a privilege to follow no matter how narrow the path.

Neal Karsten lives in West Michigan with his wife and three daughters where they have been living out disciple-making and church multiplying principles.  Working in the traditional church as a pastor while doing simple church on the side, he was recently called away from traditional pastoral work to join with Biglife ministry and now trains others in multiplying principles.

.(JavaScript must be enabled to view this email address)
zumeproject.com | http://WWW.BIG.LIFE