God spoke to Habakkuk and said, “Look at the nations and watch—and be utterly amazed. For I am going to do something in your days that you would not believe, even if you were told.” (Hab 1:5) Certainly, researcher Dr. David Garrison’s plenary address at the 2015 “Finishing the Task” (FTT) conference suggested that God is still doing amazing things, maybe now more than ever. Garrison reported to the 500 FTT delegates gathered at Saddleback Church in Los Angeles that during the first 13 centuries of Muslim-Christian interaction, tens of millions of Christians had converted to Islam. During this same time period, Dr. Garrison found only three possible movements of at least 1000 Muslims from an Islamic community being baptized into any expression of Christian faith. But between the years 1970 to 2000, there were 11 such movements —more than the combined total of the previous 1300 years. And during the ramp-up of the new century, from 2000 to 2013, there were already 69 such movements. Certainly it would appear Garrison is justified in his conclusion that we are now living in the midst of the greatest turning of Muslims to Christ in history. By implication—if God can do this among Muslims (previously thought to be among the world’s most resistant peoples) He can do it among any tribe, nation, or religion. And if FTT has anything to do with it, that’s exactly what will happen.

Finishing the Task is an association of churches and mission agencies who want to see reproducing churches planted among every single people group in the world. Learn more about the vision of Finishing the Task by watching the video at vimeo.com/29620997. In 2006, FTT identified 639 unreached, unengaged people groups (UUPG’s) with populations above 100,000. Since then, church planting has now reported in over 568 of those people groups. Every year, FTT stages a gathering to inform, network, challenge, and inspire. In addition to Garrison, the 2015 gathering featured Paul Eshleman, Director of the network, along with Francis Chan and Rick Warren. (Watch the complete keynote speakers—all of them—by watching the video at http://www.finishingthetask.com/videos.html)

The 2015 FTT event was radically different than any previous gathering. Attendance at the first 8 gatherings had averaged 30 or 40 participants. In 2014, attendance doubled. But over 500 individuals gathered at the 2015 event, signaling a sharp increase in interest and participation. Many of these new attenders were leaders and lay members of local churches, a change that seemed very welcome by everyone participating in the FTT network.

Of course, of major value each year at FTT are the resource materials, including spreadsheets and resource listings for FTT’s listings of remaining unreached and unengaged people groups. (You can find and download free copies of every handout and PowerPoint at tinyurl.com/FTT2015.) 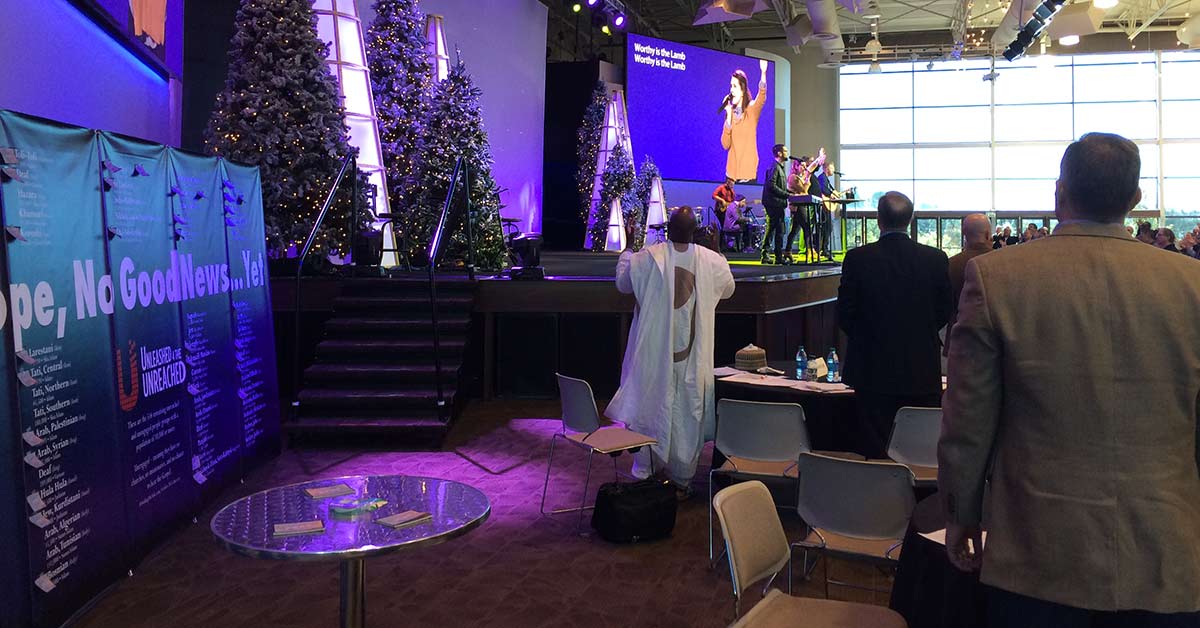 Still, one highlight of the 2015 event will be tough to capture in downloadable reports. There was definitely a pronounced “buzz” about the exciting upswing of Kingdom movements springing up around the planet. You could catch it in the plenaries, the workshops,  the tracks, and even during the mealtimes and breaks. I’m sure my own application is representative of many who are catching the “FTT vision.” Like many, I had grappled with the challenge of understanding and communicating the remaining task. In my own case, the agency I lead, Team Expansion, had volunteered to create a “Wall of Unengaged Peoples” in hopes of articulating the vision. When FTT leaders learned of the 75-foot exhibit, they decided to integrate it with the stage in the auditorium where the plenary sessions took place at Saddleback. (See accompanying picture.) Throughout the conference, delegates could write prayers on sticky notes, then affix them in squares associated with each of the remaining groups. Many said the wall helped them see that the task remaining is indeed reachable. Let us join with Finishing the Task in finishing the task of the Great Commission. Let’s pray, plan, and commit to act—to expand Christ’s kingdom through rapidly growing kingdom movements toward heaven. May He be blessed and worshiped among all peoples in all places... and then may the end bring His lasting peace.

Note: The dates for this year’s FTT Conference is December 6-8, 2016. To participate, simply send an email to [email protected]. Learn more about Finishing the Task at http://www.finishingthetask.com To bo.ok the Wall of Unreached Peoples at your church or event, go to http://www.u4theu.com/book-the-wall

I love what is going on in this Movement. I will love to be part of it, right away.

Doug has served as both missionary and president of Team Expansion, a global mission, prayer, and disciple making organization active in over 40 countries. Based in Louisville, Kentucky, he longs to see more people come to Jesus, and is passionate about disciple making. Toward that end, he and a colleague have launched the website http://www.MoreDisciples.com .

Email: .(JavaScript must be enabled to view this email address)
Website: http://www.finishingthetask.com