Book One of No Place Left A Saga of Destiny Fulfilled

I received an advance copy of Steve Smith’s Hastening and read it with great anticipation. I was captivated by the thought of a novel focused on finishing the task among the peoples of our world, as I have taught “The Task Remaining” (Chapter 9 of Perspectives) and spent much of my life researching what God is doing among His peoples. Knowing Steve and loving his former book, T4T: A Discipleship Re-Revolution,[1] I was eager to read my IMB colleague’s first novel.

Hastening is a page-turner. It explicitly and unapologetically voices the longing many of us feel for the day when there is no place left where the gospel has not been preached (Romans 15:23). For that day to come, followers of Christ must awaken to our part in Christ’s mandate for us to disciple all nations. This is the awakening for which Hastening strives.

Hastening is the first book in the “No Place Left” saga. The second—Rebirth—will be available in early 2016. Steve hopes the popularity of this series will parallel Peretti’s This Present Darkness, Young’s The Shack, Lahaye’s “Left Behind” series, or even Platt’s non-fiction title Radical. And with God’s blessing Hastening may do just this. The story offers readers a fresh urgency and purpose to identify with unfolding events in a time where sacrificial service is the new norm. 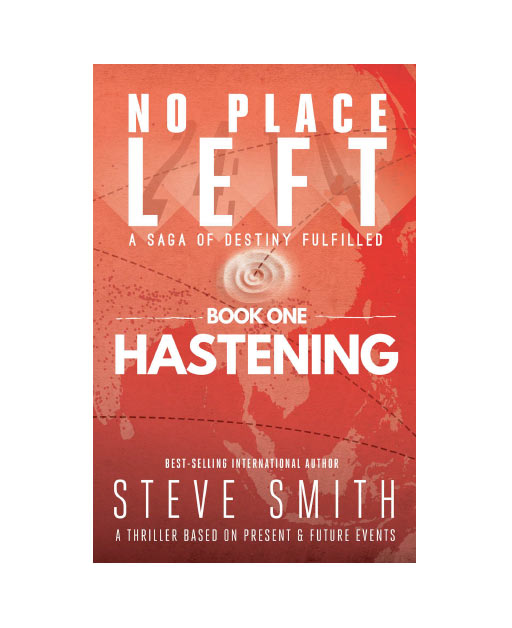 So how does Hastening awaken believers to God’s purpose?

Have you ever imagined you were destined for something greater? The protagonists in Hastening do. Others come alongside them to fan the Spirit’s flame, and soon they are co-laboring on a life-changing quest.

The novel carries us along with excerpts from one character’s journal, and her weakness culminates in a forged strength many of us hope for in our spiritual life. In short, she “commits” and calls readers to answer the ultimate question for every disciple—“Are you ‘all in’?”

Hastening makes the goal clear—we work with anticipation for the day when the good news of God’s Kingdom is being preached in all the world as a testimony to every nation. Hastening fuels the desire to see this happen in our own day. And, this is a compelling mission objective for believers and churches.

As one protagonist notes, those who pursue Christ in whole-hearted obedience challenge the status quo and may be labeled fanatics or quacks. Yet Steve doesn’t back down in calling for a new breed of believer—one with Bible-based faith committed to the possibility of Christ coming in our generation.

One character in Hastening acknowledges that “it’s a challenge for pastors to send their members out to the nations, and it’s hard for church members to develop the confidence and skills to actually go.” However, Steve’s experience-based confidence in God’s provision for teams leads him to illustrate that the resources for the unfinished task are already present in the harvest field, awaiting only a harvest force willing to believe God and activate those provisions trusting God for movements.

Hastening will stir bold expectancy in your faith as you read how this emerging cadre of dedicated recruits wades through torrents of spiritual opposition to find “persons of peace” among lost men and women in unengaged peoples living in hard places.

Hastening will also challenge mission leaders and pastors to mobilize teams beyond their capacity and to send out sheep among wolves. Are you ready for such leadership challenges?

With this said, I was concerned in the early stages of the book with two things.

First, I was concerned with the use of a militaristic theme as a mobilization and training strategy for churches seeking to be engaged in missions.

“. . . the only way to complete the mission was full-scale ‘military’ mobilization of the whole global Church, fueled again by an expectation of the imminent return of Jesus Christ.”[2]

This was troubling for me because the missions community has recognized that “certain words and images long employed to call the church to mission have increasingly caused offense to the very people with whom we are seeking to share the Good News.”[3]

On the other hand, in the New Testament we see Paul referring to his missionary band and co-laborers as fellow soldiers[4], and he used wartime motifs in his call to godly living.  Like soldiers, followers of Christ must lay down their lives for a different warfare—a warfare motivated by love for Christ and sacrificial love for the lost.

Second, I was concerned with the hermeneutic of Matthew 24:14[5] presented early in the book:

“If we can get the gospel to all the remaining unengaged, unreached people groups, the task   Jesus described in Matthew 24:14 could be finished! Finished!”[6]

Engagement is a critical step, but engagement with a team or two still leaves many places and people lost.  We must be very careful not to imagine that initial engagement alone will characterize the final generation. Our goal must be disciples marked by “holiness and godliness” who are themselves seeking to “hasten the day” (2 Peter 3:11–12).

As the characters in the book grow, their understanding of engagement grows.  They come to understand through their experiences that kingdom movements are the way to engage a people group so that the gospel of the kingdom saturates an entire people group—every geographical area and every segment.  Likewise, the characters grow in their commitment to the gospel of the kingdom even though they face stiff resistance.  Like them, we must grow “from faith to faith” (Romans 1:17), “working out our salvation with fear and trembling” (Philippians 2:12).

In Hastening, the characters are severely tested, and they come to a point where they realize the difficulty of the unfinished task.  They realize that they may not be the ones who bring about the last generation.  But as they decide how they will live out their faith and calling, they affirm, as the author calls for us to affirm, that “[God] has chosen someone to finish the task and appointed the times and seasons of their final work. If we are the ones He has chosen, we’re not speeding God up; God is speeding us up to usher in the day He prepared long ago.”[7]

Read Hastening; grow through what you experience in the pages.  Act on what you learn.  If enough pray and give their lives, we could be the generation that is able to say “there’s no place left.”

[3] Consultation on Mission Language and Metaphors, School of World Mission, Fuller Theological Seminary, June 13, 2000. Those taking part in the consultation acknowledged that “warfare” metaphors and terminology are increasingly counterproductive to mission work and can risk the lives of local believers.

Jim Haney serves as Director of Global Research for IMB.  Before moving to IMB staff in 1999, Jim served in various capacities with IMB in West Africa as a church planter, and national director of evangelism for the Ghana Baptist Convention.  Jim serves the evangelical community as a research consultant, particularly related to people groups, and has served with IMB for 35 years.

Email: .(JavaScript must be enabled to view this email address)
Website: http://www.peoplegroups.org