Hope for the Nations

A Review of Wayne Grudem and Barry Asmus' book The Poverty of Nations: A Sustainable Solution

“I’ve been waiting for a book like this for a long time. Wayne Grudem and Barry Asmus have brilliantly written a work that is at the same time completely biblical, historical and practical… It should be required reading in every Christian college and seminary, by every relief and mission organization, and by every local church pastor. At Saddleback Church and in all churches participating in the P.E.A.C.E. Plan, this book will become a standard text that we will use to train every mission team we have in 196 countries. 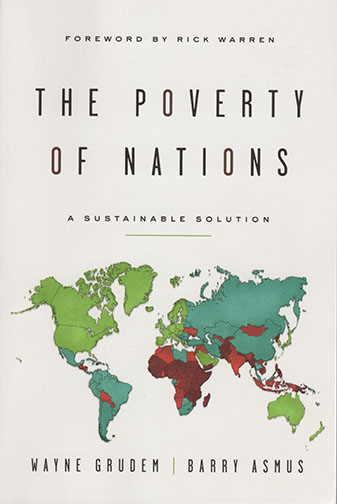 Two years from now, in 2016, Niran, his wife, and his five children in a rural southwestern Nigerian community will bow together in family worship without aching, empty stomachs. They will give money at church, dream about a college education for one of their children, and, most of all, transcend a subsistence lifestyle for the first time ever.

Here’s how this could become reality…

Nigerian pastoral, government, and business leaders will have spent the summer of 2014 digesting and applying the remarkable ideas in The Poverty of Nations: A Sustainable Solution (2013). As they read the text, they learn to cast off ancient practices. For example, after reading chapter 6, these leaders confront their need for moral virtue (i.e., lives free of corruption), which is necessary for success in the marketplace. As they learn in Ch. 3 about the benefits of the free market, formerly corrupt officials stop demanding bribes for the registration of land titles. Instead, they promote reforms in the capital city, Abuja, thus making property ownership widely accessible.

This discussion in the summer of 2014 won’t be easy. False ideas, many rooted in ancient animism, must be confronted. For example, the old idea that there is only so much wealth to go around—“zero sum” thinking—is exposed as a lie in the book’s section on “Cultural Beliefs That Will Encourage Economic Growth.” It is also hard for leaders to acknowledge that they haven’t used their power for the benefit of their people. And until they do, their communities will remain desperately poor (chapter 7).

Of course, Niran’s pastor will rejoice in 2016 because he and his family don’t have to go to bed with empty stomachs either. You see, Niran and his countrymen learned what government leaders are teaching from chapter 9—that having material wealth should never surpass the desire for spiritual wealth. As a result the offering basket in their church is now full, Sunday after Sunday. Niran and his fellow parishioners finally have an abundance from which to give and fund missionary expansion of the gospel.

Every mission executive and pastoral trainer who wants the preceding possibility to become reality needs to read, digest, and seriously discuss The Poverty of Nations. This one-of-a-kind handbook is ready-made for those who need a blueprint, a roadmap for turning around struggling societies. Nine chapters are devoted to developing 78 principles (sometimes called steps, factors, or laws) that, if taken, can lead whole nations out of poverty. The authors argue that many, if not all, of these principles have been researched and time-tested in nations around the world. The book, thus, is a prescriptive text for the missional problem solver, not a thoroughgoing academic analysis that aims at description. The book is prescriptive and its scope is national. In other words, its unit of transformation is the nation-state. It is rare among writers in this postmodern era to rise above the level of the tribe (or people group) and yet remain below the level of international institutions. The authors justify this national focus by claiming that “the primary causes of poverty are factors that affect an entire nation” (p. 25). Thirdly, the text is comprehensive. Contrary to various reductionisms, poverty remediation requires simultaneous transformation in three spheres: cultural (social), political, and economic. This insight alone makes the book a valuable treasure, in my opinion: The three spheres are interrelated domains of human existence, culture being the most fundamental of the three. The authors seem to agree, as nearly half of the principles are defined by the (misnamed) heading “nation’s values” (p. 369).

Recognizing that economic development is essential to escaping the poverty trap, the authors claim their book transcends others by focusing on the “nationwide laws, policies, and cultural values and habits that determine so much of the course of economic development in a nation”(p.26). Needless to say, the authors are unapologetically committed to free market economics. Research overwhelmingly confirms the effectiveness of the free market model, as opposed to various redistributive schemes in favor with international developmentalists like Jeffrey Sachs of Columbia University.

The book’s emphases on sustainability, reproducibility, and non-dependence on Western resources align nicely with missionaries’ church-planting objectives. Pastors should welcome the message that salvation is not merely spiritual, but that many of their congregants are called to undertake entrepreneurial initiatives. Government agents in their congregations will learn to adopt policies which encourage rather than dampen economic development.

The single greatest fear of many missionaries, I suspect, will be that some of the ideas, if taught, will be viewed as hostile to the political authority of their host countries. Discretion and discernment will be required, because those who hear and take to heart what is taught will be changed. Most governments, of course, don’t like change that threatens their control. A second concern is that some of those who engage the text will take some of its ideas and shear them of their Christian roots while launching reform initiatives. The risk is real (think of the mid-19th century Taiping Rebellion that led to 20 million Chinese deaths), but the wise Christian interculturalist will admit that the gospel carries inherent political implications, as Vishal Mangalwadi explains in his classic text Truth and Social Reform (1989). Shrewd and effective Bible teachers will need to thread this needle while avoiding heresies. A third concern is that readers won’t understand the ideas sufficiently to teach them correctly (seminars will need to be organized). 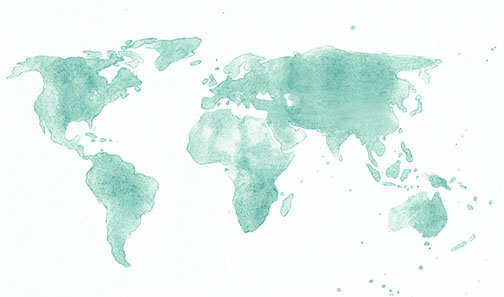 Those who use the book with groups as diverse as international students on the one hand, and Venezuela’s Yanomamo on the other, will need to frame their principle-oriented pedagogy so that it takes account of local realities. For example, predictable tensions concerning the superiority of private property ownership over tribal ownership will arise. Educated leaders will need to explain the tremendous wealth development potential of private ownership, while pastors will need to simultaneously teach against the corrupting practice of envy. Ameliorative institutions and mechanisms will be needed to soften the distortions and inequalities of private ownership. On this extremely critical matter, Grudem and Asmus not only offer biblical support for private ownership, but usefully engage authors like Hernando Desoto, Peruvian author of The Mystery of Capital (2003), who makes a strong case that billions of the world’s poor live on valuable property over which they have no legal title. Securing legal title is an essential early step that can then be parlayed for business development loans which are part of the poverty alleviation matrix.

Do I have cautions over the book? Most certainly.

First, the text fails to account for the growing impact of the global regulatory environment (fostered by international agencies) and its impact on national policies the authors recommend.

Second, the book is biblically and theologically thinner than one would expect. (Others can undertake in years to come the task of filling out the theological themes that will ultimately make this everyone’s go-to text on a Christian view of building nations that prosper.)

A third caution comes from a well-developed fear of utopianisms. While this is a very solutions-oriented text, I caution those who employ it to keep close at hand their doctrine of sin. Humans have massive capacities to prevaricate, corrupt, and otherwise diminish truth in order to make utopian claims that enrich themselves. Others will take these principles and impose them on the untaught. Replacing the gospel of Christ with a utopian gospel based on these principles would be no advance for human civilization; in the end, it would be a dark step back.

Fourth, the book risks becoming a formula for national improvement, a 78-step surefire restorative for Sick Nations Anonymous. Our neighbors are human beings, not human test tubes waiting for our scientific prescriptions. These principles should be applied with generous helpings of a Christ-centered gospel that announces a Savior who has come to “reconcile to himself all things, whether in heaven or on earth, making peace by the blood of his cross.” In this context the book can be used very effectively, especially with leaders in all sectors of society.

My last and fifth concern has to do with modernity, social unity, and Christian faith. The authors spend very little time warning that, unless gospel imperatives remain front and center in education, economic flourishing can lead to social diminishment and pathologies (as we have seen in Western countries). The Deuteronomy 8 warning against ignoring God once we become wealthy is as true today as it was thousands of years ago. Alexis de Tocqueville framed his brilliant Democracy in America (1835) around this question: As democratic man becomes established with political and economic freedoms, how will he maintain allegiances to the rest of society? History’s answer in the developed societies of the world is, “Not very well.”

Asmus and Grudem don’t offer an answer either, nor need they at this early stage. But those engaged in Christian mission and development who wisely employ this text around the world—along with Darrow Miller’s Discipling Nations (2001), Steve Corbett and Brian Fikkert’s When Helping Hurts (2014 edition), and Acton Institute’s The Poverty Cure video series (2012)—will need to invest great energy in finding contextualized answers to Tocqueville’s question. Only robust Christian faith will provide the enduring allegiances that offer genuine social stability, harmony, and assistance to those dislocated by free market mechanisms. It will be up to us to utilize various strategies that help the larger society to thrive while simultaneously deploying Asmus and Grudem’s text that empowers individuals.

We must remember that the larger end that alone makes sense of such endeavors is God’s kingdom, where “they shall build houses and inhabit them; they shall plant vineyards and eat their fruit…and my chosen shall long enjoy the work of their hands.” (Isaiah 65: 21-22 ESV) This is a text about human flourishing, and that is what drives Asmus and Grudem.

Tonight, there is a gaping, yawning emptiness in the seven stomachs in Niran’s family. He trusts Christ, and prays daily that their stomachs will someday be full. After the leaders in his community and his nation read this book, Niran and his family will have abundant reasons to thank the God who has not forsaken the righteous or let his children beg for bread. (Psalm 37:25)

As the Executive Director of the Wilberforce Academy, Bob Osburn trains college students as redemptive change agents in their home societies and workplaces.  He also teaches on religion and educational policy at the University of Minnesota, where he earned his PhD in international education in 2005.  His ThM is from Dallas Seminary. You may contact Bob by email at .(JavaScript must be enabled to view this email address) or by phone at 651-402-2600. For more information go to http://www.wilberforceacademy.org