A few years ago MF featured David Platt’s Radical, a strategic book for mobilizing the church. We are delighted now to feature Steve Smith’s thriller No Place Left saga, designed to carry the Church further in the same direction. This excerpt is from Hastening (Book One). 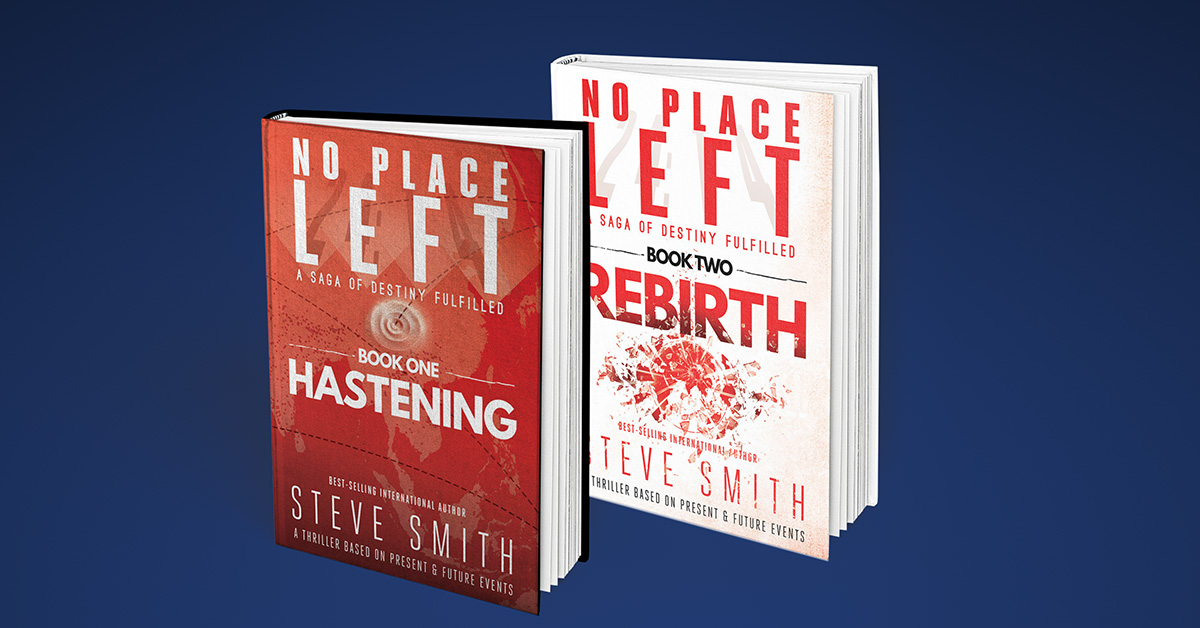 “Dude, haven’t you heard what’s happening?” Lance asked. “Christopher Owen has been speaking at all the campus fellowships, sending seven point shock waves throughout. He’s launched a high-powered missions group called the Kingdom Preparation Force. They’re saying we can help prepare for Jesus’ return. They’re talking 2025 as a target date. It’s kinda radical, but a lot of us are praying seriously about joining. A gap year for some, or for George and me …,” he grinned broadly, “after graduation in a few weeks!”

Phil’s eyes widened. “What? You guys are going to skip out on getting a job to join up with some new missions group? What will your parents think?”

“My parents are good with it!” Lance smiled broadly. “It’s only for a year,” he added. “And, ya know, the job market is kinda soft right now anyway. But I’ve also been thinking. I’ve been vainly pursuing the American dream. But 2025? Dude, that’s just ten years from now. I can do anything for Jesus for ten years!”

“It’s not just us, Phil,” George said. “A lot of folks are signing up. Of course, it will take more than a year to finish the whole task, but we’re starting with a one-year commitment. This is the real thing, man. It fits with what we know in our hearts and minds to be right. Christopher Owen has been around here longer than any of us. Even Professor Steward, from the history department, is part of this.”

“Professor Steward? Really?” Phil shook his head. “If what you’re saying is true, this may be it—just what I have been searching for!”

“Uh, probably not,” George said, glancing worriedly at Lance. “This isn’t for everybody. We’ll be going places missionaries aren’t welcome. There’s a lot of risk involved.”

But Phil wasn’t to be dissuaded. “Okay. Maybe I’ll give this Christopher guy a call.”

Lance grabbed Phil’s arm, perhaps a bit too firmly. “Dude, you’ll need to move fast. Our first meeting is May 24th, a week after graduation. Make sure this is what you really want to do. It’s going to be a tough year.”

Lance nodded. “Like it’s the pattern all Jesus-followers are supposed to have. You know, follow Jesus and fish for men.”

Kellie motioned for the three guys to come closer. “Do you guys know Ruth Grant?”

Phil raised an eyebrow. “That bashful nerd from math class?”

Kellie smiled. “Well, she’s raising havoc on campus. I’ve never heard anyone share the gospel so much. In fact, I hadn’t heard her say more than ten words until recently. But she led two sorority gals to the Lord just a few weeks ago. She’s been discipling them in the study center. And those two gals have now led so many of their sorority sisters to the Lord that they’ve formed a discipleship group in their sorority house living room.”

Lance laughed and looked around. “So that’s what happened! Now it makes sense. One of my ATO buddies was led to faith last week by a girl in their house. He’s now started a new group with several of the guys in our frat house at 6 a.m. on Tuesdays! Dude, nobody gets up at six!”

“All I’m saying,” said George, “is that this call Christopher Owen is making is not just to finish the missions task. It’s a call to return to biblical discipleship. They’re trying to start a discipleship movement here in L.A. before they leave for the nations.”

Kellie smirked as she spoke. “Ahem, my sister is Christopher Owen’s wife, Chara.”

George raised his hand to his mouth. “Oh my gosh! I hope I didn’t say anything embarrassing!”

Kellie playfully punched him in the arm. “Yeah, I’m keeping track of all you guys say! Seriously, though, Chara is telling me that just through Ruth’s touch, we have six new generations of disciples and groups! Greeks, athletes, math students, landscape workers on campus! It’s crazy!

“When I think about how shy and introverted Ruth is, if the Holy Spirit can do that through her, there is hope for me—for all of us. God wants to launch a discipleship revolution through us that will touch the nations. We are going to do there what we are doing here. Ruth is proof that it can work.”

She paused and nodded her head slowly. “I’m with you, Lance. I can do anything for Jesus for ten years! And my brother-in-law who’s leading the charge? He’s the real deal!”

Hello, I wonder if there is spanish version already?