May 01, 2015 by Devesh Harish Lal and Alexander Philip

This second summit was planned a little over seven years after the initial gathering in the state, where mission as transformation was highlighted and shared. Bihar state, home to over 100 million people and considered in yester years as the “graveyard of missions,” is one of the most backward areas of India.

Yet it was here that significant change has occurred since late 2005 resulting in progressive growth and statewide development. A change in government leadership, the prayers of God’s people, and the first TW event of Jan 2006 all have been catalytic in seeing major improvements here where less than 33% were literate a few years ago and where the per-capita income was US$35 per person per year then. Since, and in the providence of God, as dozens of mission agencies focused on Bihar state, multiplication of indigenous churches was spawned and hundreds of Christ groups have resulted. However, with a myriad of challenges before the burgeoning Church, it was felt that due consideration should be given to Toynbee’s cautious reflection: “Civilizations develop and flourish in response to the challenges they face with creative new ideas. When they are rigid, failing to respond to challenges, they decline.”

“Christians have played a key role in the development of Bihar–and must continue to do so,” said Uday Narain Choudhary, the speaker of the Bihar State Assembly and key leader of the government, who graced the inaugural as chief guest. Along with other Church leaders representing both the Protestant and Catholic Church, the inaugural was a time of celebration of what God has done and ongoing whole-hearted commitment towards His will and purposes for Bihar state.

The summit, which took place immediately after the TW Research conference, brought to all participants the “remaining task” of reaching 25 unreached people groups listed as “most needy,” with a call to also focus on 103 “very needy” people groups in Bihar state. Christ’s Missional Challenge group has taken to heart the vision and will focus on these remaining 128 groups, disseminating information, calling for advocates, raising 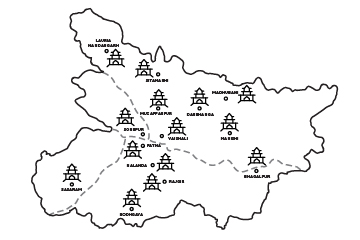 awareness and planting churches among these people groups. Earlier in the week, an FTT/Isaachar Initiative leader had commented “It is one thing to evangelize people–reach them with the Gospel message–quite another thing to disciple them so that an ongoing CPM starts within the people group.”

Making a foray into missionary services of the state, the Family Challenge group heralded the need to focus on the health of the families in the Church, issuing a strong call for care and sensitivity as societal values change globally and locally as well. A task force has been raised up to continue serving this need in Bihar with an on going teaching and facilitator role to missionary leaders, their families and agencies across
the state.

Ruslan Maliuta of the Orphan Challenge brought to enthusiastic Bihari participants the vision of a Bihar Without Orphans. With the average female lifespan at 54 and male at 52 less than a decade ago, thousands of children in Bihar are either orphaned or semi-orphaned early in life. Tuberculosis, leprosy and kala-azar are killer diseases in the state, where infant mortality (72/1000 live births) and maternal mortality (451/100,000) rates are among the highest in the world.  It was refreshing to see a real owning of this vision, to reconsider the way orphan care is typically done in institutions, and a plea was made to consider the godly exhortation that God himself “places orphans in families” (Ps 68:8).

Another key highlight of the conference was the information on the current Dalit caste- discrimination across Bihar. Explaining lucidly the role and place of OBC’s (Other Backward Classes) in the Indian society and political life, Ivan Kostka, facilitator, highlighted the receptivity of the OBC group to the Christ of the scriptures with a plea to prioritize serving them especially and planting churches among their ranks. The Forward Press magazine distributed among conference participants served to build information and inspiration. The Human Rights Challenge group led by Ivan also focused on the plight of trafficked women and child labor, with international NGO’s Justice Venture International and Nomi Network, sharing with the audience positive results in Bihar already in vogue and with plans for the decade ahead.

The foundation for a task force to reach the neighbor community has been created, with a plea to consider the urgency and dire need to raise up hundreds of followers of Christ groups among the neighbors (Relational Challenge). Hal Jones and Young David were instrumental in facilitating the formation of a Bihari group to focus sustainable development initiatives among the poor of Bihar (90% of Bihar is rural) with an ongoing plan of action to reach the poorest of the   poor   and   share   Christ’s   love   amongst the forgotten and downtrodden.

Tom Victor shared about the 4/14 vision and several groups of children shared at multiple plenary sessions reminding participants of the need to include an inter-generational dialogue and participation even in mission, raising up Esthers and Daniels for “such a time as this.” (Est. 4:14)

The summit served to unite the church in Bihar towards a compelling transformational vision. The Transform World platform network in Bihar is all about serving the needs of her people by aligning herself to God’s purposes and desires. Transformation is the progressive and ongoing measurable supernatural impact of the presence and power of God working in, through and apart from the Church on human society and structures.

The mission of Transform World 2020 urgently calls the Church in Bihar to consider the critical challenges of our time. We trust that God’s people all over the states–0.5% church population–will respond to each challenge through informed, cohesive, prayerful action leading to a godly, Spirit-led movement in the spheres of cultural influence in which they operate in and the geographic area in which they live and move and have their being.