Bringing Distance Learning Close to Those Who Need it Most

Three months after Ralph and Roberta Winter founded the USCWM they established the William Carey International University (WCIU), which is a part of the larger Frontier Ventures family of ministries. The Winters had been involved in Theological Education by Extension and WCIU was—in many ways—an extension of that idea.

WCIU was designed as a “distance” university, long before the Internet and the varied dispersed training available now. Ralph Winter had seen the need for men and women around the world to have acceptable credentials in order to gain respect—especially outside church circles. Ultimately, WCIU’s PhD program was planned so that non-Western leaders could establish their own universities and begin to grant their own 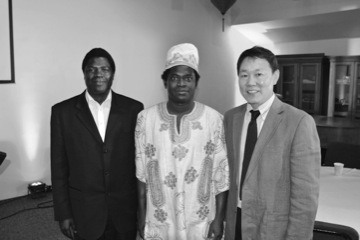 degrees—lowering dependence on the West for education and credentialing. WCIU would also offer degrees that the world could understand, like the MA and PhD, and the subject matter of study would include the full range of God, his Word, and the world. Thus, today, WCIU’s purpose is to prepare men and women to discover and address the roots of human problems around the world. Toward this end, we envision:

We are able to assist agencies in offering specialized graduate programs, helping them raise up leaders in areas where they are strong. We have worked with the former LAM (Latin America Mission, now part of UWM—United World Mission) to develop a transformational leadership/internship MA program, and with a Bible translation organization focused on the Muslim world to develop an MA program to train translation consultants. The Center for Health in Mission is currently working with us to develop an MA in global and wholistic health.

The knowledge gained and status conferred by academic degrees is essential for both Western and Majority World leaders who seek to be influential agents of culture change toward human flourishing, addressing problems and fighting evils through their vocations in all spheres of society. WCIU is addressing the asymmetrical balance of power in education between Majority World leaders and their Western counterparts in cross-cultural NGOs by offering affordable and portable graduate degrees in International Development that integrate biblical, historical, and cultural perspectives. These educational opportunities will empower influential, educated leaders to bring the next generation of leaders up to higher levels of education and influence without disrupting the ministry responsibilities of either the mentor or student.