A March 2017 Barna survey revealed disturbing evidence that validates our deep concerns about the Church’s Great Commission confusion: 51% of Christians in North America do not recognize or know of the Great Commission. More alarming, of the 49% who say they do (when given five Scriptures, one of which is the actual passage of Matt. 28) only 37% could actually identify it!

Would it be fair to say the graphs in this article expose a level of biblical illiteracy in our churches that is not only profoundly alarming, but unmasks how far we have wandered off the path of gospel-centered, disciple-making missions? Has the pendulum swung so far that today the hole in the gospel is the authentic message of the gospel?

Jesus told us in Matt. 28:18-20, which we know as the Great Commission, to make disciples of all the nations. Now don’t think nation states (like India or China), think people groups with distinct languages and cultures. The Great Commission according to Jesus is not just about doing good works in His name, it’s not even about making disciples BUT it’s about making disciples of all the nations. The priority then of our Great Commission task is not to just win as many people to Jesus as possible, it’s not simply to do acts of kindness and mercy in His name—it is to plant the gospel in every nation, tribe and tongue.

Missions has historically consisted of international or cross-cultural ministry for spiritual purposes. But today in many churches, missions has come to include outreach ministries that are within our own community and culture and are often social or economic in nature.

This broadening definition of missions has inevitably led to a philosophy that says that every follower of Christ is a missionary and every good, altruistic or evangelistic work done in Jesus’ name is missions. Though perhaps well intentioned, might calling everyone a missionary and everything missions have unintended and dangerous consequences? Can the mission of the church be anything we want it to be? Stephen Neill said, “If mission is everything, then mission is nothing. If everything that the Church does is to be classified as ‘mission,’ we shall have to find a term for the Church’s particular responsibility for ‘the heathen,’ those who have never yet heard the name of Christ.”

The West is quickly becoming post-Christian and the shift raises important questions about what it means to do domestic ministry. Europe and North America have become more and more like a mission field—but a post-Christian, rather than a pre-Christian, field. For many people today the term evangelism carries some baggage of Christendom’s days when the general biblical worldview was prevalent enough in society that street corner confrontations and stadium crusades found more traction and produced more genuine converts.  But times have changed, calling for a new missions-like engagement and evangelistic holism, thus the emergence of the term missional (somewhat in place of evangelistic). This fresh thinking is a good development, but with it comes a danger. “The danger is that with the discussion about being missional and every Christian being a missionary, the pursuit of all the peoples by prioritizing the unreached can be obscured…” David Matthis.1

So, does the Bible provide a clear definition for missions given the word isn’t even in the Bible? Can we expect the Bible to tell us what it means? Eckhard Schnabel is considered one of the world’s leading experts on missions in the New Testament and author of two 1000-page volumes on early Christian mission as well as the 500page work Paul the Missionary. He says decisively,

Missiologist Gary Corwin, in his article MissionS: Why the ‘S’ Is Still Important, compares these four terms and one more: “In addition, establishing churches among those people groups and communities where Christ is least known has been distinguished over the last several decades as what frontier missions is all about.3 Despite the overlapping meanings, says Corwin, each has an important, particular emphasis, and when they are properly understood each serves a useful purpose. The problem arises when the terms are used interchangeably and these unique emphases are lost: “To say, for example, that either the missio Dei and the mission of the church is synonymous, or that the mission of the church is all that one needs to focus on or be concerned about, runs the very real risk of simply defining everything as mission.”4

To cross the barriers that missions requires, we must bring significant focus and special emphasis in the Church to making disciples resulting in churches. Without this regular and specific emphasis on “making disciples of the nations,” the needs and outreach of the local church will always, quite naturally, receive the greatest attention of our efforts, while the voices of those with no access become a distant memory until next year’s “Missions Sunday.” 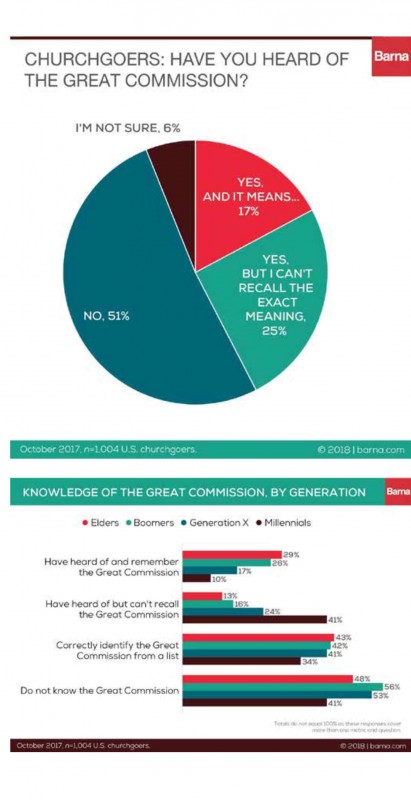 Is it Just Semantics?

Just how much confusion is there in the Church about the meaning of the Great Commission? Our combined experiences in working with hundreds of churches aligns with the evidence from the BARNA report and points to massive confusion—and not just among churchgoers and members but church and missions leaders as well. If you were to do a quick survey of church leaders and mission-minded, missions-active people in your church, asking them just a couple of basic questions about the Great Commission, we are convinced that you would get many different and often conflicting answers. Sometimes the differences would just be semantic, but in most cases they would be fundamental.

In our missions coaching and consulting work we repeatedly encounter serious confusion and stifling disagreement among church and missions leaders about the purpose and goal of the Great Commission. Following are some questions that we have asked and are continuing to ask:

Responses often reflect a seriously hazy understanding of the Great Commission. And if Christ’s followers are unable to state clearly and concisely their Great Commission purpose, we believe it will be nearly impossible for them to serve that purpose well.

A sound, biblical missions definition is crucial to the future of the evangelical Church. Defining missions in our relativistic, pluralistic era requires that we are committed to walk the path of God’s redemptive mission, culminating in the collective worship of the Lamb by all nations, peoples, tribes and tongues.

That is the bedrock path of missions to which we, His Bride, are called. No matter what process we use to define and carry out missions activity, this is the path our boots must travel if we hope to clear the fog of great confusion about missions and obey Jesus’ Great Commission imperative. 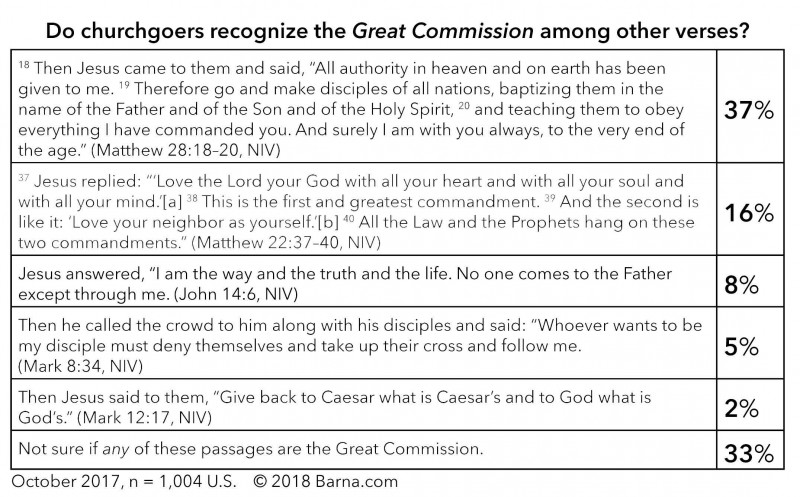 Matthew Ellison, President of Sixteen:Fifteen and Denny Spitters, Vice President of Church Partnership at Pioneers co-authored the book, When Everything Is Missions.  Visit http://www.wheneverythingismissions.com to learn more or purchase the book.