The Work of Missions

Very few people think that we are now in a war greater than World War II, and greater than any imaginable nuclear World War III. Or that Satan is a much worse enemy than Communism or militant Islam. Or that the conflict is not restricted to any one global theater, but is in every town and city in the world. Or that the casualties do not merely lose an arm or an eye or an earthly life, but lose everything, even their own soul and enter a hell of everlasting torment. (Rev 14:9-11) Until people believe this, they will not pray as they ought. They will not even know what prayer is.

In Ephesians 6:17-18 Paul makes the connection for us:

Take the helmet of salvation, and the sword of the Spirit, which is the word of God, praying at all times in the Spirit, with all prayer and supplication. To that end keep alert with all perseverance. (ESV)

Prayer is the communication by which the weapons of warfare are deployed according to the will of God. Prayer is for war.

Let me show you this more specifically from John 15:16-17: “You did not choose me, but I chose you and appointed you that you should go and bear fruit and that your fruit should abide, so that whatever you ask the Father in my name, he may give it to you.”(ESV)

The logic is crucial. Why is the Father going to give the disciples what they ask in Jesus’ name? Answer: Because they have been sent to bear fruit. The reason the Father gives the disciples the gift of prayer is because Jesus has given them a mission. In fact, the grammar of John 15:16 implies that the reason Jesus gives them their mission is so that they will be able to enjoy the power of prayer. “I send you to bear fruit so that whatever you ask the Father…he may give you.”

So I do not tire of saying to our church, “The number one reason why prayer malfunctions in the hands of a believer is that they try to turn a wartime walkie-talkie into a domestic intercom.”

Until you believe that life is war, you cannot know what prayer is for. Prayer is for the accomplishment of a wartime mission. It is as though the field commander (Jesus) called in the troops, gave them a crucial mission (“Go and bear fruit”), handed each of them a personal transmitter coded to the frequency of the general’s headquarters, and said, “Comrades, the general has a mission for you. He aims to see it accomplished. And to that end he has authorized me to give each of you personal access to him through these transmitters. If you stay true to his mission and seek his victory first, he will always be as close as your transmitter, to give tactical advice and to send in air cover when you or your comrades need it.”

But what have millions of Christians done? They have stopped believing that we are in a war. No urgency, no watching, no vigilance, no strategic planning. Just easy peacetime and prosperity. And what did they do with the walkie-talkie? They tried to rig it up as an intercom in their cushy houses and cabins and boats and cars—not to call in fire power for conflict with a mortal enemy, but to ask the maid to bring another pillow to the den.

Until we embrace the sovereignty of God, we cannot pray consistently that God would actually save lost sinners.

We can’t do what Paul does so passionately in Romans 10:1, “Brothers, my heart’s desire and prayer to God for them is that they might be saved.” (ESV)

Paul’s heart’s desire is for the salvation of his fellow Jews. When our hearts ache for something, we pray for it. And so he says that his prayer to God is that they be saved. He wants something accomplished in his mission—the salvation of Jews—as he preaches in the synagogues. So he prays to God that this would happen. He asks God to save them. “O God, that they might be saved! Do it God! Do what you need to do!”

Now my point is this: that kind of praying is inconsistent if you do not believe in the sovereignty of God. And what I mean by the sovereignty of God here is that he has the right and the power to save unbelieving, unrepentant, hardened sinners. Now there are a lot of people who do not believe God has that right. They do not believe that God has the right to intrude upon a person’s rebellion, and overcome it, and draw that person effectually to faith and salvation. They do not believe that God dare exert himself so powerfully in grace as to overcome all the resistance of a hardened sinner. Instead they believe that man himself has the sole right of final determination in the choices and affections of his heart toward God. Every person, they say, has the final self-determination in whether they will overcome the hardness of their hearts and come to Christ. And so it is finally in the hands of man, not God, who will be saved and how many will inhabit the Kingdom.

The effects on prayer for such people are devastating if they try to pray in a manner consistent with this rejection of the sovereignty of God.

They can’t ask God to actually save anybody.

They can’t pray, “Father, put your Spirit within them
and cause them to walk in your statutes.” (Eze 36:27)

The reason they can’t is that all these prayers give God a right that they have reserved for man—namely the ultimate, decisive determination of his destiny. If they ask God to do any of these things, He would be the one who actually saves.

How then do you pray, if you really believe that man and not God must make the ultimate decisions about salvation in the universe?

Here is another example of how this writer thinks we should pray for unbelievers: “Pray that God will plant in the hearts of these people… an inner unrest, together with a longing to know the ‘Truth.’” Now my question is, if it is legitimate for God to “plant a longing” in a person’s heart, how strong can the longing be that God chooses to plant?

There are two kinds of longings God could plant in an unbeliever’s heart. One is so strong that it leads the person to pursue and embrace Christ. The other is not strong enough to lead a person to embrace Christ. Which do you pray for? If you pray for the strong longing, then you are praying that the Lord work effectually and get that person saved. If you pray for the weak longing, then you are praying for an ineffectual longing that leaves the person in sin (but preserves his self-determination).

Paul leaves no doubt where he stands on that issue in Romans 9:16, “It depends not upon man’s will or exertion, but upon God’s mercy.” So he prays that God would convert Israel! He prays for her salvation! He does not pray for ineffectual influences, but for effectual influences. And that is how we should pray, too.

We should take the new covenant promises of God and plead with God to bring them to pass in our children and our neighbors and on all the mission fields of the world.

The Place of Prayer in God’s Purpose for the World

The role of prayer is so unspeakably significant in God’s design that we are prone to overstate its role, especially in relation to the Word of God and the preaching of the gospel. So let me say, loud and clear, that I believe the proclamation of the gospel in word and deed is the work of missions. And prayer is the power that wields the weapon of the Word, and the Word is the weapon by which the nations will be brought to faith and obedience. 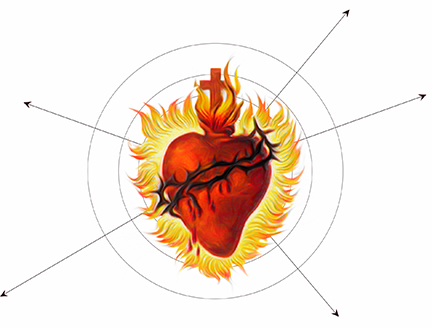 Not only has God made the accomplishment of his global purposes of salvation hang on the preaching of the Word, he has also made the success of the preaching of the Word hang on prayer. God’s goal to be glorified in a world full of white-hot worshippers from every people and tongue and tribe and nation will not succeed without the powerful proclamation of the gospel by people like you and me. And that gospel will not be proclaimed in power to all the nations without the persevering, earnest, global, faith-filled prayers of God’s people. This is the awesome place of prayer in the purposes of God for the world. They won’t happen without prayer.

How do we know this?

We know it by the way the apostle Paul and the Lord Jesus make prayer the servant and power of the ministry of the Word.

Pray also for me, that utterance may be given me in opening my mouth boldly to proclaim the mystery of
the gospel. (ESV)

Pray for us also, that God may open to us a door for the Word, to declare the mystery of Christ. (ESV)

Finally, brethren, pray for us, that the word of the Lord may run and be glorified. (ESV)

This is the meaning of the amazing Word of the Lord in Matthew 9:38: “Pray therefore the Lord of the harvest to send out laborers into his harvest.” (ESV) Reinforcements come into the missionary enterprise when the churches know they are in a war, and when they bow down in their trenches with bullets flying overhead and get on their walkie-talkies and cry out for more troops. This is the place of prayer—on the battlefield of the world. It is a wartime walkie-talkie, not a domestic intercom to increase the comforts of the saints.

This article was edited and used with permission from Desiring God Ministries. For the full article, please go to http://www.desiringgod.org/conference-messages/prayer-the-work-of-missions<./p>

Great to see this excellent teaching on prayer. It was first delivered to a national ACMC missions conference in 1988 and at the time it was the most requested audio tape in ACMC’s history.

John Piper is founder and teacher of desiringGod.org and chancellor of Bethlehem College & Seminary, Minneapolis. For 33 years, he served as pastor of Bethlehem Baptist Church, and is author of more than 50 books. His sermons, articles, blog posts, and books are available free of charge at http://www.desiringGod.org