The Rise & Fall of Movements

The Council of Nicaea in AD 325 was the first worldwide gathering of Christian leaders. They represented the churches of North Africa, Europe, and the East as far as Persia.

The Emperor Constantine, robed in purple and adorned with jewels, entered and sat down on a chair of gold. Two hundred and fifty Christian leaders rose to their feet. As he looked out on the bishops he had assembled, Constantine saw empty eye sockets and mutilated limbs, grotesque reminders of the past. These men had been tortured by the empire he now represented. But after three centuries, Rome’s fury was spent. Persecution had failed to crush the movement that began with Jesus.

This missionary movement—founded by a crucified criminal in an insignificant province—was everywhere. In an empire of sixty million people, one in ten called Jesus of Nazareth “Lord.” Christianity was the most tight-knit and widespread organization in the most powerful empire on earth.

Constantine’s conversion was a mixed blessing for the Christian movement. According to Rodney Stark, imperial favor transformed the church into an elite organization, lavishly funded by the state bestowing wealth and power on the clergy.

The church lost interest in evangelizing the barbarians beyond the borders of civilization. Within the empire, coercion replaced persuasion as the method of evangelism. Now the church grew dramatically because of its favored position in society. By the end of the fourth century, the vast majority of people within the empire identified as Christian.

Meanwhile in the remote desert caves of Egypt the monastic movement was on the rise.

Here is the pattern of church history. Movements are born (Birth), and those that survive infancy become growing adolescents (Growth). They reach adulthood and survey their achievements. They become complacent and settle down (Maturity). Some find the will to return to their youthful zeal (Rebirth). Most play it safe (Decline). Declining institutions can linger for generations, slowly unravelling (Decay). Meanwhile, always on the fringe, new movements are emerging. 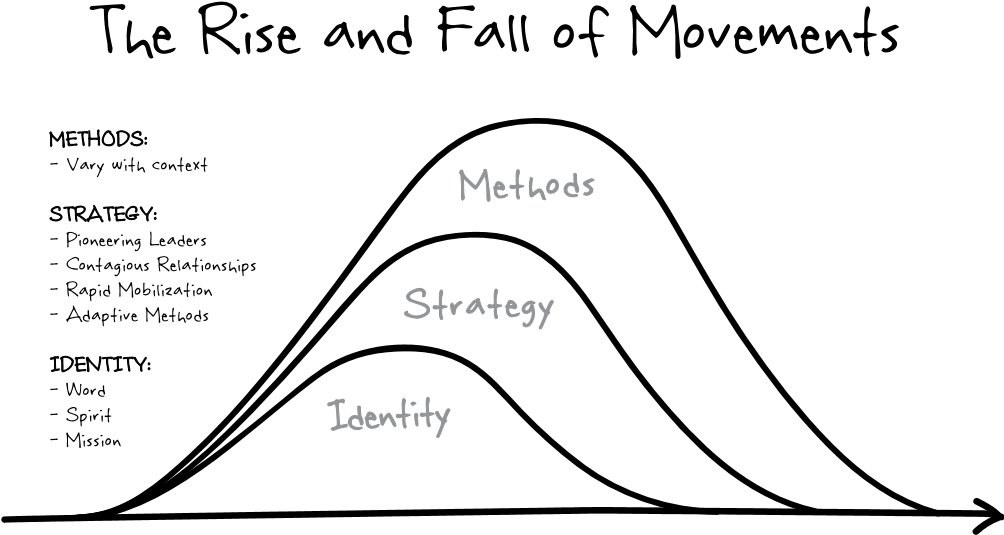 A missionary movement became a state religion at peace with the world.

When I was first drawn to the study of movements, I watched what they did, I discovered characteristics, and I observed Strategies and Methods. Years later I realized I was missing the most important thing: beneath the surface of observable activity is the why—Identity.

Two connected stories stand between Jesus’ life in Nazareth and his Mission as coming King — his baptism and wilderness testing. They reveal how Jesus lived and ministered out of his Identity as the muchloved Son—obedient to his Father’s Word, dependent on the Holy Spirit, pursuing his Mission.  When Jesus walked out of the wilderness and returned to Galilee in the power of the Spirit, he knew who he was, and he knew what he had come to do. Movements rise and fall to the degree to which they move toward and away from the life and ministry of Jesus.

Jesus returned to Galilee in the power of the Spirit to launch a missionary movement. He expressed his Identity in strategic action. Strategy is how a movement operates. Strategy applies principles in pursuit of the mission. Jesus’ strategy had four recurring aspects:

Strategy must be grounded in Identity—our how must serve our why. It is possible to miss the importance of Identity (Word, Spirit, Mission) and view Strategy as the determining factor in movements. We apply the principles to get the results. We build the Tower of Babel to reach the heavens. But God has a way of tearing down our constructions and confusing our efforts to bring us back to the question of Identity.

Strategy is a movement’s overarching how. Methods are what we do. Methods apply Strategy and they vary according to the context. They are the specific tools, systems, and processes we use to implement Strategy.

Every generation of disciples must return to be with Christ in his baptism and desert ordeal. Recall the disciples as Jesus found them after he had risen: they were done; the movement was over; its terrified leaders locked themselves in a room and shut out the world (John 20:19). The Jesus movement had risen and fallen within just a few years.

What did Jesus do? He brought them back to their Identity. He opened up the Scriptures to them and taught them from the Word of God (Luke 24:27, 45). He prepared them for the coming of the Holy Spirit in power (Acts 1:4–5). He explained their Mission, instructing them to go to the nations with the gospel of the forgiveness of sins, baptizing and teaching disciples to obey his commands, and forming them into churches. They were not to stop until he returns in glory (Matthew 28:16–20; Luke 24:45–49; Acts 1:1–8). The movement was reborn by a return to its Identity. Now it was ready for action.

For as long as you live and serve the Lord, you must never tire of returning to your Identity—the Word, the Spirit, the Mission. Jesus began the movement and He still leads the way.

Steve Addison is a catalyst for movements that multiply disciples and churches, everywhere. He is an author, speaker, podcaster and mentor to movement pioneers. This article is an edited extract from his new book, The Rise and Fall of Movements: A Roadmap for Leaders. Visit Steve at movements.net.