The Current State of America

There are two sides to every story.  Life eventually teaches all of us that.  It is with this perspective that I want to pull back the curtain and take a look into the state of Christianity in America. As some have already looked into the state of the Church in America, they may have already abandoned all hope and are just waiting for Christ's return with the few believers they see around them. Still, others may see a more hopeful picture of revival, renewal, and reformation.

It is no secret that the number of Christians in America is declining.  In 1990, 86% of Americans identified themselves as Christians. By 2014 that number dropped to 70.6%.   However, this is the number of “self-identifying Christians” and tells us nothing of the true picture of people who are actually followers of Jesus. Those who regularly attend some kind of religious service is also now down to less than 20%...but remember, this stat is for all religious services. [1] 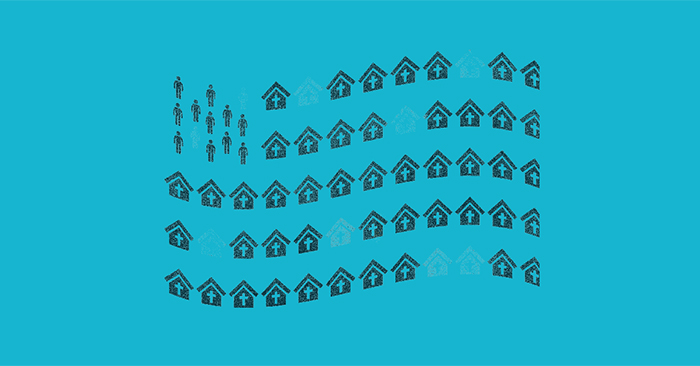 Recent research states that there are now 195 million non-churched people in America, making America one of the top four largest “unchurched” geopolitical nations in the world. In fact, there are approximately 360 unreached people groups living within America.

About 23% of the US population are “nones,” up from 16% in 2007. “Nones” are people who don’t believe in anything in particular. Many of them were even at one point attenders of church, or at least born into a nominal Christian family.[2]

During the last ten years, membership of all Protestant denominations declined by 9.5%, while the national population increased by 11.4%.  Also, in spite of the rise of “mega-churches,” no county in America has a greater church population than it did ten years ago. This is probably because much of the growth in larger churches is from transfer growth, as less than 2% of Christians share their faith and 96% of church growth is from transfer growth or kids being born into the church.[3]

Obviously, Christianity is not even close to keeping up with the population growth of America. What was once a Christian nation with a Christian culture has now become an unchurched nation. For the most part, many people, especially young people, view church as boring and irrelevant to their lives. One of the reasons for this is that as Western Christians and our fascination with learning, we have focused too much on knowledge. Most Christians unfortunately look at Christianity as a set of doctrinal beliefs and things to know about, rather than as a lifestyle of following Christ and obeying his commands.

There is, however, a brighter picture to this story, another side of the coin as one might say.  While people are leaving the church in droves, many of them are people who “self-identify” as Christians yet don’t really have a relationship with God through Jesus Christ.  They are the “cultural Christians” or the “nominal Christians.”

If one were to look at the state of Evangelicals in the US, the picture is not as dim.  Over the past seven years, evangelicals have lost less than 1 percent of their share of the population, holding steady at about 1 in 4 American adults (25.4% in 2014, vs. 26.3% in 2007) and preserving their status as the nation’s largest religious group. Evangelicals now also make up 55% of the nation’s protestant church members.[4]

Another alarming statistic is that around 3,500 to 4,000 churches are closing their doors every year. However, according to estimates from a Nashville-based research organization with input from 34 denominational statisticians, more than 4,000 new churches opened their doors in 2014, outpacing the 3,700 that closed.[5]  While older, stale denominations have lost touch with the younger generations, all is not lost. Churches are being started, and in 2014, the net total of churches was actually greater than the year before!

This also says nothing of the millions of Americans who are starting smaller churches and making disciples in their homes or offices. According to the American pollster George Barna, as many as 30,000 house churches were established as of 2009, and it is estimated 6-12 million Americans attend them.[6]  Some house church networks (or simple churches) are seeing multiplication of their churches at an exponential rate.  So this stat in 2009 could be largely out of date and much higher now in the year 2016. Many of these people might also not be counted in denominational polls.

So, while nominal Christians are dropping off and the rise of the “nones” is getting larger, there is still so much hope!  There is a large group of committed Christians in our country still. Their numbers are not falling drastically, and in fact, could be growing at a much faster pace than we think!  These committed followers of Jesus view being a Christian as a lifestyle of following Jesus and obeying His commands out of love for Him.  The challenge is that, as humans, we can’t measure this statistic.  Only God knows who truly belongs to him and who doesn’t. As we look at the big picture of church growth in America, God is on the move and is drawing people to Himself—maybe just not in the conventional ways we are used to or trying to see him in.

God is working, much of it in spite of deep corruption in the household of faith. He delights in giving eternal rewards to his people for serving him in obedience. However much of what his people do will be burned up as wood, hay and stubble. Believers are “serving” in disobedience. They think it’s all obedience because of the traditions of men that are justified with twisted or mistranslated scripture. Bible experts can see it’s not translated properly but they prefer it the way it is to support the status quo that gets them a full pay check in exchange for ” leadership”.

1. Believers will consume 84% of their giving to provide primarily a special facility and at least one hired Bible expert. Only 16% of the “giving” will go out the door beyond the “givers”. That is from Leadership Journal’s article on normal church budgeting. I have the chart that shows this. This chart pushed me to ask God - Is there a way for me to practice all of church life like you asked for it and devote 100% of my giving to go beyond myself? God answered with many scriptures, most of which teach specifically that spiritual leadership should always be combined with marketplace ministry. I looked at the 3 texts that are used to justify the opposite of this. I found them all twisted in multiple ways. All it takes for a layman to see it is a free app called “Blue Letter Bible”.

2. Professional “leaders” will never reproduce themselves in the local church inspire of Luke 6:40 and 2Tim. 2:1,2. They are perpetual dependency institution custodians. If a man does not accomplish the goal of teaching you can’t call him a teacher. God will teach in spite of him but that is no credit to what he does. I don’t say this to be mean. It’s what they are doing that contradicts scripture they all know. So the EXAMPLE of the alleged leaders is non-reproductive. So all the “non-leaders” have no problem following their example.

3. Jesus prayed that his people would display perfect oneness to the world to show that He and the Father are one. The world can clearly see God’s people are fractured and divided into 1000 or more different brand names. Institutional branding is on the front burning. Jesus is on the back burner. It is amazing anyone is saved. A large percentage of churches are set up to get unbelievers in the door BEFORE they will hear about Jesus.

In spite of these deeply held practices, there is a ministry where believers come together from many different brands, fully prepared to speak truth to each other and no leaders get paid. It’s called Bible Study Fellowship. It’s all over the world. I have been in this for about a year and half and I can’t say if any of the leaders even know they are functioning without these 3 false dependencies.

Who is willing to interact about these issues? If I’m wrong, I’m open to correction.
We serve a powerful God who wants to work through courageous and obedient people.

Nathan is a discipleship trainer with Biglife and also helps to oversee the trainings and training material. He lived in China for six years, with a focus on reaching unreached people groups. He currently lives in FL with his wife, Beth and their two young children, Jonathan and Joy.

.(JavaScript must be enabled to view this email address)
http://www.big.life | www.zumeproject.com