Making Room for Music and Dance

“Consider this, you who ride on fine donkeys, You who sit on fancy saddle blankets, And you who walk along the road. Listen to the village musicians gathered on the watering holes.They recount the righteous victories of the Lord And the victories of his villagers in Israel. Then the people of the Lord marched down to the city gates.” “Wake up, Deborah, wake up! Wake up, wake up, and sing a song!”

As Deborah burst forth in a song of praise after Israel’s miraculous deliverance from the hands of their enemy, so we find indigenous peoples today seeking similar ways to express themselves to the Creator through music and song and holistic bodily expression. In many churches of tribal background, the impulse for spontaneous oral expression in song and poetry is latent in the community. No one is expected to be an expert and everyone is expected to contribute. The pressure of having to be a gifted singer or artist is not the crucial element; rather, worship is the focus and not the individual.

Connecting at a Heart Level 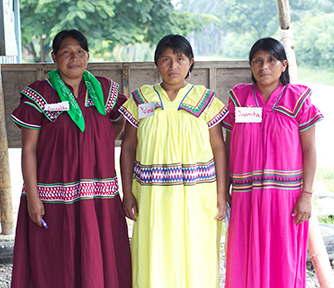 It was at a rural church where Simon and Juanita came to hear about Bible storytelling for the first time. Their friend and Ngobe evangelist, Eliodoro, had invited the couple to participate in a weeklong seminario (seminar) at Iglesia Misionera Restauración de Almas in Laurel, Costa Rica. Spanish would be the language in which my colleague, Regina Manley, and I would be teaching Bible stories while allowing the heart language, Ngabare, to be used among the indigenous men and women during the seminar. Although a year earlier we had trained them in some basic Bible storytelling skills, Pastor Carlos Espinoza had asked us back in order to include others in the church community who had not previously attended.

Like many other Ngobes, reading and writing in Spanish or Ngabare posed a challenge to both Simon and Juanita. As a result, we used oral methods of communication during the five days of instruction.  The couple listened and paid close attention to the stories and small group discussions but when I invited them to participate, they smiled and declined the invitation. Their shy disposition told me it would be better to give them space and time to process all the things they were learning. 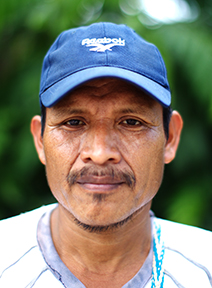 On the fifth and final morning, an unusual turn of events began to take shape.  Simon, sporting his bright fuchsia Chacara bag, and Juanita, wearing her beautiful native dress composed of richly colored hues, were waiting for Regina and me when we arrived early at the church. With a big grin on his face, Simon approached me and said how much he and his wife had loved listening to the Bible stories during the seminar. “I have never attended anything like this. It’s been different but it’s also been good. The Bible stories have gripped our hearts and we want to know if we can sing a song unto the Lord for all the things he has done for his people,” commented Simon on that sunny April morning.

As usual for that week, we prayed for everyone in attendance and asked the Holy Spirit to dwell in our midst.  Simon and Juanita then got up from the wooden pew and walked over to the front of the church where they confessed they had never held a microphone, let alone spoken in public. Simon effortlessly took out a handkerchief from his back pocket, and Juanita, who had previously not said a single word during the week, began singing a most powerful song as if she had prepared for this moment all her life.

And this was Juanita’s song:

And I feel his presence
I feel it in my hands, feet, and soul and all over me 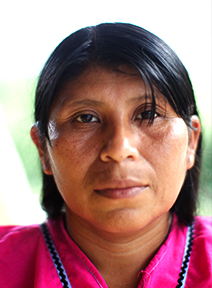 While the indigenous men and women clapped during Juanita’s song, Simon wept, swayed and danced as his wife sang a cappella to the Lord. When she finished, he uttered, “We don’t deserve you, Lord; we don’t deserve the miracles you do for your people.”  Their worshipful praise song was a response from their hearts. It reminded me of the Song of Deborah as well as the Psalms of King David.  After all, the people of Israel were also a tribal, communal people who responded with their whole beings to God together with their people.

Afterward the couple quietly sat down. The presence of the Holy Spirit had indeed filled the small church. The soft-spoken, gentle couple that at first appeared timid and reserved had blessed everyone in attendance that morning. Watching Simon and Juanita connect with God through music and dance expanded my understanding that storytelling is only one form of expression and communication.  By making room for music and dance, Simon and Juanita pointed others back to God.  They were stirred to join in with the “village musicians gathering at the watering holes” (Jud. 5:11) like the Israelites in Deborah’s day.

Having witnessed how the Ngobes demonstrated a passion for God and His Word through this one small form of music and dance means that I’ve only begun to understand the vast range of oral and physical expression rising to the heart of the Father from remote and rural places.

Glory to God for people like Deborah and Juanita who lift their hearts and voices in hymns of testimony and praise to our King.

Sing to the Lord a new song.

Great article Laura! Music is such an important part of our worship and understanding of God’s Word and God Himself!  For me a song can instantly remind me of the power of God and how despite my circumstances He will keep me and use me to help build His Kingdom!  God Bless you and Tony!

Laura was born in Cuba, grew up in Spain and spent 35 years in the United States before moving overseas with her family to serve as an Orality Specialist in Latin America with Mission Aviation Fellowship (MAF). Laura and her husband Tony have three children and currently live in Costa Rica. Laura can be reached at .(JavaScript must be enabled to view this email address)