Fulfilling our Legacy to Reach the Unreached

In 1976 the U.S. Center for World Mission was born. Ralph and Roberta Winter felt compelled by God to step out from the secure and stable environment of a tenured academic position to focus on “waving the flag” for the Unreached Peoples. Just two years before, in the summer of 1974, Ralph had given a plenary address at the Lausanne Congress. The Winters were’t sure at the time if anyone really grasped what they were trying to say. Perhaps more importantly, God was calling them to do something about these people groups which were “hidden” from the view of Christians around the world.

With little money and no donor base, they stepped out in faith to begin the USCWM and to purchase an old college campus in Pasadena. It took twelve years of struggle and hard work to pay off the campus.

While solid, encouraging progress has been made among the unreached, the body of Christ is not yet established in all peoples—as outlined in the Bible from Genesis 12 to Matthew 29 to Revelation 5 and 7.

When Dr. Winter chose Dave Datema to replace him as General Director—just days before his death in May of 2009—he wrote to the staff about the future, "I am immensely proud of our people. I believe our fellowship is stronger than ever and will continue to grow stronger, and that its best days are beyond my lifespan—if you are willing to work as a team, rather than a clutch of terrific individuals."

Our entire leadership—now led by Chong Kim, Dave Datema and Bruce Graham, who form the Office of the General Director—is passionate to continue the legacy of the vision, especially to pass that vision on to coming generations. To do this, we believe it is time for a fresh way to communicate that core idea imbedded in God’s word: the establishment of Christ’s church among all peoples.

The frontier mission enterprise is now global. We have learned a lot about our world, including where God is working and how he is bringing peoples to himself. Workers are being sent out from people groups that were untouched when we started in 1976. They are reaching still new unreached groups.

And yet still we are watching…praying…working to extend the gospel to the places where—as best we know—there is not a viable, indigenous fellowship of believers. That still includes whole sections of India, parts of Asia, North Africa and the Middle East, with total populations numbering over two billion!

We wait on the Lord; but that’s not passive. With the core vision comes the need to articulate it in ways that make it clear what is left to be done in a way that impacts the generation of servants who will follow us.

We have chosen Frontier Ventures as our new identity. Because there are unreached groups still untouched by the gospel, our central vision remains the same and the word Frontier remains foundational in our 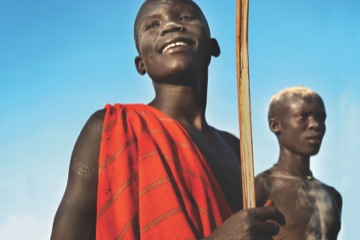 new name—or any name we might have chosen. Many do not realize that since 1990, our legal name has included the word Frontier: Frontier Mission Fellowship. It was chosen to reflect not only the idea of frontiers yet to be reached but also that of a community focused on that task. That remains our unwavering focus. It is what drives us to get up each day to pursue God’s kingdom advance.

The word Ventures speaks of the need to strategize and plan for serious outreach into places where the gospel has not yet taken root. This is not a day hike. It is an enterprise that is pointed toward an undertaking to bring the light of the gospel to the least reached. Serious stakes await us in frontier mission service. Global servants in organizations we work with all around the world have seen lives sacrificed for gospel advance. It is not a simple task.

Ventures also speaks of taking on something under God’s direction, will and purposes—it is his undertaking. It is something that ultimately, cannot fail—though at times pioneers do not see fruit in their lifetimes or their lives are cut short in pursuit of a people for his name. This task demands resolve and determination.

We take this very seriously. It requires preparation, on-going growth both spiritually and practically—from those who’ve gone before us and those who are engaged in the task now. As John Piper put it,

Nothing…nothing can be more important than what the Son of God died to achieve.…reaching all the peoples of the world with the saving news of Christ’s death and resurrection so that God worshipping, Christ exalting, Bible honoring, people evangelizing, mission advancing, justice pursuing, society changing, growing communities of believers can be established through faith in the Redeemer that the greatest works of the church that can possibly be in this age.

Having worked here since 1982, including 27 years with Ralph Winter, I, and others with me, feel a strong sense that we are stewards of his legacy. As a result, we considered how to further Ralph’s exceptional insights on the task and how it could be better understood and acted upon. We are also looking for those who are currently speaking into issues of kingdom advance.

By 2013 we had established the Ralph D. Winter Research Center, which seeks to be biblically grounded, strategically focused, and globally engaged. The RDW Research Center’s purpose is to Advance strategic collaboration and effective networking of mission leaders, thinkers, scholars and activists into the future. This is being accomplished through:

Information and insights from these have been published with specific lives impacted and ministries enhanced—for which we are thankful to God. A new website is being developed that will enable access to some of the best of Winter’s writings—much of which has never been published. By the time you read this you will be able to access the site at ralphdwinter.org.

Please consider joining us here in Pasadena at the Venture Center for the Lectureship and WCIU’s next graduation from May 14-16, 2015.

In the early days of our ministry, the Winters worked hard at getting key leaders to endorse the work. One day in 1978, less than 2 years into the work here, Ralph and Roberta interviewed Bob (Robert) Pierce, Founder of World Vision and Samaritans Purse. He was frail and could only climb three steps outside of our library on campus. There he recounted his life:

I came to this campus…as a teenager…I came to start high school here, my father had died, my mother was an invalid, this was my first home away from home. I was just 13. Now the years have passed, my life is spent…. Nothing would please me more than that every inch of this campus should be devoted to all men from all over the world especially this great unreached part…where there’s only a grain of mustard seed…[we must get out the gospel] in the little time we have left before Jesus comes.

Then he turned to Ralph and Roberta and said, "Ralph you have not only my prayers, as I live and breathe you have my dying prayers and I promise from the battlements of heaven I’ll be cheering and praying and interceding and reminding the Lord and if there is any way I can I’ll be prodding the conscience of every Christian to see that we will have done everything we wish we had done before we meet Jesus face-to-face."

Four days later he was in the presence of the Lord.

Hebrews speaks of our need for endurance (10:36) saying, “But we are not of those who shrink back and are destroyed but of those who have faith and preserve their souls.” (10:39) He then moves to recount an amazing array of faithful servants who sought to follow God—often in great difficulty and imperfection. Chapter 12 calls these a “cloud of witnesses” that we have surrounding us!

I believe we can also look to those who have gone before us—people we knew of or have been impacted by. People like Bob Pierce, Ralph and Roberta and a host of others in recent years. The Winters led the way for us 40 years ago. We look forward to the next 40 years.

As we look to the future we long for that day when we too will meet Jesus face-to-face. I encourage you, like Bob Pierce, to commit to pray and engage even more in this frontier venture. Could it be that God is calling you to serve with us in some way—from your home or in Pasadena? God continues to use people with all kinds of different skills. Please let us know if you are interested in discussing how you might serve in this work.

I found the choice of the new name/brand very interesting and I love it.  According to the Webster dictionary, Venture is an undertaking involving chance, risk, or danger; especially :  a speculative business enterprise.  I believe the non-religious domains or spheres of influence will play a critical role in the completion of the task to disciple the nations.  The traditional missionary enterprise and thinking must make room for more creative endeavors (ventures!) that perhaps go beyond current thinking on BAM or tentmaking.  the trailblazing student volunteers around the turn of the 20th century built schools and hospitals.  Will the next generation of student volunteers build startups and studios?  History showed us how SVM mobilized 20,000 to go over a 30 year period.  How should we think about mobilizing, equipping and sending 200,000 in the next wave?  We definitely need innovative thinking and models.  We definitely need to take more risks and partner with organizations we’ve never partnered before.  We need to hear from younger and more entrepreneurial voices in the community.

Thanks David,
I agree…in fact part of the reason we changed the name was b/c of the next generation.
Send some our way!