Creative Collaboration for the Unreached

One of the specific ways Frontier Ventures is seeking to catalyze breakthrough is by creating a collaborative environment that encourages creativity in several key areas of mission activity—in prayer, research and strategy, innovation, media, mobilization, training and education. This campus, originally purchased for the U.S. Center for World Mission, is now known as the Venture Center and its purpose is being made more explicit for a new generation and a new era. It’s a place for diverse partners to come together around the common goal of breakthroughs among the unreached, believing that we are truly better together.

The Venture Center is a 17-acre campus located in sunny Pasadena, CA, at the foot of the San Gabriel Mountains. The campus is 15 minutes from downtown Los Angeles and within an hour of hundreds of 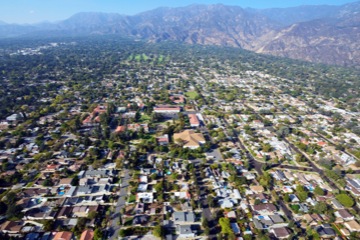 unreached people groups dispersed throughout the greater LA metro area. Its location makes it an ideal place for addressing issues related to the unreached peoples of the world and the diaspora populations (see article on page 45).

The campus itself is home to many different groups including churches, mission agencies, organizations and schools. In the past couple years the Pasadena International House of Prayer, the Call, Epicentre (a mission-minded church), and YWAM Fire & Fragrance (a branch of YWAM focused on prayer and outreach) have all been brought into the mix. (You can read about several of these groups in our July/August 2014 issue on prayer movements.) The drive to get more groups like these is part of the strategy to focus on reaching out to the next generation of young people whose hearts beat for the nations. “We wanted to bring together like-minded people, with common vision but diverse backgrounds and expertise, into a space where insightful collaboration can happen,” says Bruce Graham, one of the General Directors of Frontier Ventures, “We really feel like this is a time where God is doing something new, bringing convergence between different streams of the body of Christ, for the sake of the nations.”

Becoming a Space Dedicated to the Unreached

Though the name Venture Center is new, the campus is not. It has been a “consecrated space” since the early 20th century when the Nazarenes purchased it to be a gathering place and eventually a Bible college. They built the historic Mott Auditorium despite the scarcity of steel and other building materials brought on by war efforts of World War II. It hosted revival meetings that would build faith, transform lives and ultimately impact the nations. By the 1970s the Nazarenes were seeking to relocate and sell their Pasadena campus.

Mission SOS Director, Erik Stadell, a Swede who was living close by the campus while he studied at Fuller Theological Seminary, noticed that the campus was for sale and became curious to know what God intended for the campus. Drawn to the prayer chapel at the center of the campus, he was gripped by an intense burden to pray and fast for an answer. After a week, he was convinced he’d received that answer: the campus was to be consecrated as a center for world mission.

In 1976, with little money or backing, Ralph Winter stepped out from his faculty position at Fuller to purchase the campus—putting in a bid against a cult with a lot more money—in order to launch this center for world mission. Winter had a vision to use this campus to awaken one million evangelicals to the cause of the unreached. The Nazarenes desperately needed the money for the campus, but they felt sympathetic to this cause and desired to see the campus remain in the hands of those who would use it for kingdom purposes. They agreed to sell to Ralph and Roberta Winter, and the U.S. Center for World Mission was born.

The purchase in itself was a saga stretching over twelve years and involving many young people who came and sacrificially joined the Winters and their work in Pasadena, Thousands of believers from across denominations and traditions contributed small $15 gifts to help the nascent U.S. Center make its monthly payments—which were often made miraculously, just in the nick of time. Despite the challenges that came from purchasing the campus with few resources, Winter said he never felt more convinced that God was in it.

During the decades that followed, many mission agencies retooled to add an unreached peoples focus to their ministry, while other entirely new groups sprang up to focus exclusively on the unreached. Numerous agencies have called the campus home and others, like Create International, GMI and Frontiers, were founded in the visionary and collaborative atmosphere of the campus. Nearly 40 years have passed since the founding of the U.S. Center for World Mission, and by God’s grace outreach to the unreached has greatly multiplied.

This place, now called the Venture Center, continues in that tradition. Its name conveys the purpose and spirit of its heritage, as well as its future—that it would be a place dedicated to the launching of new ventures for the kingdom. The idea of “venturing” with God is a big one for Frontier Ventures and is a staple of its mission. “We believe that to see breakthroughs happen, we must be willing to venture beyond the boundaries of the familiar and known,” says Dave Datema, one of the General Directors of Frontier Ventures. “We must be willing to trust the Holy Spirit’s guidance and to employ all the creativity and critical thinking he has given us—for the purpose of reaching the unreached. Winter was fond of saying, ‘More of the same will not get the job done.’ At its heart, that’s what the Venture Center is about.”

The Venture Center plans on supporting collaboration in seven critical areas of mission: prayer, research, innovation, media/publishing, mobilization, training and education, and strategy. These areas are key to the acceleration of breakthroughs in today’s fast-paced, globalized and connected world. Because these seven “hubs” are in such close proximity to one another on the campus, they are a place where collaboration 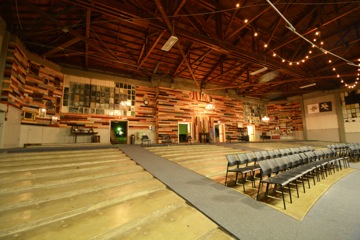 escapes its usual bounds within a single field of study or practice and cross-pollination can now occur. The hope, for instance, is to see media, prayer and innovation come together to create an app to link people together in intercession for specific unreached people groups, or for trainers and innovators to work together to develop better models of training for the field and better ways for non-field workers to contribute meaningfully and fruitfully to field efforts.

To facilitate the innovative aspects of the vision, Frontier Ventures is establishing a space dedicated to such activities. Dubbed the Ralph D. Winter Launch Lab, it honors the founder’s legacy of innovation. The lab will seek to bring the kind of creative and critical thinking focus to mission strategy, financial limitations within the support-raising model, mobilization challenges, and other tough problems in mission that need creative solutions. It’s designed to be a place that will benefit all the ministries on campus and stimulate new ideas among the Venture Center campus collaborators and even out into the broader mission world.

From the people perspective, the Venture Center is a community. It’s believed that much of the impact of the Venture Center will come through organic interaction and “un-programmed” activity—that “chance” connections can be as significant as those that are planned. Creating an atmosphere where those of like mind and heart can gather and encourage one another day in and day out is as important as the projects and activities they produce. “We really see the campus as the physical expression of a spiritual community,” says Chong Kim, General Director overseeing the Venture Center’s strategic development, “We believe that collaboration comes out of this kind of atmosphere of prayer, worship, creativity and skill. God called and anointed workmen to build his tabernacle and we believe this is a similar endeavor. We are convinced that it is God’s heart to have the generations working and doing life alongside one another. That’s really what we’re trying to build. It’s about people, and it’s about building a place that supports that kind of community—from the use of buildings to the look and feel of outdoor spaces and common rooms for brainstorming and creativity. At the end of the day, it’s about seeking God’s heart and catalyzing kingdom breakthroughs among the unreached.”

Can you please send me the latest list of “Priority People Groups”?

Namely, those which have:
a) no known believers
b) no scripture in their language
c) no known missionary working among them

The only one I could get so far was from Mission Frontiers January-February 2007 article titled “Which People Need Priority Attention” and the “Visual Comparison of “Priority Peoples” Lists” on the last page of the article.

I hope you can answer me soon, as I am preparing a report on this and I need the info or a link to the info. asap.

Neil- you can get this information by visiting the Finishing the Task list here: http://www.finishingthetask.com/uupgs.php?sort=Country