Let’s start here: Ethne really isn’t like any other network or conference out there—at least, none I’m familiar with.

I’ve been to a number of mission conferences. Some have been huge, and some have been very small. Some have been intensely scripted—so much so that if you just walked through the script it was like being on a mini-vacation in a nice hotel. Some have been very loose, so that you could hardly recognize the outcome. Many were very academic—papers presented, discussions held over lunch, maybe some fireworks if some controversial position was taken, but mostly very thoughtful and theoretical.

Ethne’s not like that at all. One of the attendees perhaps described it best when he said Ethne is like a family meeting where news of what’s happening is shared over a meal.

Briefly, Ethne is a network for people passionate about reaching unreached peoples. It grew out of the meetings held after the end of the AD 2000 & Beyond Movement, when such people found there was still a need for a global network focused on unreached peoples. (At one of the Lausanne meetings, for example, those interested in unreached peoples and those interested in ministry among the handicapped and disabled were all folded into one track called “hidden and forgotten people.” We amicably but quickly split into tracks 12A and 12B.)

As Ethne formed and grew, it intentionally kept its form as a decentralized and relationally-based “swarmish” network. There is no central Ethne headquarters, no incorporated body, not even a bank account (which makes registration for conferences interesting). It is a true “network of networks,” representing the sum of all the regional unreached networks (such as COMIBAM, MANI, IMA, the Korean World Mission Association/KWMA, SEALINK, PMA and many others). Every three years Ethne holds a conference in some region of the world. The exact place rotates: the first was Bali 2006 hosted by SEALINK, the second Bogota 2009 hosted by COMIBAM and the third and most recent was Seoul 2012 hosted by KWMA. These conferences typically bring together about 400 field leaders and practitioners.

The conference is “by invitation only,” but if you are working among unreached peoples and connected to someone else, it is really not hard to get invitations (issued relationally through the networks). The big constraining factor is typically the size of the venue and the quota: one of Ethne’s values is that it proportionally represents the various regions. Western faces are very much a minority—in the conference as a whole, and certainly on the stage. Even the name Ethne was chosen because it’s Greek, not English, and needs less translation.

An Ethne conference focuses on 1) celebrating Great Commission progress among unreached peoples; 2) assessing current opportunities and resources; and 3) accelerating movements to Christ among all peoples. These events always have their interesting moments. As with any family, you will encounter a cousin or two who can spin a great story—and then, on follow-up, you find the story has been, shall we say, filled with a bit of hot air. But elder brothers and sisters keep us on track and focused. There are those who come unsure about the whole idea of unreached peoples. Some arrive energetic and excited, others disillusioned and weary from the continual strife of their labors.

I always have two pictures in my head when I think of Ethne conferences. The first is worship: led by a multinational team, we sing songs in a variety of languages, with moments of humor and moments of pure joy. At Ethne 2012 I was very moved by the incredible Russian, Filipino, Thai and Korean worship. The second picture is the dining hall: it is a heart-warming thing to walk in a little late and see some 400 people eating and talking animatedly together.

While it is perhaps true that these triennial events are the most visible part of Ethne, the real purpose of the movement is to stimulate initiatives and projects that result in workers moving into unreached peoples and stimulating Church-Planting Movements (CPMs)—also called Disciple Making Movements (DMM)—among related people groups. The most recent project is the Ephesus Initiative.

As with all such initiatives, Ephesus has been bubbling in the background for a long time, working its way through the relationships and thinking processes of many participants. It started with a simple question: how do we accelerate the process of reaching all peoples and whole regions?

Leaders in the Ethne movement are passionate about unreached peoples, but also ruthless evaluators of their own work. The statistics are stark: although the percentage of the world with no access to the gospel fell from 75% in 1800 to 54% in 1900, and further to 29% today, in “real numbers” the actual population of people who have never heard of Jesus grew from 674 million in 1800 to 880 million in 1900, and then doubled twice to two billion today. The number is continuing to grow, at an average rate of 57,000 new people per day, largely due to population growth. Researchers estimate that by 2025 the number of people who will have no contact with Christianity will reach 2.2 billion.

Obviously, the vast missions movement is doing much good. The growth of the church is fastest in Africa and Asia, and many remarkable stories of church-planting have been heard at each of the Ethne conferences. (Some of them are in very sensitive places, which cannot be easily put in print, but Mission Frontiers has carried some of these stories in past issues.) Yet the statistics tell us that the good being done is not good enough. Population growth alone is outstripping our efforts.

Acts 19:9-10 tells how Paul and his co-laborers worked in Ephesus for two years, and “all the Jews and Greeks who lived in the province of Asia heard the word of the Lord.” If it could happen then, why not today? This question was first asked and considered at a 2008 Ethne Steering Committee meeting. At the time the question was posed as, “How can the various strategic initiatives of Ethne work better together?” (which had always been Ethne’s intent but had yet to be achieved). Out of this discussion came the idea of focusing on two or three specific clusters and developing a coordinated effort in each.

At Ethne 2009 the various strategic tracks (Prayer, Information, Mobilization, Crisis Response, Member Care, CPM, etc.) took the discussion up more broadly. They asked, how can pray-ers, community developers, crisis responders, mobilizers, tentmakers, researchers, trainers and so on work together to see CPMs among families of unreached peoples? The participants developed the idea of “collaborative CPM initiatives,” along with a very rough initial priority list with such clusters as Sumatra, the Fulani, the Kurds and Bedouins.

In 2010 a follow-up meeting was pulled together when a number of CPM practitioners and Ethne members gathered in the United States. Participants were asked, “What would it look like to really do this?” 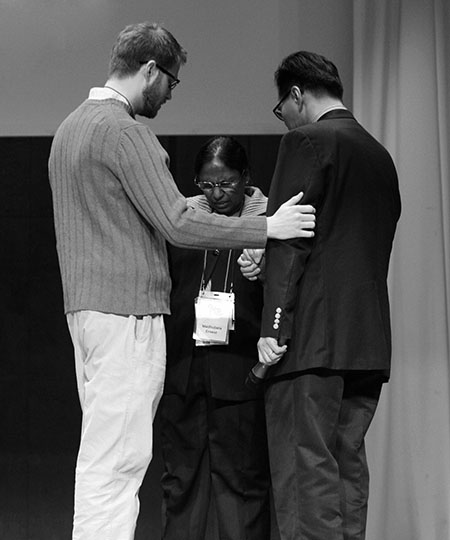 Based on these initial “brainstorming” ideas, yet another meeting was held during the 2010 Cape Town Congress of Lausanne, in which more CPM practitioners also took up the question, and after tweaking the concept they, too, agreed to be involved.

In late 2010 a list began to emerge. An Ephesus working group started with the notes and interest that had already accumulated, and framed this within the Joshua Project’s global research on unreached peoples and clusters. A “beta” version of a priority list of clusters was drafted and circulated among many Ethne members and global researchers. This draft was further refined in early 2011.

Right before the “Closing the Gap” meeting in the United States in 2011 the Ethne Steering Committee met and took up the discussion of how to make Ethne even more action-oriented. The idea of the Ephesus Initiative—now in a much stronger and more developed form—was proposed. After discussing it, the Ethne Steering Committee formally agreed to adopt the Ephesus Initiative as a strategic focus.

Ephesus was introduced broadly at Seoul 2012. Over 100 Church-Planting Movements (or disciple-multiplying movements) are known to be growing right now among specific people groups. Ethne leaders wanted to see many more CPM teams launched—but even more, to see some existing CPM teams take on whole clusters. The goal of each Ephesus Initiative team is to (1) prioritize specific, most-neglected “clusters” or “families” of people groups (mostly based on the Joshua Project list); (2) “in this generation” catalyze collaborative, reproducible Church-Planting Movements that can cascade throughout multiple people groups in a cluster; and (3) find ways to stimulate global collaboration to inaugurate movements together as a Body.

At Seoul 2012 we heard reports each day, but on the second day the participants divided into a number of working groups around people group clusters, with the intent of exploring the formation of an Ephesus team. Early meetings focused on sharing information about the cluster, and then transitioned into action steps. As with any decentralized network, some of the working groups made more progress than others.

Now comes the hard question: what next? The biggest problem with a decentralized network is not poor-quality action, but no action at all. Apathy is the killer. In the wake of Ethne 2012, to keep momentum going, a Global Ephesus Support team has been formed, including eight “fairly public” individuals (myself among them), as well as six “less public” people whose ministries might be harmed by publicity. This support team exists to help make connections and provide resources to CPM teams that want to engage whole clusters. In addition, there are presently 28 Ephesus team facilitators in eight Ephesus teams, and a fairly large training network is available.

The eight current Ephesus teams include:

In addition, some progress has been made in the Persian, Turkic and Middle East clusters, but no specific Ephesus teams have yet formed.

Also, I would like to recommend that you take a look at our 30 min documentary “Man of Peace…the storytellers of Odisha”. This film takes a close look at a large CPM that is in progress in Orissa, East India among the Hadi people. The view the film go to:
http://www.manofpeace-thefilm.org

Hi Jim, you’d need to ask that question of the Mission Frontiers folks! I’ll take a look at the film, and pass it on to others too. -Justin

Justin Long has been a missionary researcher for 20 years. Since 2010 he has served with Mission to Unreached Peoples, where he edits in-depth studies of People Group Clusters. He serves on the Global Ephesus Support Group, and regularly blogs at www.justinlong.org and on Twitter at @justindlong.