The Birth of a Movement

Birth phase—Francis of Assisi and the Franciscan movement

He went out half-naked in his hair-shirt into the winter woods, walking the frozen ground between the frosty trees; a man without a father. He was penniless, he was parentless, he was to all appearance without a trade or a plan or a hope in the world; and as he went under the frosty trees, he burst suddenly into song.

Francis’ father was furious. He had endured his son’s wild living, but Pietro Bernardone would not allow Francis to squander the family’s wealth on the poor. He dragged Francis before the Bishop of Assisi for a ruling. As a rich silk merchant, Bernardone had plans for his son to one day take over the business and become a leading man in the city of Assisi, but Francis disappointed him.

In AD 1201, Francis left his home seeking adventure as a soldier. He fought with Assisi’s forces against the city of Perugia and was captured, imprisoned, and later ransomed.

On the way to his next battle, he heard a voice ask, “Is it better to obey the servant or the Lord?” When he answered, “Lord, what would you have me do?” he was told to return home and wait. As he waited, Francis became overwhelmed by the emptiness of his life. Looking for answers, Francis made a pilgrimage to Rome, and on the steps of St. Peter’s Basilica, he exchanged clothes with a beggar and begged for his dinner.

After Francis returned to Assisi, he was praying in the broken-down church of St. Damian when a voice spoke to him from the cross: “Go and restore my house.” Taking the command literally, he rode to his father’s store and loaded his horse with fine fabrics. Selling the cloth and the horse, he used the money to minister to the needy and restore the church at St. Damian. Furious, his father brought him before the bishop for a ruling. The bishop sympathized with Francis’ generosity but ruled the money was not his to give away. Francis responded by stripping naked and laying his clothes at his father’s feet. He renounced his family ties and inheritance, declaring his trust in his heavenly Father to provide. Bernardone gathered up his son’s clothes and left, while the bishop wrapped his cloak around a trembling Francis. So began the Franciscan movement.

Rejected by his father, Francis begged for stones to restore ruined churches in the countryside around Assisi. In the chapel of Portiuncula, he read Jesus’ instructions to his disciples:

“As you go, proclaim this message: ‘The kingdom of heaven has come near.’ Heal the sick, raise the dead, cleanse those who have leprosy, drive out demons. Freely you have received; freely give. Do not get any gold or silver or copper to take with you in your belts— no bag for the journey or extra shirt or sandals or a staff, for the worker is worth his keep.” (Matt. 10:7–10)

Through his struggle, Francis found God’s calling: He would do what Jesus commanded and proclaim the message of the kingdom of heaven, trusting God to provide everything he needed.

Exchanging the mission of Jesus for wealth and security, the monastic orders had abandoned poverty to live in comfort. Francis of Assisi refused to accept the gap between the monastic ideal and everyday reality; eventually, thousands followed his example.

Francis’ dream was to live life like Jesus and his disciples did—as an apostolic brotherhood with no distinction between clergy and laity, living in obedience to God’s leading, and without the hindrance of possessions. The motivation for this was a passionate love for Christ. Bonaventure, a follower of Francis, described him as “completely absorbed by the fire of divine love like a glowing coal.” Francis’ response to the decline of settled monasticism was the birth of mobile missionary bands of friars (brothers). Wherever they went, they preached the joy of repentance, and trusted God for their needs. Francis and many of his followers came from wealthy and noble families, but they made the poor and the outcast the special concern of the Order. This was part of Francis’ commitment to reach people for Christ outside the walls of the cloister and the borders of Christendom.

Francis of Assisi was true to his calling, and his life drew others who were willing to lay down their lives. The people of Assisi couldn’t decide if Francis was a saint or a madman. A few chose to believe he was a saint. Bernard of Quintavalle was a wealthy and prominent man, yet he sold his possessions and gave away his fortune to the poor, joining Francis as a beggar. Next came Peter Catanii, a lawyer. Within a year, Francis had eleven followers. As the numbers grew, Francis organized his followers into small traveling bands who preached repentance. The Franciscans preached in the open air, on street corners, in the market places, and in open fields. Speaking in the ordinary language of the people, their vivid messages inspired and moved people to repentance and joy before God. Francis was never ordained as a priest. Similarly, those who followed his lead were ordinary, untrained men, resented by the clergy for their success.

Like Francis, founders inspire others to act. They win the trust of followers by putting their lives on the line for the cause. They demonstrate the unconventional tactics that will achieve a movement’s purposes and they protect it from those who bring their own agendas.

Francis of Assisi excelled as a founder and lived what he believed. His authority flowed from his uncompromising commitment to Christ. He had little time for organizational structures and external requirements. He excelled as a visionary but struggled to ensure the movement adapted to its meteoric rise. Regardless, he remains one of the most endearing figures of Christian history. 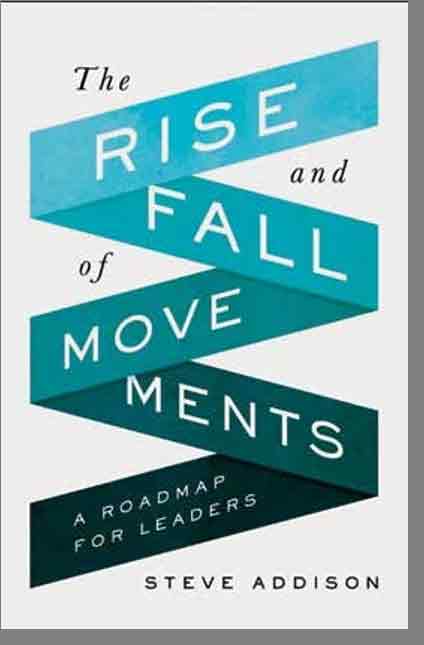 Steve Addison is a catalyst for movements that multiply disciples and churches everywhere. He is an author, speaker, podcaster and mentor to movement pioneers.
This article is an edited extract from his new book, The Rise and Fall of Movements: A Roadmap for Leaders. Visit Steve at movements.net.