This is an article from the May June 2020 issue: Tokyo 2010 Why it Still Matters

The Tokyo 2010 Global Mission Consultation, held May 11-15, 2010 in Tokyo, Japan was a celebration of the past and an embracing of the future.  The event was hosted by the Japanese Church and sponsored jointly by Asia Mission Association, Cross Global Link, Global Network of Mission Structures and Third World Mission Association.  A total of 967 delegates, representing 73 countries, attended. Another 927 observers from Japan joined and approximately 550 Japanese volunteers served participants.  Approximately 75% of all participants came from African, Asian, Latin American and Pacific nations.

A full understanding of the Tokyo 2010 Global Mission Consultation must include a historical perspective including the Edinburgh gatherings in 1910 and 1980 and the vision of Dr. Ralph Winter.

10 years ago, four gatherings, including Tokyo 2010, celebrated Edinburgh 1910’s hundredth anniversary. Because of John R. Mott’s extensive labors, the event in 1910 marked the first time in modern history that Protestant mission leaders and missionaries came together to consider how to finish global missions. Mission agencies from Europe and North America chose most delegates.

The 1910 conference generated a concrete basis for global level coordination of mission strategies and a continuation committee to follow up.  However, the Mott leadership team failed to conceive of mission agencies outside of North America and Europe—those representing missionaries from the remaining two-thirds of the world! At that time only a handful of agencies existed in these places, but they were overlooked.

In 1980, another global meeting, the World Consultation on Frontier Missions, held once again at Edinburgh, adopted the slogan: “A Church for Every People by the Year 2000.” 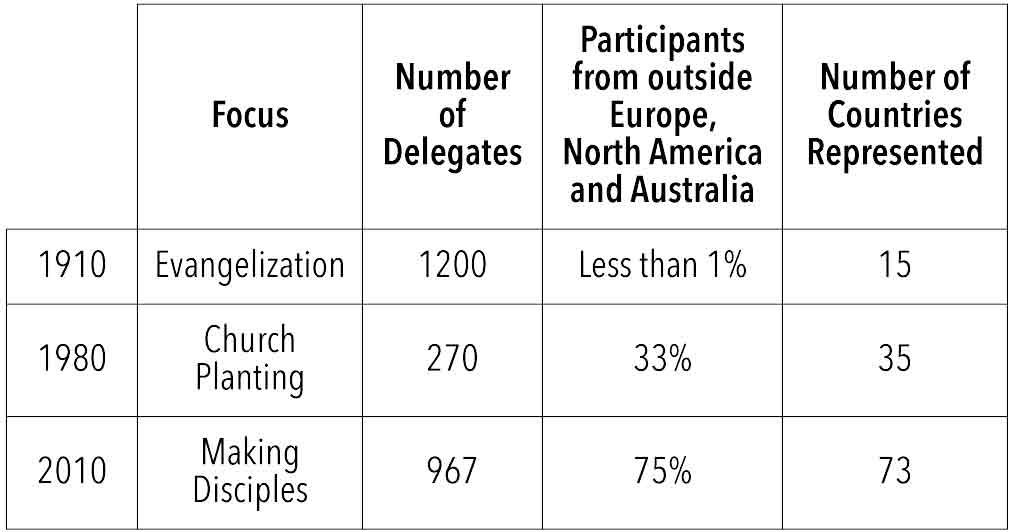 Dr. Winter had a vision for a global consultation and gathering of global mission leadership focused on the unfinished task.  Before his death in 2009, he wrote extensively about the need for a global-level association of mission agencies and his desire to see a hundredth anniversary event in 2010 organized following the format of the Edinburgh 1910 meeting. Closely involved in Tokyo 2010 preparations, he participated in each planning committee meeting and the conference plans up until his death.

The Global Mission Consultation & Celebration featured evening sessions of local “celebrations” open to anyone from Japanese churches. However, during the day, the consultation dealt in depth with subjects of frontier mission strategy and global coordination. Tokyo 2010 gathered representatives of mission-sending countries, large and small mission associations and agencies, mission- minded churches and other individuals with the desire to reach the final frontiers of the Great Commission. Mission leaders and innovators comprised most delegates. Many came from small missions, and most came with a wealth of cross-cultural mission experience focused on reaching out beyond frontiers.  Delegates also represented churches and other interested institutions.

“Making Disciples of All Peoples in Our Generation” The vision and watchword of the Tokyo 2010 Global Mission Consultation focused on the breadth of the unfinished task (representatives from all peoples) and on the depth of that task (making disciples). While Tokyo 2010 maintained the “closure” focus of Edinburgh 1910 and 1980, it also focused on an equally important dimension of the Great Commission—the purpose of our going, which is to teach all peoples to obey everything Jesus commanded.

In response to the call and vision of “Making Disciples of All Peoples in Our Generation” and as a pledge of Tokyo 2010 delegates, the Tokyo Declaration was adopted in Tokyo. The Declaration makes clear that the Great Commission is fundamentally about transformation at every level—from the individual, to the family, to society as a whole.

Tokyo 2010 sessions included twelve plenary speakers with topics such as The Biblical Foundation for Discipling Every People by Dr. Marv Newell and Global Peoples and Diaspora Missiology by Dr. Enoch Wan. Approximately 70 other presenters led workshops and discussion groups.  Tokyo 2010 archives of these presentations and more, including pictures and videos, are available at https://www.ggcn.org/tokyo-2010-gmc/

Based upon a desire to bring new information to the missionaries of the world on what remains to be done in the unfinished task of world evangelism, the Tokyo 2010 Global Mission Consultation was organized into four major tracks. The first track, Celebration, reflected on the last one hundred years of working towards fulfilling the Great Commission. Presentations focused on what God is presently doing through mission movements around the world and what we can learn from one another.

The second track, Casting Vision, looked forward to what remains to fully engage all the peoples of the world with the gospel. Special emphasis was given to least reached peoples currently with little or no missionary presence. Delegates were challenged to consider their contribution toward seeing the entire world fully engaged with disciple-making teams.

The third track, New Models, investigated Disciple Making Movements impacting major spheres and religious blocs. How is God bringing the gospel to some of the least-reached areas of the world, many of which are unreached due to the difficulty of sending long-term missionaries? Are there new fruit-bearing models for missionary sending?

The fourth track, Coordination, looked at ways to work together and to listen and learn from one another in order to finish the task. How do we keep the conversation going and develop cooperative plans to move forward with the collective message He gives us?

The idea behind these workshops and taskforces was to look in depth at four interrelated dimensions of the Great Commission:

1) From where have we come?

2) What remains to be done?

3) What is presently working?

4) How can we join together to take the gospel to where it needs to go?

Europe “Come Over and Help Us” Plea Stefan Gustavsson of Sweden pleaded with delegates, “Come over and help us!” His plea echoed the call of the man in Paul’s Macedonian vision almost 2000 years ago. In his plenary address, Gustavsson portrayed the stark reality of Europe, where the vast majority of the population has turned to secularism, atheism and agnosticism. What followed was perhaps the most moving response during the entire consultation, as Dr. Yong Cho came to the podium with tears in his eyes and as the entire assembly began to cry out to God for the peoples of Europe. The Holy Spirit moved in perhaps the most authentic and unforgettable part of the whole conference.

One of the strategy tools announced at Tokyo 2010 was the Last Mile Calling, a fully secure, on-line networking platform to enable members of the global mission community to stay connected. That platform proved to be unsustainable, but the Global Great Commission Network developed and launched a replacement called Connect.

The Tokyo 2010 Global Mission Consultation was structured to be an important opportunity for delegates to learn from one another. As one delegate described it, “I cannot express enough how much the Tokyo 2010 meeting impacted my life personally. I believe it was a watershed moment not only for me but for the Church and its mission. For me, it represented a significant shift in my spiritual journey and a broadening of my missional thinking.”

The many and varied participants in missions that came together at Tokyo 2010 adopted the Tokyo Declaration and pledged to work together. The story and impact of Tokyo 2010 continues to be written and experienced.

David Hupp serves as coordinator of the GGCN Global Steering Team. A background in business (MBA) and as a CPA led to a career in mission administration and leadership.  He served as the Tokyo 2010 Global Mission Consultation registrar and administrator and has been part of the Global Great Commission Network since its founding in 2011