What was so unique about the message and vision of Jesus? And is it possible that after 2,000 years we still don’t get it?

Jesus came preaching about the kingdom. It was a radical message because he was preaching about God’s kingdom, not the Jewish kingdom. He was crucified for it. But lest we be too critical of the first century Jews, we need to be reminded that we also can be somewhat tribal when it comes to understanding the kingdom. A new book published by WCIU Press, First the Kingdom, is a helpful reminder of this reality and will prove a useful contribution to recovering the message and implication of the kingdom of God for our time.

Written by the friends and colleagues of Peter Kuzmic to honor his life, First the Kingdom captures some of the best practical thinking on how to apply the message of the kingdom in today’s world. Peter Kuzmic’s life and theology was shaped by the geo-political forces that roiled Eastern Europe in the 1990s. He was instrumental as an agent of peace and reconciliation following the aftermath of the ethnic conflicts that devastated his homeland in the former republic of Yugoslavia. Daniel Darko, editor of the volume, describes this context well:

The Orthodox Serbs believed God was on their side while the Catholic Croats felt empowered by God to gain victory over their enemies. Christians versus Christians! Ironically, it would take Christian leaders who espoused a vision of Missio Dei that transcends denominational boundaries, ethnic divide, and social status to mobilize “Kingdom” missionaries in a decisive effort to bring hope and reconciliation, and to garner socio-political forces for transformation. 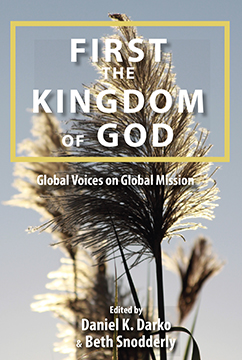 This is precisely why we need an accurate theology of the kingdom. When we are seeking first the kingdom it affects every level of society and every dimension of our world. The reality of the incredible divisions which still haunt us and are still the underpinnings of much of the world’s conflicts, tell us we need to take the message of the kingdom to heart—that there is something bigger than all of us, more important than all of us, and without it none of us will survive, and nothing will ever heal.

In one of his final books, God and Government, Charles Colson writes of the importance of having a kingdom perspective with regard to issues of church and state. He remarks: “America is not the New Jerusalem or a ‘city upon a hill,’ though some of its founders harbored that vision. Nor are Americans God’s chosen people. The kingdom of God is universal, bound by neither race nor nation” (p.135).

To some this may sound like heresy. But to others, like the Native Americans who were victimized by America’s self-proclaimed “manifest destiny,” it is a much more hopeful message. Even today, Native Americans are less than 1% evangelical Christian in spite of living in the world’s most evangelical and missional country. There is something very ironic and bizarre about this juxtaposition.

Of course it is not just in the United States where we need to recover the message of the kingdom. When we think of the relatively recent conflicts among Christians in Rwanda, Ireland and South Africa, it is clear that the kingdom of God still needs to come among us even after centuries of Christian influence. The excellent collection of essays in First the Kingdom will no doubt help us get this conversation started, and may lead us to some valuable answers. Perhaps, then, in a small way the tragedy of what took place in the former Yugoslavia can be redeemed to the glory of God.