This is an article from the January-February 2023 issue: Cascading Gospel: Movements Starting Movements

We first started catalyzing a Disciple Making Movement (DMM) in 2011 in Bujumbura (Burundi) where I live. When we had 189 groups in seven generations, we did  a baptism of around 800 people. One day in 2013, we were praying for various provinces we wanted to impact with the Gospel. One of our leaders, Oliver, said, “I feel I want to go to the province of Makamba, especially the community of Nyanza-Lac” (over 130 km away).

I asked him, “Do you know someone there?”

He  said, “No,  but I have already prayed for the area. I will go there and see if God will connect me with somebody.” (Makamba is  the  southernmost  province of the country, the same ethnic groups, language, and culture as Bujumbura.) He went there and prayed and started looking for a person of peace. After he got off the bus, he told someone, “I want to connect with somebody who is a pastor in this area,” and was taken to the pastor of a local church.

The pastor told him, “I don’t have time to talk to people right now, because I’m going to a hotel. But maybe next time we meet I’ll have time.”

So Oliver said, “Okay, show me the hotel. Maybe I’ll sleep there tonight.” When he went to the hotel, he met Mbonyeyesu, who worked as a night security guard at the hotel. He stayed and chatted with Mbonyeyesu and started sharing with him.

After a while, Mbonyeyesu asked him, “Can you come to my house and talk with my wife as well?” Mbonyeyesu brought Oliver to his house and they started to do Discovery Bible  Study  together.  Mbonyeyesu  said,  “I feel I understand Scripture better, now that we are doing a Discovery Bible Study. I want to spend more time learning together so I’ll know more about Jesus.”

Soon Mbonyeyesu and his wife had a number of women coming to the house to discuss Bible stories, including some stories especially appropriate for women. Those stories helped the women understand the Bible’s message.

After four months of growing in the Lord, Mbonyeyesu had planted 20 churches in that area. His daughter, Niyokwizera Nicole, married a man named Revenian. When Revenian married her, she had already planted two churches. They went to the southern part of the province and started a Discovery Bible group there, which multiplied and became 68 new groups.

By 2016, they had 17 generations of groups in Makamba, and Revenian began outreach in an area where Pygmies live. We had a small water filter project in the community of Pygmies, and Revenian said, “I can go with them, because I live not far from them. I feel I can serve in this community.”

We teach people how to use the water filters, so we spend 21 days in someone’s house making the water filter. The people we have trained to make water filters are  storytellers—very  effective  at  sharing  stories. The storytellers spent all those days sharing stories among the Pygmies, and Revenian remained in the community to help them multiply. He met a  Pygmy lady named Pelagie, who lives in part of Nyanza-Lac.

She received Revenian and started doing Discovery Bible Study with him. Pelagie’s husband also came to Jesus and started to influence other people. Together, Pelagie and her husband planted 36 new churches.

Those churches have multiplied to 23 generations, for   a current total of 618 churches planted in communities among  the  Pygmies  in  the  area  of   Nyanza-Lac. The Pygmies in Nyanza-Lac went and reached a different group of Pygmies in Kabonga, near the border of Tanzania,  where 75 churches have now been planted,  in three generations. This group from Revenian and Pelagie has also sent people into the Province of Rutana (Burundi), where they have already planted six new churches. Pygmies feel most comfortable communicating with other Pygmies.

The community in Nyanza-Lac also sent a worker to Kigoma, Tanzania, and seven churches have already been planted there among the Sukuma people.

We recently went and did internal qualitative audits to help these leaders check on the DNA of the disciples and group leaders in these places where the Lord has brought fresh harvest. 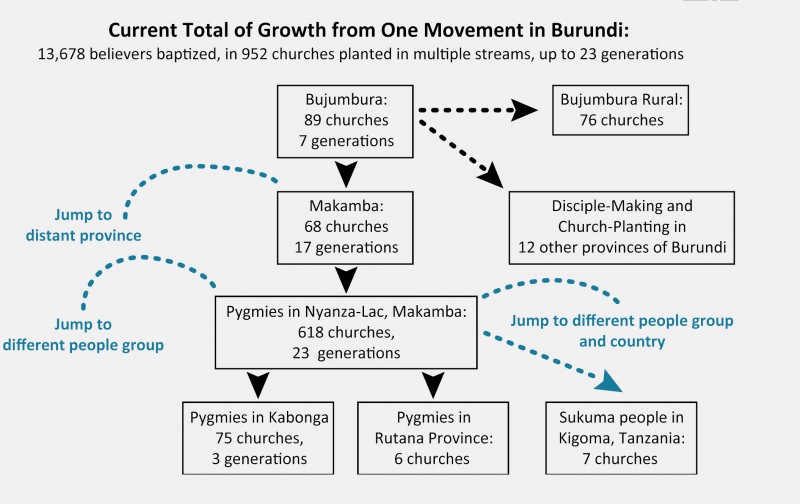 Bahizi Leodegard is founder of Burundi Harvest Mission. He was trained at Lifeway Mission Institute (Nairobi, Kenya), and serves as a Catalyst Disciple-Maker, Church-Planter and Coordinator of Lifeway Mission International. He was born and raised in Bujumbura, Burundi, and came to Jesus in January 2000. He is married to Liliane Ndayisenga and they have three daughters.