The 10/40 Window region is home to 3 billion Muslims, Buddhists and Hindus, the vast majority of whom remain with little or no access to the gospel in their language and culture. Over 90% of the world’s least-reached people groups are in this region, among which 50,000 people will die each day without Jesus.

One answer to this spiritual darkness is a new initiative called Light the Window, which aims to equip 10 million believers around the world to pray and give sacrificially to reach 365 influential people groups in the 10/40 Window region. These 365 groups represent over 2.5 billion individuals who are the least-reached and least-evangelized people in the world. Mission strategists refer to these large groups as “gateway peoples” because if a breakthrough happens among them it may have a huge impact on the surrounding peoples, who are often related linguistically and culturally to these larger groups. In one way or another, most of the world’s unreached peoples are influenced by or connected to these gateway peoples.

At its core, Light the Window is a strategic list for prayer and priority giving. Around this core are many related components which will equip the body of Christ for united impact in the 10/40 Window. Among these are monthly concerts of prayer, an online prayer exchange, a global strategic fund, and a service network. These four components are briefly described below.

Each of the 365 gateway peoples on the Light the Window list are grouped into one of 12 cultural regions, one for each month (see table). For example, in November the focus will be on Central Asian Muslims and in April the focus will be on Hindus of North India. Each month Light the Window participants will be encouraged to organize and gather in a “concert of prayer” for the particular region in focus. The concept of “concerted” prayer relates to two important dimensions of intercession: corporate unity and specific purpose. This is based on the principle which Jesus gave the church, “If two on earth agree about anything they ask, it will be done for them by my Father in heaven.” (Matt 18:19, ESV). Thus the purpose of a “concert of prayer” is not so much to mobilize or spread awareness about the 10/40 Window (though that will certainly happen), but it is more to enter into agreement as the corporate body of Christ in order to receive the authority God desires to give us to reach the nations.

One of the major purposes of Light the Window is to equip intercessors around the world with prayer updates from the field, and to make these available in every major language with a significant number of evangelicals. To facilitate this field/intercessor connection, an online prayer exchange is being set up that will enable field practitioners to upload updates that will then be translated by volunteers in every country. In addition to this, a Light the Window app for smart phones is being developed which will allow participants to log their prayer participation and receive live prayer feeds from the 10/40 Window for the people groups they are following. Each year, these field reports will be edited and coalesced to update an annual Light the Window intercessory guide, which can be used in print or digital form.

If Light the Window achieves its goal of equipping ten million participants around the world, the potential for giving to fund strategic projects is enormous. Using “crowd-funding” technology and concepts, participants will be encouraged to give small regular contributions to fund big projects. Crowd-funding sites like Kickstarter and Indiegogo are raising hundreds of millions for funding commercial ventures through large numbers of people working together. The time has come for the global body of Christ to leverage its enormous giving power to finish the task of reaching all peoples with the gospel. By faith, Light the Window is aiming to raise at least $1 billion dollars from 10 million participants to fund strategic projects in the 10/40 Window. (This comes to just $10 on average per participant each month.) With an estimated 800 million evangelicals in the world, it is reasonable to assume that at least 10 million believers will have the capacity to participate in this strategic fund.

In addition to prayer and giving, participants in Light the Window will be encouraged to join service teams, which are being called PRIME teams, that serve the ongoing field work among unreached peoples. PRIME stands for prayer, research, innovation, media and engagement. PRIME centers will also be established on the field that will serve full-time as coordinating hubs for PRIME teams, with a focus on a specific gateway people or people-cluster. These teams and centers will be linked together through a network of organizations and ministries which specialize in one or more of the five PRIME areas.

Light the Window and PRIME are networks which are owned by the entire body of Christ and mission community. Any ministry, church or organization committed to the Great Commission under the Lordship of Christ can participate in these initiatives and incorporate them into their existing ministry platform. They are free gifts to the global church with no strings attached (or to put it in tech-speak, they are “open-source” programs that can be freely deployed and adapted for multiple platforms). Light the Window and PRIME plan to officially launch in 2015. Those interested in participating in Light the Window can help beta-test the program by registering at www.ltw2020.org.

You may also write to [email protected] for more information. 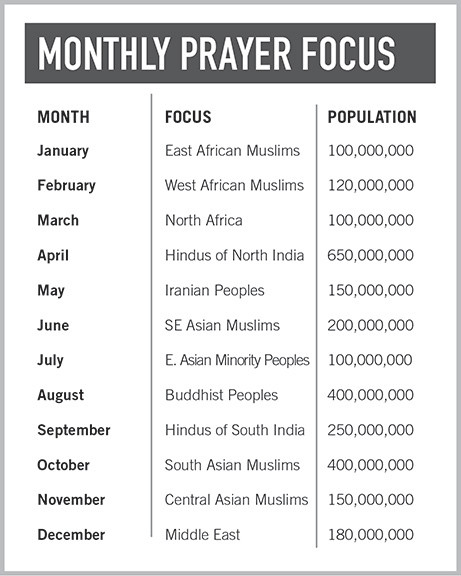