Discipleship That Transformed a Nation and Changed the World

When John Wesley was born in 1703, four million out of Britain’s five million people lived in absolute poverty— unless they found enough food for that day, they would begin to starve to death.

When John Wesley launched a Church Planting Movement in this context, he not only changed the eternal destinies of an estimated one million people who came to Christ through his ministry, he changed their economic status as well. Not only did the Methodists he led get saved, they got out of poverty and became a powerful influence in discipling their nation. Wilberforce and other “spiritual sons” of Wesley honored him as the “greatest man of his time.” The Methodists made such an impact on their nation that in 1913, historian Élie Halévy theorized that the Wesleyan revival created England’s middle class and saved England from the kind of bloody revolution that crippled France. Other historians, building on his work, go further to suggest that God used Methodism to show all the oppressed peoples of the world that feeding their souls on the heavenly bread of the lordship of Christ is the path to providing the daily bread their bodies also need.

Could Church Planting Movements of our day apply these same teachings with similar impact?

Coming to Christ under the influence of the Wesleyan Methodists changed people by making Jesus the Lord of their lives. “Methodists” were given that name because they methodically sought to obey the Lord in all areas of their lives by obeying three main rules: • one, do no harm;

The resulting spiritual change affected their daily lives in four main ways, each of which improved the social and economic status of the new believers:

To help Methodists obey the first rule, they gathered together into cell groups where they confessed their sins to one another and prayed for one another to receive self-control, which is a fruit of the Holy Spirit. They thus aided one another in gaining the strength to abandon sinful habits which had previously ruined their lives and consumed their resources.

In explaining the rule against doing harm, Wesley specifically mentioned drunkenness and fighting. When describing the change made by coming to Christ, he noted “the drunkard commenced sober; the whoremonger abstained from adultery and fornication.” Wesley may have mentioned the three sins of drunkenness, fighting and immorality because their effect was so obvious in his society.

Hogarth’s print, Gin Lane, shows the social decay of Wesley’s age. Gin had recently been invented. One-half of each year’s grain crop was turned into this poisonous liquid instead of being baked into healthful bread. A quarter of the houses in London were licensed to sell it and the police were powerless to stop the crimes of desperate drunken men.

The police were also overwhelmed by the fighting and killing of the mob. The law executed people for 169 capital crimes, but the regular march to the gallows did nothing to make the streets safe at night. Sexual immorality was common at all levels of society, and the nation was overwhelmed with illegitimate children.

When people got saved, they repented of their sinful lives. Forsaking drunkenness, fighting and immorality made obvious changes in their lives. Believers stayed sober and quit doing the crazy and dangerous things intoxicated people do. They stopped fighting and thus avoided the injuries and feuds that destroy productivity. They abandoned promiscuity and started valuing their families and raising their children. Simply renouncing these three self-destructive behaviors greatly improved the economic lives of the Methodists.

Begin a New Life of Holiness

While Wesley’s first general rule stopped the downward path of the Methodists, his second general rule, “Do all the good you can,” led them out of abject poverty. Wesley described this positive change: “The sluggard began to work with his hands, that he might eat his own bread. The miser learned to deal his bread to the hungry, and to cover the naked with a garment. Indeed the whole form of their life was changed: they had ‘left off doing evil, and learned to do well.’”

In his second rule Wesley said that Methodists should live with “all possible diligence and frugality” and “employ them [other Methodists] preferably to others, buying of one another, [and] helping each other in business.” These new lives of honesty and industry helped some Methodists succeed in business and others to become dependable and truthful employees. Besides raising their incomes, Methodism helped people curtail needless expenses and save their money for worthwhile endeavors. Wesley noted that the disciplines of the Christian life often lifted people from poverty: “For wherever true Christianity spreads, it must cause diligence and frugality, which in the natural course of things, must beget riches!”

A third way in which salvation changed the economic life of Methodists was by teaching them to read. One of the means of grace which Methodists used in obedience to Wesley’s third rule was attending Methodist meetings. At these meetings Methodists were urged to read the Bible and taught to sing the hymns of Charles Wesley. As illiterate people learned to sing these hymns, they also learned to read.

Charles wrote thousands of hymns for the people called Methodist, who usually learned them by singing them one line at a time as they were called out by the song leader. This “lining out” of the hymns enabled the singers to memorize the songs they sang. When John later published the hymns and sold them cheaply, people could match the words they knew by heart with the printed words on the page, and thus teach themselves to read. Since the Methodists usually sang five hymns at every meeting, each gathering functioned as a thirty-minute adult literacy session.

Because literacy was the admission ticket to the middle class, Methodism provided the means for the upward mobility of thousands of poverty-stricken people.

A New View of Money

Finally, Methodism gave people a new view of money. Wesley often preached on this topic; his most famous message on money made three points: Gain all you can; save [economize] all you can; give all you can.

First, Methodists were to make as much money as they possibly could. Wesley said that despite its potential for misuse, there was no end to the good money can do: “In the hands of [God’s] children, it is food for the hungry, drink for the thirsty, raiment for the naked. It gives to the traveler and the stranger where to lay his head. By it we may supply the place of a husband to the widow, and of a father to the fatherless. We may be a defense for the oppressed, a means of health to the sick, of ease to them that are in pain. It may be as eyes to the blind, as feet to the lame: yea, a lifter up from the gates of death!” Wesley urged Methodists to gain wealth through honest wisdom and unwearied diligence. “Put your whole strength into the work. Spare no pains,” Wesley exhorted. “But make sure the work does no harm to oneself or to the neighbor. Thus Methodists must avoid work with dangerous chemicals or in unhealthy environments. They must also not endanger their souls by any work that involves cheating or lying. Likewise, any trade that hurts the body, mind, or soul of the neighbor is out of bounds.” Thus distilling liquor, running a tavern, or peddling patent medicines were forbidden to Methodists.

Wesley’s second injunction, “Save all you can” had many practical implications: save all you can by refusing to gratify the desires of the flesh. “Despise delicacy and variety and be content with what plain nature requires.” Refuse also the desire of the eye with superfluous or expensive clothing, and reject the pride of life, buying nothing to gain the praise or envy of others. Wesley pointed out that gratifying such desires only increases them, so if people were to throw their money into the sea, they would be doing themselves and others less damage than if they bought needless goods.

Finally Wesley told Methodists to “Give all you can.” He pointed out that all money comes from God, and that people are not the owners, but only the trustees, of God’s money. He said that God wants believers to make sure that they and their families have adequate food, housing, clothing, tools, and savings to do all the work which God has appointed for them to do. He then stated that any money beyond these necessities must be given to the poor. “Render unto God not the tenth, nor a third, not half, but all that is God’s (be it more or less) by employing it all on yourself, your household, the household of faith, and all mankind in such a manner that you may give a good account of your stewardship.”

Altogether, this advice stirred Methodists to become “early adopters” and to benefit from the new opportunities the Industrial Revolution afforded.

Wesley’s teaching to pursue wealth in order to use it for good was not without its danger. Toward the end of his life he gave increasing attention to the dangerous temptation to justify buying whatever we can afford.

Coming to Christ through the Methodist movement changed the lives of a million people in Britain and North America in the eighteenth century. As in other cases of “redemption and lift” through the power of the Gospel, most of these people and their children moved from the desperation of hand-to-mouth poverty to the security of middle-class life as they made Christ their Lord and experienced the impact of His power on their economic lives.

As these people moved up the social ladder, they began to influence the political life of their nation. They helped to transform Britain from an eighteenth-century kleptocracy— where the powerful used the government to fuel their lives of indulgence by exploiting the poor, into a nineteenth century democracy—which abolished slavery and used its empire to enrich the lives of every subject of the crown.

Here are three worthy efforts to summarize Wesley’s influence and/or his perspective on money:

Money is adapted from my “Four Lessons on Money” MissionFrontiers.org/issue/article/whatwesley-practiced-and-preached-about-money 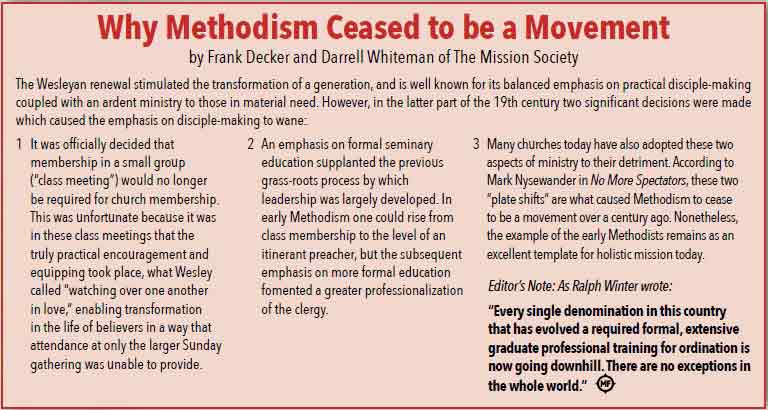 Dr. Charles White is a Professor of Christian Thought and History at Spring Arbor University. He has helped in Bible translation in ten different languages, as well as teaching Perspectives and other subjects in Nigeria, Rwanda, Ethiopia, India, the Philippines, Australia, Canada, Mexico, Poland, and Ukraine. He and his wife have four grown children and fourteen grandchildren.

Robby Butler is General Director for Mission Network, production manager for Steve Smith’s No Place Left saga and editor for James Nyman’s Stubborn Perseverance. He researches what is working best to advance God’s kingdom, then distills this to equip others for greater fruitfulness.