This is an article from the January-February 2000 issue: Short-Term Missions

Unintended consesquences and misunderstandings in mission

We really want to help. That desire often grows as our faith and our love for the Lord grow.

But sometimes--especially for those of us in the West--it grows out of our guilt. We feel guilty that we have so much. Living amidst our culture and economy of materialism and seeing the needs of others in the world we are compelled by the Word of God to help.

Several articles in this issue recommend getting people into another culture in order to get them thinking differently about their world. Naturally, the longer a person is in a new situation the more they are able to understand--if they are looking. Most who have spent time in more than one culture agree that real life experiences with people from other backgrounds greatly broadens our own vision, even when we don't fully understand what is happening. Unfortunately--in places like India and most of Asia--we often don't even realize that we don't know what is happening.

The biggest potential problem is that we can do more harm than good while we are there. This is true of anyone who goes to another country or culture--long or short term.

A recent article in the Los Angeles Times (Sept. 16, '99) told of a couple who practice dentistry in Africa several months a year. They roam around like nomads working with nomads in an RV full of dental equipment and supplies. They don't do cosmetic work. They pull teeth--and that is about all.

Why? The articles implies that they are good people. They want to help. And it costs them about $50,000 per year. (The article doesn't say anything about their faith.)

But that is not the why I had in mind. Why do these nomadic people called the Masai need their teeth pulled? The answer: candy brought in by tourists--sugar--rots their teeth. Sure, lack of tooth brushing doesn't help. But they are pulling kids teeth far more often than should be necessary.

As I read the article, I wondered, how many pieces of candy were given by short-term teams who were given these instructions back home to, "take this candy so you can attract kids and perhaps you can share with them"?

Sure, it would be better to have rotting teeth that need to be pulled than to not have a clear chance to come Christ. The bigger question is, how is the Gospel heard when it comes through groups who don't understand the culture? Mission Frontiers has tried to address this in several issues and articles over the last few years.

Recently I read a pamphlet entitled, "Will We Survive Western Missionaries?" by Dan Drápal. The 54-page booklet contains reflections from a Czech pastor on his meeting Western missionaries.

Drápal was a pastor of a state church in the Czech Republic before he was a believer. During some very difficult years He came to the Lord. A year and a half later he met some Navigators. He was greatly blessed, served and discipled in a culturally appropriate way--albeit a way that was not approved by the government at the time. Once the government was overturned, the floodgates opened and all kinds of well-meaning people entered to "help." He writes:

in the first half of 1990, we were flooded by missionaries. This influx lasted for nearly two years. I believe that in 1990-1991 I had one visit a day on average ... Since I will write many critical remarks, I want to make it plain that occasionally there were some real jewels among them. Sometimes we were visited by people with excellent teaching, with humble attitudes, and with viable proposals. We still cooperate with some of them.

On the other hand, we had some very bad experiences.

In talking about the people that visited him, he noted that they fit into two categories. The first were the people who really were there to serve. The other he describes as people who "did their own thing."

It was very common that some people coming from the West wanted to perform some drama, hold hold a meeting. They turned to us to arrange it. We were supposed to organize all the permits, to rent a hall, to arrange and distribute the leaflets--they generously paid for it, performed their act--and went back home. Then we received their newsletter about how they "did a mission campaign" in Eastern Europe. They did not bother to consider if their activity was really worthwhile, what its real impact was, if it was really the thing we needed, and if we would not have been able to do the same thing better

Speaking with great humility, he points out many who helped and served ... and many who wanted to preach Western style without considering what he thought.

As we encourage people to do short term (or long term) let us not forget the key issues related to the people we want to serve. There is no magic in a Western style evangelisitic meeting. But there is power when the Spirit of God leads us and works through us--even if we don't know what to do but are dependant on Him.

Greg Parsons is the Executive Director of the U.S. Center for World Mission. He also serves on the boards of the IFMA, EFMA, the Adopt-A-People Clearinghouse and a sending agency. [email protected] 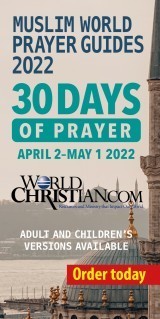