Declaring the Wonders of God in Our Own Tongues

Africa, Mission and the Making of World Christianity

In the early 2000s Andrew F. Walls, clearly the doyen of studies in world Christianity in the 20th century, drew attention to the wide recognition that Christianity had become a primarily non-Western religion, both in terms of regional balance and ethnic composition.  This observation is not necessarily original to Walls, but he has certainly been one of its main proponents.  For our purposes here, it is the interpretation that Walls gave to the African continent in the changing phase of world Christianity that makes his observation more significant:

The question then remains: what are the developments that have taken place within Christianity, as far as Africa is concerned?”  A number of these readily come to mind, including certain seismic changes generated by the activities of indigenous charismatic prophets and movements during the opening decade of the 20th century.  The salient factor in the movements we have in mind here is the experience, manifestations, and power of the Holy Spirit as “lived experience;” and they started “charismatizing” the African Christian landscape a few years before developments at Azusa Street came to attention.

This presentation then uses the example of African initiatives in pneumatic Christianity as a focal point in reflecting on the relationship between Spirit-empowerment, religious transformation, and mission as a non-Western endeavor.  Every genuine revival of the Christian faith outside its former strongholds in the West is a sign that, inspired by Spirit-empowered renewal, modern day gentiles are declaring the wonders of God in their own tongues.  This is a process that in Africa has historically been facilitated by vernacular translations of the Bible, and for, Pentecostals in particular, the active conscious and even aggressive forms of evangelization.  It is thus not surprising that Pentecostal/charismatic Christianity is credited for the transformation of faith that has been underway in Africa since the middle of the 20th century. 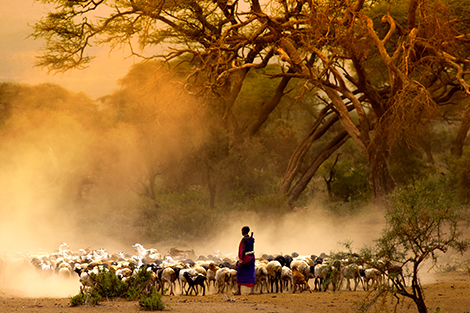 Paul Gifford was puzzled that “Africa is not reacting to globalization by revitalizing African traditional religion” but instead appeared to be opting into exotic religions.”[2]  The “exotic” religions referred to here are the Spirit- empowered revivalist movements that started burgeoning in Africa from the beginning of the 20th century.  A number of them may have inveighed against aspects of African traditional religions, but the unique thing about the movements under discussion here is that in their spirituality they sustain African worldviews of the power of the supernatural and mystical causality.

Throughout their history, many of the leaders of African revivalist movements have rejected Western understandings of beliefs in witchcraft, for example, as a figment of the popular uneducated imagination or even a psychological delusion.  African pneumatic movements have operated on the basis that witchcraft is real and a major factor in African underdevelopment accounting for poverty, squalor, disease and communal stagnation.

Ruth Marshall calls for an approach to the study of revival movements in Africa that “restores intelligibility to religion in its irreducibility, to make sense of the inherent rationality of its disciplines and practices, over and above its social, cultural, or political functions.”[3]  One may not appreciate the spiritual interpretations that pneumatic movements with their prophetic ministries give as underlying factors of the most mundane of problems in African societies unless one takes their religious faith seriously.  To their credit, new Christian religious movements in Africa create the appropriate Christian ritual contexts for the restoration of disturbed persons and physical spaces to proper functioning order in ways that take indigenous contexts seriously.

In Ghana and Zambia new governments have invited independent charismatic pastors with the requisite anointing to spiritually cleanse the seats of governments, and a Pentecostal archbishop in Ghana publicly prays for the Holy Spirit to “arrest” the declining fortunes of the local currency. Efforts such as these tell much of the inseparability between sacred and secular realities in the African religio-cultural realm.

African Revivalism and the Public Sphere

These reflections devote attention to how different Spirit-empowered communities in Africa are illustrative of the shift in Christian presence from the Northern to the Southern continents.  The power of numbers comes with influence, and Spirit-empowerment means, among other things, a call to impact the public sphere.  In his book In the Days of Caesar Amos Yong notes that the “apoliticism” that characterized the attitude of early Pentecostals in the public sphere has given way to a greater degree of political engagement because of the changing nature and demographic compositions of contemporary Pentecostal movements.[4]

At the grassroots level, Africa’s older independent churches have, for example, appeared apolitical, but being the first groups of religious mass movements in Africa, polictical powers were forced to pay attention to them and even court their friendship.  After Ghana’s 1966 coup d’état, for example, the lot fell on Prophet C. K. Wovenu of the Apostles Revelation Society, a new independent church, to “exorcise” the seat of government.  The deposed president Kwame Nkrumah was believed to have accumulated, in his religious world, an array of non-Christian religious powers for his protection.  The power to deal with the supernatural was considered to be beyond limits for the historic mission ministers with their lack of charismatic power, in spite of their academic credentials.  Thus, today, when public office holders look for persons who understand the language of spiritual power to deal with supernatural evil, the choice is always from the ranks of the pneumatic movements.

The co-option of the early independent churches into the political power struggles in Africa was one sign of the significance of those movements.  The importance of the early independent churches is also seen in the fact that academics interested in the study of Christianity in Africa, as I point out below, were forced to take notice of them as important subjects of serious research. The newer Pentecostals are even more prominent in the public sphere, given their better-educated leadership, their extensive uses they make of modern media and the youthful congregations they have attracted.  In spite of the fact that the two sets of movements-the AICs and the Pentecostal/charismatic movements-developed within different historical and socio-cultural contexts, the overlaps in their spirituality point to the fact that they offer something that touches nerves within African religious sensibilities.  Andrew F. Walls has this to say about their phenomenological differences and theological convergences:

Until recently these prophet-healing churches could be held the most significant and the fastest-growing sector of the indigenous churches.  This is no longer so certain. Nigeria and Ghana...are witnessing the rise of another type of independent church.  Like many prophet-healing churches, they have often originated as prayer or revival groups outside older churches.  Like the prophet-healing churches, they proclaim the divine power of deliverance from disease and demonic affliction, but the style of proclamation is more like that of the American Adventist and Pentecostal preaching.  Gone are the African drums of the aladuras; the visitor is more likely to hear electronic keyboards and amplified guitars, see a preacher in elegant agbada or smart business suit and a choir in bow ties.  Yet these radical charismatic movements are African in origin, in leadership, and in finance.  They are highly entrepreneurial and are active in radio, television and cassette ministries as well as in campaigns and conventions.[5]

The first group, the AICs or prophet-healing African Independent Churches, started at the dawn of the 20th century and the second, is the charismatic churches or contemporary Pentecostals at the end of the same century.  What they have in common, as Walls suggests in the quotation above, is an emphasis on the power of the Holy Spirit for Christian life and public witness.  In the words of Walls, “All the new movements share with the prophet-healing churches a quest for the demonstrable presence of the Holy Spirit and direct address to the problems and frustrations of modern African urban life.”[6] 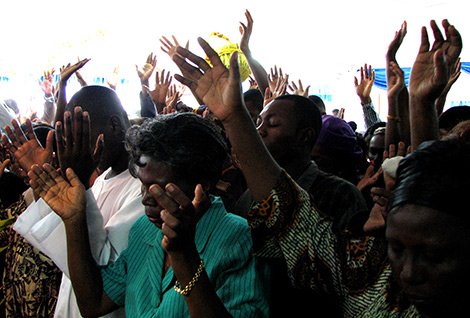 There are both continuities and discontinuities between the two groups, but each in its own way reflects African options in the appropriation of Christianity.  In both cases, there are wide variations in the nature of these movements so I use the expression pneumatic Christianity, to refer to them in a bid to cater to the diversity that they bring to the religious parade in Africa.

I take it for granted that both the old and new African initiatives in Christianity appeal primarily to the Bible for theological and ecclesiological legitimization.  When people started attending these churches, the reasons assigned included the fact that they offered a more vibrant, Spirit-filled, and experiential worship than the historic mission denominations.  They functioned within a theologically interventionist mindset that challenged the rational and cerebral nature of historic mission Christianity.  The healing and prophetic ministries of the charismatic prophets of the AICs proved very popular in Africa. It is the reason why Harold W. Turner opted to call them “prophet-healing” churches.[7]

The world has moved on and young people in particular are attracted to the contemporary Pentecostals, or “new paradigm churches,” as Donald E. Miller calls them, in the North American context, partly because of their trendy Christianity, entertainment culture and media-driven worship services.[8]

The career advancing opportunities for young graduates and business executives, and the social context in which young people can find future partners, are both important parts of the appeal of these new charismatic churches for Africa’s upwardly-mobile young people.  Their messages of motivation have also struck a responsive chord among young people who are in search of new sources of inspiration away from the politics of corrupt African leaders.

Photo “This is how they do church in Africa” by Jake Stimpson is licensed under cc by 2.0