This is an article from the September-October 2020 issue: Hunting the Movement Killers

Are We ACCELERATING or INHIBITING Movements to Christ?

Those with a heart for unreached peoples have the choice to pursue certain behaviors that have the potential to accelerate the spread of the gospel. These “accelerators” may help a new fellowship in an unreached people group become a large-scale movement to Christ. By contrast, we may consciously or inadvertently deploy “inhibitors” that may make it difficult for that fellowship to ever become a movement.

A Word about Movements

The term “movement” implies rapid growth in the number of believers, beyond the influence or control of the ones who introduced the gospel. “Church-planting movements”, such as the ones discussed in David

In this article my focus is on “movements” in general, whether church-planting movements or insider movements. My interest is in behaviors that tend to accelerate the spread of the gospel, regardless of the ethno-religious identity that is chosen by the new disciples of Jesus.

Jesus told three parables that predicted the rapid spread of the kingdom of heaven: the Parables of the Yeast, the Mustard Seed, and the Sower. The first conclusion that we can draw from these three parables is that Jesus expected dramatic growth in his Kingdom.

In the Parable of the Mustard Seed (Matt. 13:31-32), Jesus says, “The kingdom of heaven is like a mustard seed… Though it is the smallest of all your seeds, yet when it grows, it is the largest of garden plants and becomes a tree.”

In the Parable of the Yeast (Matt. 13:33), Jesus says, “The kingdom of heaven is like yeast that a woman took and mixed into a large of amount of flour until it worked all through the dough.”

And in the Parable of the Sower (Mark 4:20), Jesus says, “Others, like seed sown on good soil, hear the word, accept it, and produce a crop—thirty, sixty, or even a hundred times what was sown.”

A Strategy for Kingdom Growth

The second conclusion that we can draw from these three parables is that Jesus had a specific strategy in mind for spreading the gospel in order to achieve dramatic growth. He recommended implanting the gospel like yeast so that it leavens, and planting it like a seed so that it grows in the new soil.

I believe that contextualization is insufficient on its own to lead to movements, because two other factors need to be taken into account—identity and community. While the gospel may be introduced in a highly contextualized manner, the identity that new believers choose and the way they interact with their community will have a great effect on whether others from their culture will make a similar choice to follow Jesus.

Theory vs. Practice of Contextualization

For many, the practice of contextualizing the gospel has been primarily cultural: the attempt to present the gospel consistently with local cultural forms, using local language, wearing local dress, using contextualized translations of the Bible, etc. However, these attempts to culturally contextualize the gospel are often practiced along with behaviors that are at odds with full contextualization.

A culturally-contextualized gospel can be presented in a way that leads new believers 1) to adopt a new identity that other locals perceive as foreign, and 2) to associate with other new believers that other locals perceive as extracted communities. Thus, a new fellowship of believers may express a culturally contextualized gospel, yet have a foreign identity and be considered an extracted community.

To the extent that new believers are perceived by others as having chosen foreign identities and joined a foreign religious community, the opportunity for the gospel to rapidly spread in that people group is

dramatically diminished. This will be true even if they are highly contextualized culturally; their foreign religious identity and membership in a foreign community counteracts the benefits of their cultural contextualization.

Inhibitors vs. Accelerators of Movements

Accelerators for Individualistic vs. Communal Cultures

“Individualistic cultures” are highly individualized with fractured families that don’t live in extended community (i.e., the majority of Western cultures). “Communal cultures” are community-oriented with

tight-knit families that live in extended community (i.e., the majority of Muslim and Hindu peoples). Gospel- spreading strategies that are most effective for individualistic cultures will tend to be less effective for communal cultures, and vice versa.

For example, a communal culture places a high value on keeping its members part of the community, and will tend to resist any religious invitation that will lead its members to become “separate” or “foreign.” Individualistic cultures are more fragmented, and its members have greater freedom to separate from those around them into a separate sub-culture.

Therefore, a gospel-spreading strategy that leads to foreign identities and extracted communities will face higher resistance in a communal culture. Family members and community members will tend to exert great pressure on new believers to “return to the fold,” and if they don’t do so, they will tend to expel them from the community and have nothing further to do with them. Thus, the new fellowship of believers may seem successful from an outside perspective, yet they may have limited ability to reach back into their community with the gospel of Jesus.

Spreading the gospel in a communal culture should be done in a way that is more likely to lead to movements to Christ. It should lead to communities of believers that are not seen as “foreign,” but as “still part of our community,” so that the gospel can spread more easily.

communal cultures. They may even be expected to do so if they are sent by Western mega-churches that have experienced great success by pursuing strategies well suited for their individualistic cultures.

Missionary teams and their support networks may find these tables useful in prayerful planning and evaluation. Any one action in isolation is unlikely to significantly influence a movement. But—taken in whole—consistent use of accelerators in communal cultures is more likely to result in movements to Christ than consistent use of inhibitors. 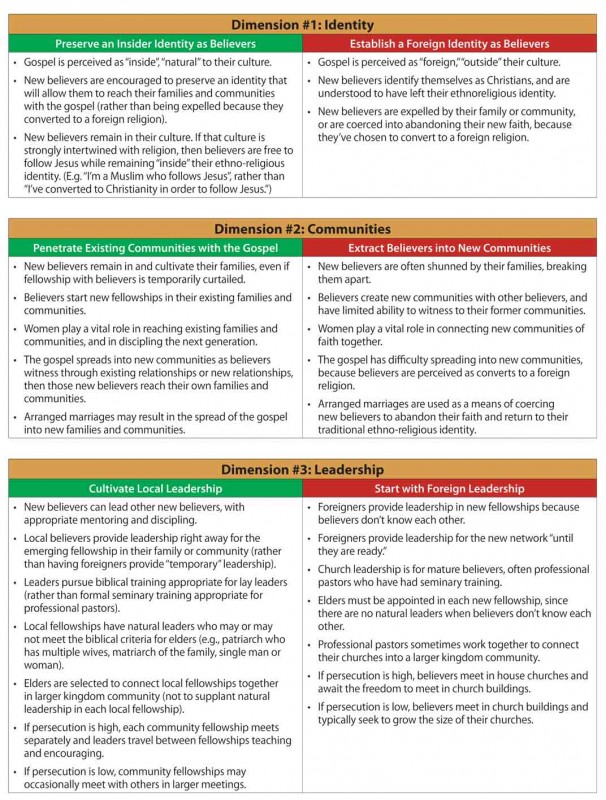 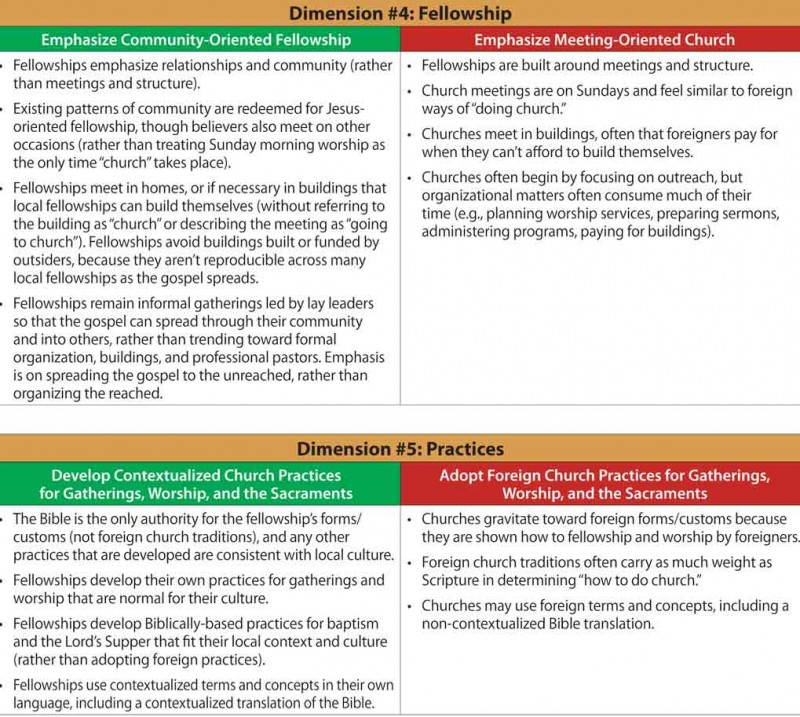 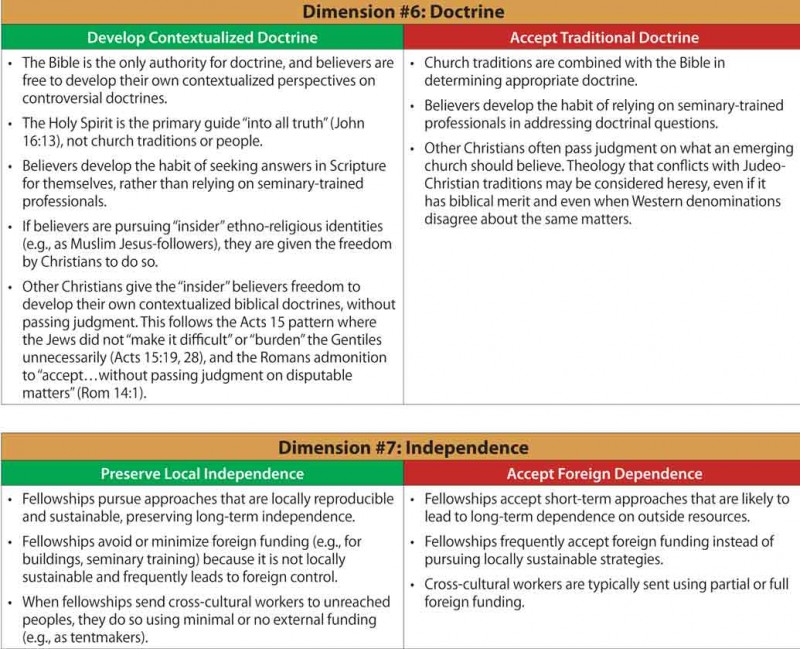 We have to be willing to allow local believers, under the guidance of the Holy Spirit and the discipline of Scripture, to discern what is most appropriate for their context. We have to be willing to echo the early church leaders in Acts 15:28—“It seemed good to the Holy Spirit and to us not to burden you with anything beyond the following…” The early Jewish leaders released the Gentile believers to comprehensively contextualize their identity, doctrines and ways of “doing church.” The Gentile believers then penetrated existing communities throughout the Roman Empire and beyond with this contextualized gospel. The result was the most dramatic movement to faith in the history of Christianity!

May God bring about similar movements among all the peoples of the earth. May we be granted the wisdom to accelerate, rather than inhibit, these movements.

Bob Goodmann is a strategist and traveling catalyst working to accelerate the spread of the gospel among Muslims. He can be reached at .(JavaScript must be enabled to view this email address).