A Church Planting Movement in Cuba?

Among the movements we have witnessed around the world in the latter half of the twentieth-century, none is more dynamic than the one that nearly escaped our attention in our own American backyard. For 20 years Protestant churches in Communist Cuba have been multiplying at an unprecedented pace. The movement or movements bear significance, in part, because they break many precedents.

While the Cuban movements conform to universal characteristics that we have come to associate with CPMs throughout the world1 their distinctives are found in the socio-political environment in which they have emerged. Unlike many of the movements we are monitoring around the world, Cuba’s population enjoys a life expectancy rate of nearly 79 years and boasts a literacy rate approaching 100%.2 By all measures Cuba is a modern developed Western society, albeit an impoverished one. Despite isolation from the U.S., Cuban society is engaged with the broader modern and post-modern culture of Western nations.  Church-planting movements have been all too rare in this type of setting.

Factors such as socialized education, economy and health care that have so eroded the role of the church in Western Europe have done nothing to diminish the spread of the gospel in contemporary Cuba. The church planting movement in Cuba is by no means perfect, but given their vitality perhaps their experience holds lessons and insights that can be instructive for other Western nations that face an increasingly hostile and secular future.
What follows is an excerpt from the “Mission of God in Cuba” authored by Dr. Kurt Nelson, president of East-West Ministries, and Dr. Bob Garrett, missions professor at Dallas Baptist University. Their chapter will appear in the forthcoming book: Discovering the Mission of God, edited by Columbia International University missions professor, Dr. Michael Barnett.

“The most dramatic church growth in all of Latin America in the 1990s occurred among the Protestant churches of Cuba. The human agency for this Protestant revival may have unwittingly been Communist Cuban government leaders at the highest level.3  When evangelical church leaders approached the Office of Religious Affairs in the early 1990s, the Castro dictatorship authorized the believers to conduct meetings in their homes since they could no longer fit in their authorized buildings and the crisis in gasoline importation curtailed all but essential travel.4  This government directive resulted in an estimated 10,000 house churches springing up throughout Cuba over the next ten years.5

The growth of Protestant churches in Cuba began in 1990 and was evidenced across denominational lines. Between 1990 and 1994, Methodist church membership increased almost 50 percent, while overall attendance increased over 400 percent.6 The Nazarene church in Cuba grew 115 percent between 1991 and 1992, adding 18 new churches and 61 new house churches.7 A local Alliance church grew from 6 to 140 members in 1996.8 The Western Baptist Convention described the 1990s as “the one with the most growth in our history” accomplished “without strategy,” “without temples,” and “without equipment.”9

This massive response to Christ is estimated to have resulted in 10 percent of the Cuban population, over 1,000,000 people, becoming active evangelical believers during the last decade of the twentieth century.10 This represents a rate of unparalleled church growth in Cuban history. The Southern Baptist International Mission Board has identified at least two church-planting movements in Cuba during this decade. One is between the Eastern and Western Baptist Conventions, and the other is among the Assemblies of God churches in Cuba.11

These church-planting movements can be attributed to the shift towards house church meetings as a more reproducible method for harvesting the many interested seekers, coinciding with a dramatic increase in church growth, which “freed the church from physical limitations and thrust the gospel witness into the community.”12 Also, ironically a positive result of persecution in Cuba was that ‘persecution weeded out those who were not serious followers of Christ.’13 Operation World summarizes this spectacular growth of the evangelical churches in Cuba during the 1990s:

Evangelicals now outnumber church-going Catholics. The 1,250 evangelical congregations in 1990 has increased to possibly 4,500 congregations and a further 10,000 house groups in 54 denominations. A high proportion of the new Christians are young people.14 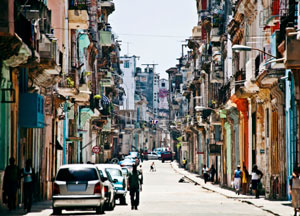 The new regulations, though unevenly applied in practice, restrict the locations, times, and frequency of house church meetings; forbid foreigners from attending these meetings; and require information on attendees to be provided. If complaints are filed against a house church meeting, the church can be disbanded and the members arrested and imprisoned.18

Other tactics include the destruction of church buildings, baseless accusations, arrests, interrogations, and imprisonment of church leaders and other forms of harassment and intimidation.19 In 2003, prison authorities in Camaguey, Cuba, banned the Bible from being distributed to prisoners.20 Family members (including children) of pastors continue to be harassed and intimidated.21

Despite continued Communist efforts to repress Christianity in Cuba, the Church continues to proliferate. Although comprehensive statistical reports are largely unavailable, indications are that since 2000 Protestant churches in Cuba are growing at an annual rate of over six percent.22 The 2006 annual report of the Western Baptist Convention indicates that the total ‘Baptist community’ (church attendance) has doubled between 2000 and 2006!23

Evangelical churches regularly engage in aggressive evangelism and outreach with prayer being foundational to their efforts. For example, one church used ‘Operation Andrew’ where each believer makes a list of ten friends and prays for them to become Christians, and then commits to invite them to church. The church implemented the program for one month, inviting all the friends to church on the fifth Sunday. So many new friends came to the church that morning that the pastor asked ALL of the members to get up and leave their seats to the newcomers. The church members went outside and lined up all around the external wall of the sanctuary, placed their hands on the wall, and prayed for their friends inside while the pastor explained the gospel. Scores came to faith that morning.

The incredible influx of seekers has meant that many new home Bible studies have been started. These are held in every imaginable venue:  a public garage, a flimsy tent lean-to, a living room with boards for benches, etc. Churches often fill to capacity with some now experimenting with multiple services.Churches are equipping ‘lay missionaries’ to become the leaders of these cell groups.”

Nelson and Garrett have much more to say about how God is at work in Cuba. Unfortunately, this is all that can be excerpted in this brief article. You may obtain a copy of the book (with the working title: On Mission With God) when it is published later this year. Clearly God is at work in Cuba, revealing what happens when the spiritual hunger of a godless society is met with an obedient church that is willing to pay the price to live and proclaim the gospel of Jesus Christ.

An excellent article and accurate - I have done 36 ministry trips to Cuba and continue.  But in the full version I wish the font were larger and the print were black and not grey.  Thanks.

dear sir kurt nelson presidet of east-west ministries.i am very happy see ur ministries doing well. please let me know in are planting chruchs in india, here in india people needly of chruch planting.i know so many villeges no churchs.