What I’ve Learned from 14 Urbanas

Editor’s Note: Steve Hoke first attended Urbana ’67 as a 17-year old freshman at Wheaton College. Since that convention of 5,000, he has only missed two conferences, and has attended in several different roles—staff photographer, exhibitor, missions leader and seminar facilitator. We asked Steve about his impressions and the most significant lessons he takes with him from his many Urbanas.

It’s not that it took me attending 14 Urbana conventions to get the point, or to be obedient to the Spirit’s call on my life. Rather, over these 46 years I have served in a series of missions-related roles as student, pastor, professor of missions, mission mobilizer, missions executive, and most recently as a missionary trainer and coach that has permitted me to be an active participant in so many memorable events. It has been a profound privilege. Let me sort my favorite impressions from my mental scrapbook into four major categories: biblical insights, people, shifts, and memories.

For 42 years I have treasured the sight and sound of Dr. John R. W. Stott calling out, arms widespread, in his distinctive British accent that so many of us remember, to recognize the dual demands of “The Promise and the Blessing” of Genesis 12:1-3. I first “caught” the truth of the Abrahamic Covenant, the heart of Lesson 1 in the Perspectives course, “live” at Urbana ’70. It was a life-changing paradigm shift for me, from a limited Great Commission understanding of mission to a fledgling but whole-Bible theological foundation.

At Urbana 1973, while furtively sneaking along the aisles of the U of IL Assembly Hall taking photos of the participants and proceedings as unobtrusively as I could, I was halted in my tracks when Dr. Edmund Clowney, speaking on “Our International Anthem” from Psalm 96, concluded his prophetic call to doxological mission with these words: “When we worship God as we ought, that’s when the nations will listen!” I was dumbstruck. For the first time, someone connected the dots for me between worship and mission. He was the first who ever showed me that worship and missions were inextricably linked.

At Urbana 1987 Ajith Fernando, director of Youth for Christ Sri Lanka, held the audience spellbound for four memorable Bible expositions on “Jonah the reluctant short-termer.” For over 46 years Urbana speakers have been my favorite Bible expositors, calling the North American church and successive student generations
to discover that “Our God is a missionary God, and the Bible is a missionary book.”
I heard it first at Urbana!

I have heard, seen, met and interacted with some of the most noted and gifted “world Christians” at the many Urbana conventions I have attended. That opportunity was available to every student who attended! It was like walking through God’s Missions Hall of Fame. Let me cite the range of those the Spirit has used as mentors and tutors in my own missions walk—George Verwer, John R. W. Stott, John Alexander, David Howard, Gregorio Landero, Billy Graham, Paul Little, Tom Skinner, Elisabeth Elliot, Jim MacLeish, Helen Roseveare, Jeannette Yap, Becky Pippert, Ken Fong, Miriam Adeney, Ajith Fernando, Paul Borthwick, Sondra Van Opstal, John Piper, Ramez and Becky Atallah, and David Platt, to name but a few. In addition to them, I came face-to-face with literally thousands of missionaries and mission reps who have brought the world to my Urbana doorstep. Their lives and stories of God’s unfailing love and faithfulness have been life-shaping for me.

Urbana for me was never about meeting famous people, but hearing from God’s gifted messengers. Urbana provided an incredibly rich smorgasbord over 46 years of the best and latest biblical inspiration, instruction and worship. The assembly and exhibition halls became vision-stretching venues for global networking and meeting contemporary missionary heroes. Every question I would take to a conference was answered in interaction with the missionaries God brought to speak to me.

Secondarily, those people brought a rich diet of cutting-edge messages and seminars across the range of contemporary missions practice, from “Affirming the Will of God,” “Out of the Salt-Shaker” personal evangelism, women in missions, worship and missions, Church-Planting Movements, to the task remaining. Some of the most significant lessons and insights I have learned from God in mission I learned at Urbana conferences. From small group Bible studies to plenary sessions with over 20,000, Urbana has provided space for the Spirit to show up and be my teacher.

I gleaned one of my most profound insights at a 1973 seminar with Elisabeth Elliot. Over 500 students were jammed into a classroom to hear Elisabeth speak. In response to a student’s question about the value of a college education or a particular major, Elisabeth simply said: “Never let your education stand in the way of the will of God.” I have used that gem of wisdom dozens of times since then in my own advising of missionary candidates.

Urbana programs have reflected many of the major shifts in missions practice over the years. In 1967 Billy Graham represented crusade evangelism, and an Evangelism-
In-Depth workshop spotlighted a rapidly spreading mission innovation emerging in Latin America. The Urbana audience was probably 90% Caucasian at that conference, yet in December 2012 it was over 43% multi-ethic, reflecting the huge increase in the number of Asian-Americans who have flocked to the convention since 2000. This multi-ethnic diversity has been a hard-sought goal of InterVarsity, and reflects the changing face of global missions over the last 30 years—the emergence of the Majority World church and missions movement. During my years of attendance we have witnessed the sea-change of missionary sending shifting from the North and West to the Majority World of the South and East. 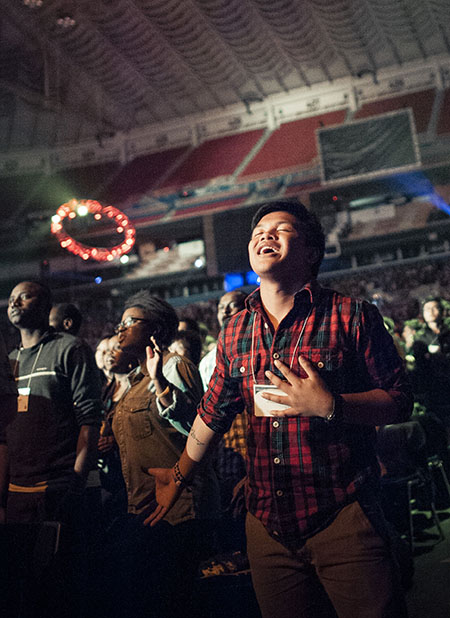 Another highly visible trend has been the continuing shift in worship from the song-leader-led hymn singing of the 60s, to the introduction of multi-ethnic worship bands starting in the 70s. The changing band composition has framed the continuing changing genre of worship music from hymns to contemporary worship songs. In the last two conventions, the multi-ethnic, multi-media plenary sessions have been orchestrated by the gifted worship director, IV staffer Sondra Van Opstal, who has creatively blended sound and light, drama, interpretive and tap dance, media vignettes and humor, staff testimonies of campus evangelism as well as summer short-term teams.

In every decade there has been fresh impact in the familiar areas of worship, instruction and inspiration on a massive scale, produced creatively and with excellence for a very critical student audience. While mission agency participants have not always adapted easily to changes in media or music style, all have been appreciative of InterVarsity’s commitment to present the biblical call to cross-cultural mission in a culturally appropriate and creative manner.

Not to mention the incredible and constantly expanding contribution of the authors and resources of IVPress would be a huge oversight. IVPress has continued to publish the very best of thoughtful, biblical and mission-oriented Christian books and curriculum. That is another immense contribution to the global missions movement.

Being front-row at 14 masterfully orchestrated missions pep rallies of “apostolic proportion,” and having been privy to that many scenes of private and corporate surrender and commitment has kept my heart soft and shaped my perspective on God’s foreign policy. As a freshman I remember how my spine tingled when I saw hundreds of students stand around me in commitment to Christ. As a grad student I remember the awe of the crowd when they responded to the call given by Dr. Billy Graham. I have sat among hundreds of students as they prayed, wept and responded to hearing God’s voice to them in seminar and plenary sessions. I have been swept up in the wonder of multi-cultural, multi-media worship that resounded with the music of heaven. I have prayed in the New Year at 13 midnight Communion services, and been moved to tears while singing “We Rest On Thee” or the IV hymn classic, “I Cannot Tell.” Singing “Great is Thy Faithfulness” with 15,000 was my first foretaste of heavenly worship. I have been both challenged and encouraged by four generations of students, missionaries and speakers whom the Spirit has used to keep my life laser-focused on Christ and His kingdom.

Since my birthday is on December 31st, I have spent 13 birthdays at Urbana. My wife has asked me for 40 years just why I want to leave home and family celebration the day after Christmas, travel to the frigid heartland of America, to walk concrete halls along with thousands of students I don’t know, to sit in hard plastic seats in a drafty assembly hall, and eat fast-food meals for four days rather than sitting at home enjoying my birthday with family and friends.

On Sunday afternoon, December 30, 2012, while facilitating two seminars and answering questions for an hour with sincerely seeking students, I realized my answer. I love Urbana because, for me and tens of thousands, it has become a “thin place”—a place where the Spirit of God shows up and manifests his presence in silence, in solitude, in worship, in seminars, in Bible Study groups and in interpersonal relationships. Hearts are softened. Minds are enlightened. Lives are enlivened to God’s call to missions. It is one of the most significant “spaces for God” the Spirit has used in my life to hear his voice and to respond in “a long obedience in the same direction.”

I guess I keep returning because I want to be a part of Urbana being that for the next student generation. I may have once thought that Urbana was about me and what I brought to the conference—my workshop, my book, my wisdom. It’s taken a few years to realize that Urbana is actually all about how the Holy Spirit shows up in the lives of the students. It’s one of the great places in my lifetime where the Lord of the Harvest consistently shows up to raise up laborers for the harvest. It is an awesome scene.

Steve became a life-long worshipper while growing up as a missionary kid in Tokyo, Japan. He now serves in leader development and as a strategic life coach with Church Resource Ministries (CRM), helping mobilize, train and encourage mission teams for global ministry. He is co-author with Bill Taylor of the Global Mission Handbook: Your Guide to Crosscultural Service (IVPress, 2009). You may contact Steve at: .(JavaScript must be enabled to view this email address).