The Remaining Peoples with no Chance to Hear about Jesus

In 1974, while preparing his speech for the first Lausanne Congress on World Evangelization, Dr. Ralph Winter realized that thousands of people groups were being completely overlooked by mission agencies and churches around the world. Due to the great success of outreach in places like Korea, sub-Saharan Africa, and island and jungle tribes, some were in fact insisting that missionaries were no longer needed. Others were insisting that missionaries should only partner with and serve the national churches, assuming that national churches were everywhere.

At Lausanne, Ralph Winter explained that an estimated 17,000 people groups had no churches of their own, and never yet had a missionary work among their people group. Winter expected the mission world to be as shocked as he was. Instead agencies responded with disbelief and even resistance, and churches showed no understanding. this awareness had changed Winter, but he realized that churches and agencies would continue to overlook these “hidden” people groups unless they were impressed with the same knowledge. So, Winter resigned from the School of World Mission at Fuller theological Seminary and dedicated the rest of his life to clarifying and mobilizing for what he called the “frontier mission” task: going where no missionary has gone before.

Forty years ago, in 1978, Ralph Winter put his statistics into a pie chart titled Penetrating the Last Frontiers, and Roberta wrote the story of the cause in I Will Do a New Thing (originally published as Once More Around Jericho). the purpose of this chart (shown later) was to clarify which people in the world had no chance of learning about Jesus from someone in their own people group.

He divided the world into areas by population. Each pie section shows how far the gospel has penetrated in that area of the world by showing which people are “Active Christians” able to share the gospel with others, and those that still need to hear. Some of the lost are nominal Christians or non-believers able to hear the gospel from the believers in their own culture. But other “culturally- distant” non-believers are beyond the evangelistic outreach of existing believers, because they live in people groups with very different languages, cultures and identity. (See the Key to the colors.)

As tens of thousands of people clearly understood the problem, they pressured their churches and mission agencies for new efforts to these overlooked people groups. Some decided to go themselves, and even founded new agencies for this purpose. Eventually, a great global effort developed to tabulate and reach every Unreached People Group (UPG).

Look at the following charts which include the original and then update the pie chart to 2018. The good news is that amazing progress has been made in many areas, especially in China. Movements have also been started in many people groups still considered UPGs because they have not yet passed 2% Evangelical. The bad news is that NO discernible progress is being made in well over half of the UPGs. Why? As Winter discovered, people don’t go until the task is clear. 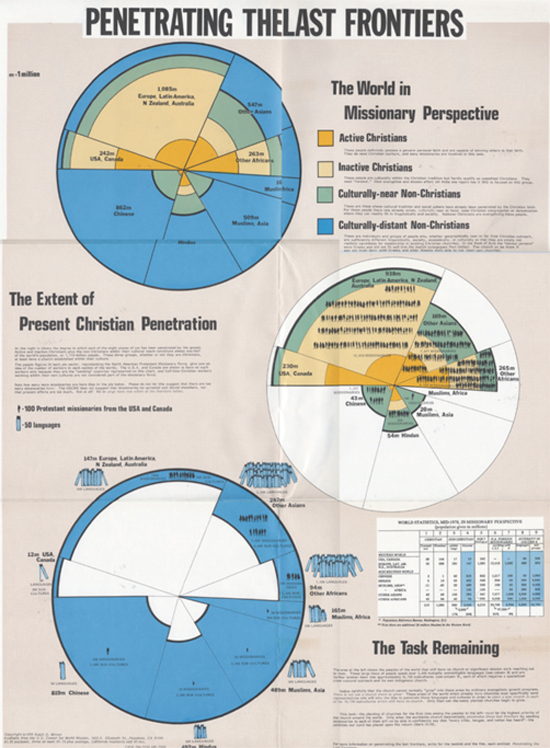 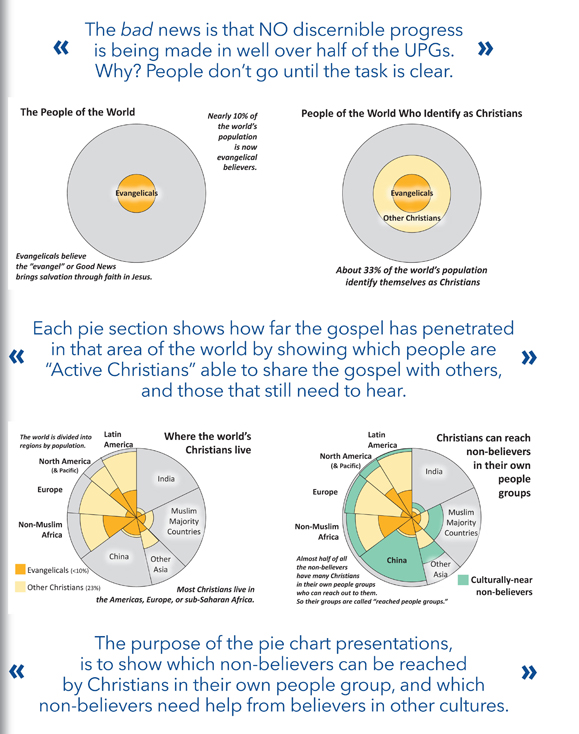 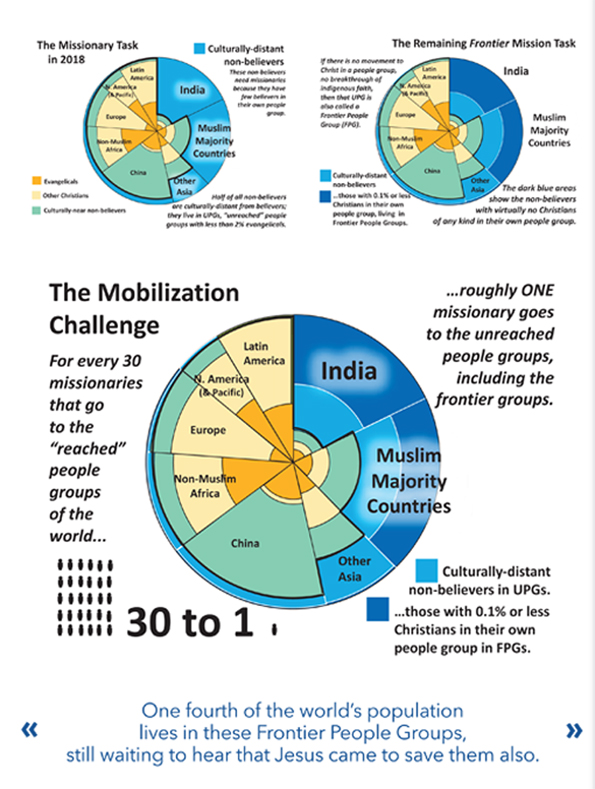 Notice on the updated pie charts, almost half of all the non-believers can now be reached by Evangelicals in their own people group! More than half of the population of non-believers in the world are still in Unreached People Groups, groups with less than 2% Evangelicals. But significant progress is being made in a number of these groups. If we separate out the non- believers that still have almost no believers among them, one fourth of the world’s population is left.

To highlight these most overlooked people groups, let us call them “Frontier People Groups” (FPGs)—people groups still requiring “frontier mission” efforts because no breakthrough or indigenous movement to Christ has happened yet. Many factors are obscuring the needs of these remaining people groups. I have detailed some of these in my Jan-Mar IJFM article Losing Sight of the Frontier Mission Task: What’s Gone Wrong with the Demographics? (IJFM 35:1).

One fourth of the world’s population lives in these Frontier People Groups, still waiting to hear that Jesus came to save them also. Some FPGs have had workers for decades, but with little progress. However, by some reports less than 1% of the global missionary force is going to FPGs.

Why so little progress in Frontier People Groups?

Some reasons are mostly out of our control:

FPGs tend to be isolated from gospel witness, in places difficult to access politically or geographically. (See page 22 which show that almost 3/4ths of the population of people in FPGs is in South Asia.)

Most FPGs are members of large religious blocs— like Islam, Hinduism, or Buddhism—that provide a global identity and view Christianity as an opposing religion allied with Western political powers. (See the “donuts” on page 22 that show that around 90% of the FPGs are either Muslim or Hindu.)

Many FPGs may be aware of and respect Jesus, but see Jesus as the savior of just the Christians, not of the whole world. they fear that putting their trust in Jesus                will bring shame and ostracism on their family and community Diaspora.

FPGs tend to stay in their homelands. Less than 3% of the total population of FPGs are in diaspora groups. And those who come to faith elsewhere may be shunned as traitors to their people group or become secret believers with respect to their families.

Other reasons for lack of progress among Frontier People Groups are under our control:

Efforts to mobilize for UPGs do not make clear which people groups are still waiting to hear about Jesus for the first time and which have strong movements underway or churches simply needing renewal.

5) Lack of clarity about  the Frontier Mission Task

Clarity has also been lost about how to prepare pioneer workers to start Jesus movements in groups untouched by the gospel. Especially in multi- cultural mega cities, “church planting” strategies have shifted from establishing the first community of believing families in a specific people group to starting Western-style (meeting- and program- based) churches that aggregate strangers from many people groups. these rarely result in movements. The shift from pioneering to partnership.

Wherever the Church is established, even if it is in just a small, westernized portion of the population, local believers seek partnership with global churches to help reach their own people group. As a result, churches often bypass agencies and partner with believers in UPGs as a popular church-to-church “mission” strategy. However, such partnership strategies automatically direct mission workers to people groups with believers and churches, and away from FPGs.

6) The shift from long- to short-term workers

Mission dollars and interest have shifted from long-term workers to short-term teams, which rarely learn the local language well or go to people groups or areas where there are no Christians. Short-term trips have risen exponentially since 2000, but very few participants return to work long- term among FPGs. Even “career” missionaries today rarely stay more than 5–10 years. This is hardly long enough to effectively establish work among FPGs.

7) The shift from implanting the gospel to extracting believers

In most of mission history, missionaries have sought to learn the language of a people group and clearly communicate the gospel to them so that families among them come to faith. New believers in tribal areas have not been removed to other Christian tribal groups—no matter how evil the tribe, even if some were martyred. But when faced with people living in people groups that are modern or aligned with global religions, believers are often encouraged to flee their families and persecution and join another people group that is already Christian. The result is that no progress of the gospel is made among the original people group. The gospel is not implanted; instead, the believers are extracted.

The purpose of the pie chart presentations, like the chart called Penetrating the Last Frontiers, is to show which non-believers can be reached by Christians in their own people group, and which non-believers need help from believers in other cultures. The non-believers in the blue areas need witnesses to come to them from other people groups. The darker blue areas on the 2018 charts are the non-believers in Frontier People Groups, where there are less than 0.1% indigenous Christians and no known movement to Christ. These are the areas that need the most help. To identify these Frontier People Groups clearly, Joshua Project has produced a number of maps and lists, with profiles for each people group. Some of these can be seen on the following pages. To download the 2018 Pie Charts for use in your churches and groups, go to www.missionfrontiers.org. Also available on this site is a narrated version of the pie chart presentation.

Making progress in Frontier People Groups will require both knowing who they are and returning to biblical and historical mission practice for implanting the gospel into people groups with few or no believers.

Rebecca Lewis has spent 40 years with her husband and family working to see the gift of God’s blessing for families reach the most overlooked peoples on earth.