for A Billion in the Largest Frontier People Groups

The Gospel has taken root in people groups comprising now 75% of the world's population. Overall, believers in those groups are multiplying faster than the population growth.

Are we close to filling the gaps—the 25% of the world (2 billion people) still living in Frontier People Groups (FPGs), and the many places (regions and villages) where no believing families are yet modeling and multiplying the Gospel?
Ten Remarkable Developments
Events of the past 200 years suggest we are much closer to discipling all “nations” (ethne, or people groups) than most believers realize.

Key to what is unfolding are a number of major paradigm shifts: 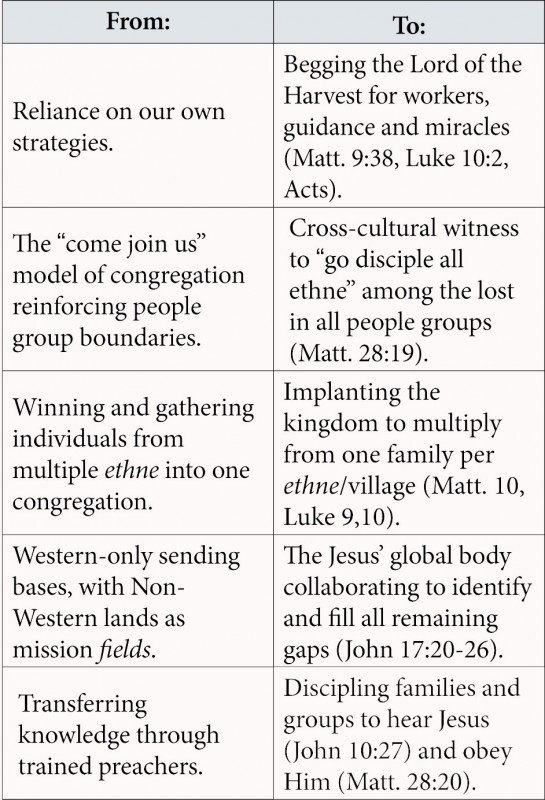 
The looming realities of our world tempt  us to lose heart over the state of the world and of global Christianity, just as Elijah lost heart and cried out to the Lord:

The Israelites have rejected your covenant, torn down your altars, and put your prophets to death with the sword. I am the only one left, and  now they are  trying to kill me too  (1 Kings 19:14).

Now, as then, the Lord may be quietly accomplishing much more than we can imagine: Yet I reserve seven thousand in Israel—all whose knees have not bowed down to Baal and whose mouths have not kissed him (1 Kings 19:18).

When the Gospel is present in families that love, listen to and follow Jesus, it often spreads rapidly as a movement to Jesus in same-culture witness. As Jesus’ global body prays and collaborates to implant the Gospel in lost families of every village of every ethne—including FPGs—we can anticipate the remaining gaps filling quickly.

Prayer is foundational for workers to be sent, and for the Gospel to be implanted in families among every FPG, leading to further multiplication of movements to Jesus.

The fully updated third edition of THE THIRTY- ONE prayer guide is a great starting point for believers around the world to become involved in filling the gaps. Order or download from Go31.org (or download the app from BlessFrontierPeoples. org), then join others at GetInvolved.com in praying from this guide.