This is an article from the November-December 2014 issue: The Fingerprints of God in Buddhism

The Fingerprints of God in Buddhism

Could a New Approach to the Way We Look at Buddhism be a Key to Breakthrough?

Typically Christians attempt to understand Buddhism1 by trying to compare it with biblical doctrine. We quickly come to the conclusion that Buddhism is quite different from Christian beliefs. We believe in God, Buddhists do not. We believe in a savior, they have to rely on self-effort. This line of reasoning can develop until we are solidly convinced that there could not be any two belief systems further apart from each other than Buddhism is from biblical Christianity. And because we know we are in the light, they therefore must be in the darkness, from which we have to rescue them by proclaiming the gospel. And by gospel I mean our understanding of the gospel, because to a Buddhist our good news does not sound like good news. The biblical doctrine seems so far removed from their concepts that rarely does any understanding occur, even after 200 years of Protestant mission efforts. The only way for a Buddhist to believe what we believe is to reject everything “Buddhist”2 and jump camp.

Do we actually believe what Paul wrote that God’s “eternal power and divine nature— have been clearly seen” (Rom 1:20, NIV)? How does this apply to Buddhism? Can we find eternal and divine fingerprints in Buddhism? Instead of dismissing everything Buddhist as untruth, let us try the opposite, finding some truth within Buddhism. Such a new approach might actually hold the key to breakthroughs among Buddhists.

First, a few words of what we can not expect. We can not expect that Buddhists have a fully and completely developed concept of “God.” Neither can we expect that a savior concept exists in the sense of a savior who overcame death to make a deathless life possible for all of creation. Even the Jews who had all the revelations of God in their Scriptures weren’t able to identify Jesus as the Savior of the world. Both concepts-- of God and of a savior--are part of the good news.

Let us believe that God gave some profound wisdom and understanding of godly truth to Buddhists, then build on that foundation laid by God himself and see what will happen!

For a Christian to dive into anything Buddhist leads to much confusion early on. An easy way to declutter our understanding is to study how Buddha saw reality.

The Buddhist world is basically divided into two spheres with unique and opposite attributes. 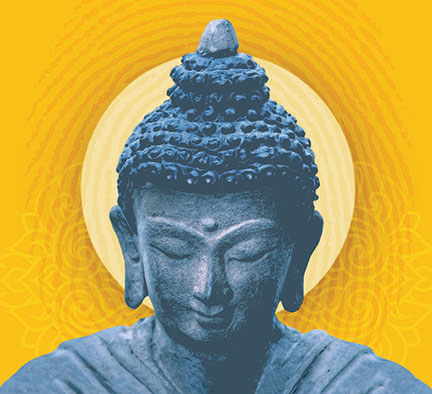 In short, all that is absent in nibbana is present in kamma, and it makes our lives miserable.

Life in the Buddhist understanding is strictly defined as life under kamma. It is a life that is under death. Buddhists do not have a concept for life without death. It is like a fish without water, while the fish is living for a short while on the dry table (after hopping out of the glass), his life is full of suffering and will surely lead to death quickly. If he would be in water, he would actually live. This is one reason why Buddhists are not very appreciative of being told about “eternal life” as for them it means this miserable life on earth, experiencing suffering and death again and again without any escape eternally. That is bad news, the worst imaginable. What we want to find words for is the biblical concept of “life without death.”

The concept of kamma always includes the ideas of reincarnation or rebirth.5 The reasons are that humans have to experience some kind of result for what they do. They cause something to happen and this has to have an effect, which in a certain way is simply how we experience life. We see people doing good and good comes back to them or people doing evil and bad things come to them. We also experience, however, that bad things happen to good people and good things to bad people. While there seems to be some kind of “justice” going on, it clearly does not all happen in this life. Therefore if we do not experience all the good effects in this life and there are some effects “left over,” the only way to experience them is in another life. Unless of course we get out of kamma into nibbana. Justice from God is absent simply because God is absent in their worldview. Kamma is a concept which includes the absence of God while it preserves some kind of justice concept, although Buddhists would not use that term because justice implies the idea of another being administering this justice.

Buddha taught the Four Noble Truths. Here are some possibilities of understanding them from the perspective of a shared foundation:

Much more can be said about this. Some readers may feel uneasy as the above sounds like mixing Buddhism and biblical truth. Finding the fingerprints of God within Buddhism is like putting an engine into a car that does not have an engine; it is putting God into a belief system called Buddhism. To extend this analogy, a car is a car even if there is no engine inside. When someone puts an engine into a car it does not become a tractor. In the same way Buddhism stays Buddhism with or without God. What Buddhists are talking about is a world without God. Will it also make sense if we put God inside of it? Yes, it will, if we connect the different pieces of the engine to the right pieces of the car. We need to get an understanding of what Buddhism really is. To continue the analogy, it is like a car that waits for the engine to be put in and all the pieces properly connected. We do not need to approach Buddhists with the attitude “I’m a tractor, you are a car; I have an engine, you don’t. In order to get anywhere you have to become like me, a tractor with an engine.” We just need to bring them the good news: There is an engine and it makes you drive. There is a path to God and it is Jesus, and He will get you to nibbana, to deathlessness. 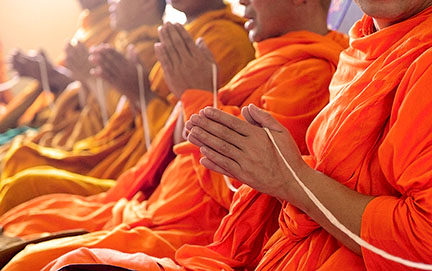 All concepts in Buddhism are not fleshed out with God in mind, but they can be. In other words we are adding meaning to Buddhist concepts without taking pre-existing meaning away.

When this happens, Buddhists can understand what we mean based on their previous knowledge of truth. They see how Buddha’s teachings were like a masterful preparation for the good news of Christ. They do not have to become non-Buddhists (i.e. a tractor) in order to believe in Christ and trust God. Before, they only had to depend on themselves because they did not know Christ and were stuck in kamma. There was no reliable source to depend on. None of the Hindu gods worked out for Buddha. Neither can anyone rescue someone else while being stuck in the same mud (kamma). They can depend on Christ as Buddhists precisely because Christ was always enlightened.11 Here is the climax of the analogy. Buddhists, as cars without an engine, believed that they had to depend on themselves, but now they can depend on the engine that fits into their cars. They can depend on Christ. This is the good news.

Many Buddhist concepts are so biblical that it is possible to think they are straight from the Bible.

Metta is unclinging love, pure kindness, absolute benevolence with no hint of any selfishness involved. Metta is basically what the Greeks called agape. Unfortunately, there are still Bible translations out there that use a desire-clinging love word, putting the love of God straight back into the realm of kamma.

While metta and nibbana make God personal, the word that makes God divine is nicca, permanence. Kamma, and all conditioned phenomena, are characterized by impermanence, anicca. Nibbana is not conditioned and thereby permanent. This permanence is what Buddhists see as ultimate, while according to biblical truth God is ultimate. The reason why Buddha did not talk about a “personal” ultimate is because there was no person existing who was unconditioned and permanent and Hindu gods were either impermanent and personal or impersonal. An impersonal godhead would not make any difference to human suffering. The end of human suffering is what Buddha was concerned about.

Further exploring the fingerprints of God within Buddhism might lead to more breakthroughs among Buddhists as they find the permanent God who has brought nibbana to them, experiencing His metta and transforming their lives. If space would allow we could find dozens of examples of Buddhist concepts that could be employed to communicate the good news.

Once we understand Buddhism better, how it highlights the truth, we see God at work everywhere. He prepared a path to walk on. We don’t need to fight Buddhists for “wrong beliefs,” engaging in defensive apologetics because we feel threatened by their beliefs. We can explore new ways of engaging with our Buddhists friends, because God’s fingerprints do exist in Buddhism.

Chris lived and worked in Asian countries as a strategy coordinator and church planter for ten years. As he experienced difficulties due to different worldviews, it raised the question “How can Asians truly understand the good news without becoming a Western Christian?” Chris has spent the last several years exploring what it would look like to follow Christ in a Buddhist context. Chris now works at the US Center for World Mission.