A Story From India

It was an ordinary day like any other and I was on my way to our office on a cycle rickshaw in the morning. Midway I started to feel a sense of deep heaviness in my heart like carrying a big weight. It was quite unusual, so I started to pray to understand what it was all about. The Lord showed me a vision, a picture of our land soaked with blood. I kept on praying to ask the Lord whose blood it was and the answer that I received was that it was the blood of the innocent girls in our land who were killed before they were born.  The Lord was planting in my heart his own concern about the plight of girls in our country whose lives were snuffed out because they happened to be girls. This happened about 12 years ago but the memory of that experience is still vivid in my mind.  As I reached the office I shared this vision with our team members and we prayed together to find more clarity.

As we continued to pray for some time the Lord reminded us of a verse from 2 Chronicles 7:14, “…if my people, who are called by my name, will humble themselves and pray and seek my face and turn from their wicked ways, then will I hear from heaven and will forgive their sin and will heal their land.” We recognized that the Lord was bringing to our attention one of the “wicked ways” of our time – the practice of sex selective abortions, also known as “gendercide” or “female feticide” in our country. We realized that the Lord required us to take ownership of this social problem and seek His forgiveness if we wanted to see His healing come to our land.

We started to pray more intently seeking His guidance and to learn more about this issue as it was new for us. In the following months the Lord confirmed to us this call in different ways. We started to learn more and began sharing the concern in our training programs. One significant event organized was an Artists’ Residency program on the theme of “female feticide” in collaboration with one of our sister organizations. Art works produced in that residency program were exhibited under the title “The Disappeared” in an art gallery. That was our first public engagement on this issue. Since then we have continued our engagement with this concern and it has, in fact, become one of the primary focuses of our ministry. 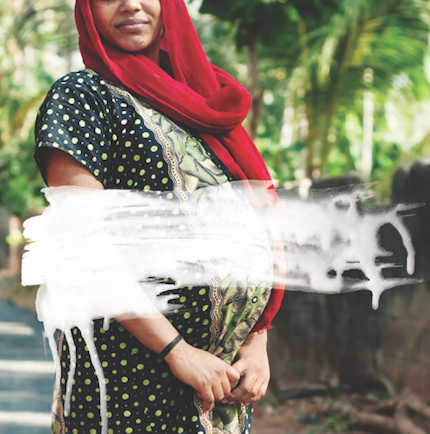 The gravity of the problem due to sex selection has been highlighted by various demographers. Christophe Guilmoto, a French demographer, calls it “rampant demographic masculinization, a change with potentially grave effect for future generations.” Dr. Puneet Bedi, a practicing gynecologist in a famous hospital in New Delhi, says that it is “probably the single most important issue in the next 50 years that this country and China are going to face.”

The issue of sex selection or gendercide is linked to the unequal status of women in our society. The culture of “son preference” and “daughter avoidance” stems from the belief of superiority of men over women. This belief is at the root of various forms of violence against women such as female infanticide, dowry deaths, honor killing, rape, domestic violence, acid attacks, etc.  Discrimination and neglect have resulted in a skewed sex ratio, trafficking of women, purchase of brides, and increased incidents of crime against women.  The church in India can play a significant role in stopping this tide of violence by sharing a gospel message that accords equal value to women for being created in God’s image and redeemed by Christ to become co-heirs of God’s kingdom. This indeed would have been “good news” to millions of “missing women” in our country, but sadly the church has largely failed to proclaim and demonstrate this good news.

For the global church it also raises an important concern. In the book of Exodus chapter 1 we find an account where the king of Egypt had ordered Hebrew midwives to kill all the boys born to the Hebrew women, but let the girls live. The Egyptians were afraid of the growing population of Hebrew slaves. It was also a form of sex selective killing. But the midwives feared God and did not do what the king had asked them to do. It is written that because the midwives feared God, he gave them families of their own ( Exodus 1:21). The current trend of sex selective abortions can be traced back to policies framed and implemented to curb the rising population in Third World countries. These policies were aggressively promoted and financed by the World Bank and other international funding agencies who were alarmed by the projections made by Paul Ehrlich in his book The Population Bomb and had approved of sex selection as a means to curb rising population. When such policies are promoted by governments or multilateral agencies which are clearly in contravention to the commands of God, the global church can draw inspiration from the Hebrew midwives and their choice to do the will of God rather than that of men.

The power of the gospel to break the racial barriers of “Jew and Greek” could be evidenced in the first century but it took more than eighteen centuries to break the barrier of “slave and free.” How many more centuries will we need to break the barrier of “male and female” mentioned by Paul in Galatians 3:28? The need is urgent to both proclaim and demonstrate the gospel that reinstates the equality and dignity of women as part of the message of redemption and reconciliation in Christ Jesus. The urgency of the need is well highlighted by New York Times journalists Nicholas D. Kristof and Sheryl WuDunn in their book Half the Sky:

“The global statistics on the abuse of girls are numbing. It appears that more girls have been killed in the last fifty years, precisely because they were girls, than men were killed in all the battles of the twentieth century.

In the nineteenth century, the central moral challenge was slavery. In the twentieth century, it was the battle against totalitarianism. We believe that in this century the paramount challenge will be the struggle for gender equality around the world.”

With the objective to ensure equality and dignity of women and girls in our nation, we have been running a campaign named “Let her live.” We conduct awareness events among college students to sensitize them on the issue of gendercide. Dowry pops up as an important factor behind the practice of sex selection in most of our discussion with students. More than 1,500 students have so far signed a pledge to not take or give dowry and not to go for sex determination tests. Many of those students also enlist themselves as volunteers for various awareness raising events. In the last few years, the student volunteers have visited hospitals on the International Day of the Girl Child to give gifts to the new-born girls. It is a small gesture to celebrate and welcome the births of daughters. Our vision is that those students will become passionate advocates of the cause.  We are also sharing those ideas with churches and encouraging the churches to organize such events in the community. Some churches organized street rallies and street theater to share the message. We have been sharing prayer cards, prayer guides, and posters with churches to observe the International Day of the Girl Child. We facilitate a training program for churches on ending domestic violence through the formation of care groups. We need to work not only on the issue of sex selection or violence against women but also on the larger issue of value accorded to women in our society and in the Church.

As Christians, we have to bring in the inherent value of human beings and make it a moral campaign. We hope that the churches start taking initiatives in the community that will communicate the value and dignity of girls and women. When they start getting equal opportunities to exercise their gifts in the church, when they face no discrimination in their homes, schools, colleges and work places and when they are able to achieve their God-given potential without any hindrances or barriers, we will know that the birth of girls is no longer being viewed as a burden but is being welcomed and celebrated. This hope inspires us and fuels our work.

Raaj Mondol is a training facilitator and is engaged in raising awareness on the issue of gendercide among university students. He leads a small team in sensitizing churches on domestic violence. He lives with his wife and two sons in New Delhi.