One day while doing our daily market run in India, my young daughter started to play with the washer woman’s children. I watched the woman, trying to talk with her, but her work was unending. I took a moment with Jesus to see through His eyes the invisible walls that separate her and her people from the Gospel.
The Dhobi wash and press clothes all over India and throughout South Asia. Every day they serve almost every caste in South Asia. Every Christian worker in South Asia interacts with a Dohobi in the local trade language. The Dhobi are not a people group out of reach in some remote location unable to hear and see believers as they live.
Why is there no known movement to Christ among over 12 million Dhobi?
Perhaps because no one has been sent to them.
How will they hear … if no one is sent?   (Rom. 10: 14–15)

The world’s archeological sites make a profound statement about humanity. They all feature walls, weapons, and religious artifacts—revealing an inescapable reality of the nature of man, a fallen version of His design that God seeks to redeem and call His own. As image bearers of God we create things of value. Yet, in our fallen world anything of value must be protected by walls, weapons and the blessing of a higher power. This “need to protect" shapes how tribes or nation states are made or unmade, who will go to war with whom, who controls resources, how wealth forms, how technology advances, how disease travels and even the spread of God’s kingdom and the Gospel.
Recognizing the reality of boundaries and accurately seeing them in today’s world gives us the ability to see hidden peoples and even ask questions leading to a missiological breakthrough, such as: “Why is there no known movement to Christ among the Dhobi people group of India?”

The Gospel has taken root and borne fruit in many of India’s people groups—especially tribal groups that are geographically concentrated. Some movements to Christ involve multiple people groups showing that the people group identity is not always a barrier to the work of God.
However, people groups like the Dhobi can also  be left out of a movement, and then be assumed to have heard but not responded. The assumption that this group is unresponsive then becomes another boundary keeping this group from hearing of Jesus. These kinds of assumptions, while invisible, are just as real at shaping their access to the Gospel as the political boundaries of nation states.
The remaining task in India is immense, with very few workers in comparison to the needs defined  by population size. Outreach in India is rarely people group specific, often assuming a village or neighborhood is one people group.

Seeing boundaries accurately creates the ability to understand and predict the direction things are flowing in the world and provides deeper insight for building relationships that can bear the weight of truth. In modern times, the borders between nation states were the primary lens used to see where the Gospel has been shared and to define priorities and encourage sacrifices to enter new lands.
This effort to send witnesses to every country in the world has been wildly successful—every country in the world has a group of people who have heard the Gospel and responded in faith. Over the last 50 years the growth of believers in the world has outpaced the world’s population growth. Yet some countries still have huge people groups essentially untouched by the Gospel. It is risky to misjudge which groups are people groups and which groups are not. Ignoring invisible boundaries has real world consequences as whole people groups are left out, with no one being sent to them.

We aren’t alone in failing to consider how a people group’s identity shapes the course of their destiny. The best geopolitical intelligence agencies of our day underestimated the influence of the Ukrainian people group identity, and this oversight has had
real world consequences. Forgetting the genocidal atrocities the Ukrainians suffered under the Soviet Union, few predicted that they would fight to the death to prevent Russian dominance again.
The leadership shown by the people in Ukraine— and the depth and strengths of the “people group” identity that Ukrainians are willing to die for—has captured the imagination of many nations in a sense of awe and even a desire to give support. Many have been shocked that a country so intertwined with Russia—both on a family level and economically— could have a “national” identity so strong that it carries with it a call to arms and a call for help to the world.
This unfolding story reveals the double-edged sword of being made in God’s image, where a people create something of value that keeps them separate from their neighbors, where the visible and invisible walls when crossed create a call to arms, even when both sides share family members with their enemy.

We have too often ignored or underestimated the reality of people group identity. The Dhobi’s access to the Gospel—along with dozens of other groups spread-out all-over India—will remain extremely limited until they can be seen as a group that needs workers specifically sent to them. Until we see the world with “people group eyes” the Dhobi are very likely to wait far too long for the destiny that God has for them—to bless their families; and bless the world through them. The only way this happens is by the obedience of His people to see them and to go to them with the Gospel. 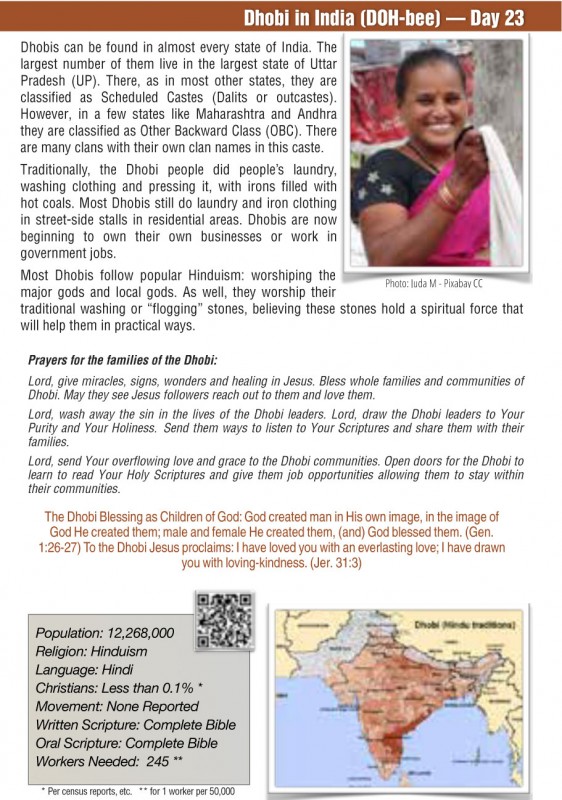 Christine Lewis has worked for 20 years with her husband and children to encourage Jesus followers to bless the most overlooked peoples on earth. Email: .(JavaScript must be enabled to view this email address).