People Group Lists and the Challenge of Growing Complexity

No comprehensive, global list of people groups existed when Dr. Ralph Winter gave his landmark presentation at Lausanne ’74. Partial lists began to be developed in the late 1970s and early 1980s. Since then, three global people group lists have emerged:

These three lists have different definitions, sources, purposes and audiences as outlined in the table below. 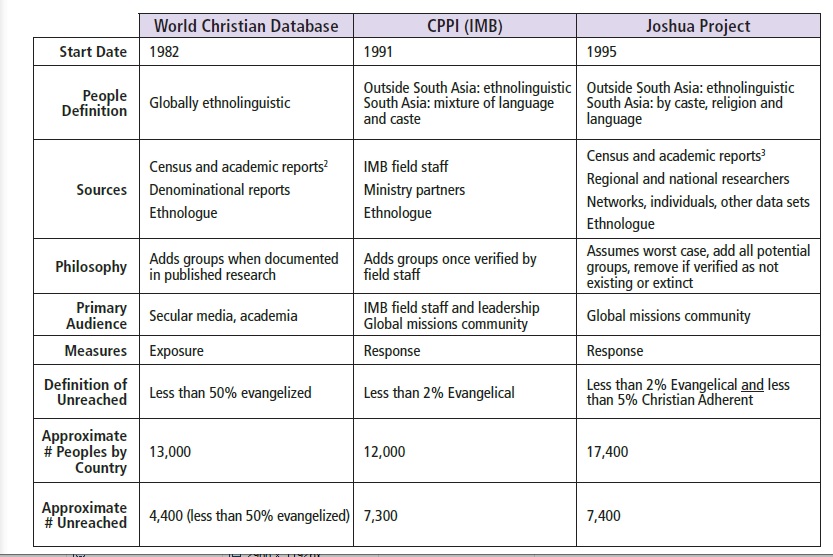 Looking at a picture from several angles often yields greater perspective. Using different definitions and criteria can help clarify a task and highlight areas needing further research. Global people group data compilers are confronted by questions such as: Is language always the primary definer of a people group? Should caste be considered when defining a people group? Should Christian adherents be considered when setting criteria for unreached? Should unreached be defined by exposure or response to the gospel? What are acceptable sources for input and edits?

A second, very different refinement being suggested is complete reconfiguring and mixing of traditional people groups into dynamic or hybrid identities. Distinctives of these hybrid groups might be by occupation, shared interests, skills, education, networks and/or social status. This represents a quantum leap in complexity.

Graph 1 illustrates the relationship between people group list granularity and complexity. The chart is divided into three sections. Very general uses are suggested for each section. The numbers in parentheses are counts from the Joshua Project list as of June 2021. Current numbers may be slightly different. Groups to the left of the dotted line would be considered traditional people groups and groups to the right would be considered dynamic, hybrid groupings or “unimax” peoples. 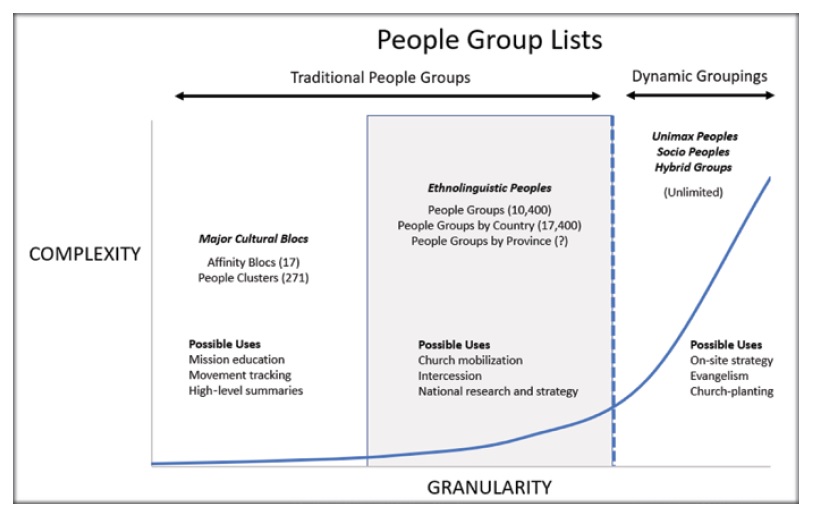 Consider the Fulani of Central Africa. Moving from left to right across Graph 1 on the previous page, the Fulani can be viewed as a single People Cluster4. This level does not distinguish specific Fulani people groups and combines 40 million individuals into one category. Typically, this is the level of granularity used by the secular media and general missions education material. To protect believers, movements to Jesus among the Fulani are reported at this broader level. However, a church adopting a people group for prayer and engagement needs greater detail and a smaller size group to focus on. The church would likely adopt a specific Fulani people group such as the Pulaar Fulani, in Senegal5. As workers begin on-site ministry, they might focus on the Toucouleur dialect- speaking, millennial age, healthcare professional Pulaar Fulani living in Matam, Senegal. This would be a hybrid grouping. The “glue” that holds such a hybrid group together goes well beyond ethnicity and language.

From a church-planting perspective, people group boundaries are defined by barriers to the spread of the gospel. The highest barriers define the extent of a people group. In some parts of the world, changing barriers are rapidly causing a shift from traditional people groups to dynamic or hybrid groupings. Table 2 compares these perspectives.

Existing people group identities are being mixed and recombined, and new hybrid identities are being created. For example, language consolidation is reducing the language barrier that traditionally has defined many people groups. Speakers of smaller languages are rapidly learning one or more global languages, usually for education and job opportunities. These are often languages widely used on the internet. New mobile devices are allowing on-the-fly, real-time translation. A rise in linguistic nationalism results in merger of people groups together through governmental pressure. At the same time, some people groups are dividing over a desire to preserve language and its cultural contexts. Few boundaries are truly rigid; the edges have fluidity.

Urbanization and migration are reducing ethnicity barriers. Groupings of individuals in cities are increasingly being driven by occupation, shared interests, skills, education, networks, social status and activities rather than by ethnic background or language. Globalization is reducing the ethnic as well as religious barriers. An inter- connected world allows exposure to and opportunity for exploring different worldviews, values and religions. Globalization allows connections and relationships with other likeminded individuals around the world, rather than only those in one’s immediate physical area.

These forces are changing the barriers to the spread of the gospel and impacting how the ethne of the world are defined from a church-planting perspective. Growing reports of movements to Jesus crossing traditional people group boundaries demonstrate a shift in how the gospel flows. For example, some have suggested that Gen-Z youth of Riyadh have more in common with their peers in Chicago than with their own parents. That might be an exaggeration but it makes a useful point. Youth in many cases are not identifying as strongly with their traditional people group, based on ethnicity and language, as they are with others in their age group and social experience almost anywhere in the world.

For on-site workers, other ways of grouping are becoming more useful and needed than groupings by ethnicity and language. For example, classifying Saudi Arabian Gen-Z youth in a database using traditional people group definitions could potentially obscure their preferred identity and limit reaching them with the gospel. Identifying Saudi Gen-Z youth as a unique dynamic grouping might accelerate the flow of the gospel along pathways of relationships and common interests.

Traditional people group lists are still important and useful but need periodic revisiting and evaluation in changing times. Lists help to outline the unfinished task of the Great Commission and provide church leaders and mobilizers with motivating benchmarks. At the same time, new perspectives and dynamics are bringing other groupings into focus. The “glue” that binds these new groupings together may not be language or ethnicity, but rather occupation, education, shared interests, social networks, generational issues and worldviews. These dynamic groupings will be increasingly strategic and effective pathways for the spread of the gospel. Both the traditional and dynamic perspectives of people groups are useful and should not be viewed as old vs. new, but rather as complementary.