“By the end of the month, you’ll be able to do something most pastors can’t do!” The auntie smiled at her club of forty orphans meeting outside a home in the foothills of the Himalayas. They were meeting three times a week for what the children called their “Jesus Fun Club.”

“You’ll be able to tell the whole big, exciting, amazing story of the Bible!”

This woman—and dozens of Christian workers like her—spent  the month of December 2011 in India, showing children that the Bible is not a book of unrelated stories. Instead, it’s one beautiful story of a Heavenly Father’s love. During that Christmas month, over one thousand orphans in dozens of India’s eighteen thousand Christian orphanages learned that their Heavenly Father moved heaven and earth to prove his love for them.

The twelve lessons, given three a week for four weeks, followed a familiar pattern to people involved in the orality movement.

First, the auntie (a respectful title for the club leader) would tell or read the story. The big redemption story is part of David C. Cook’s Global Mission club project for orphans and other children at risk. The story began with the Creation, followed by the Fall, life outside the Garden, the great flood, Noah, Abraham, Moses, and David, and the parts they played in the redemption story. Then Jesus, our Redeemer, came. He lived, died, and rose again for us. Finally, the children learned the great, glorious end of the story: they would have a real home with their Father God forever.

After each day’s portion of the story, the children divided into pairs and told the story to each other. “You forgot the part about God’s promise to Noah,” Afreen grinned as she corrected her partner. “I think the rainbow is the prettiest part!”

At this point, the children had heard or told the story portion three times. Next, they discussed it. They were encouraged to think more deeply than simply giving fill-in-the-blank answers. In the segment about Noah, they answered these questions:

Each child had a personal story that brought him or her to the orphanage. Those stories were filled with pain and danger.

One child’s father hung his mother.

One girl’s mother had leprosy, and although the girl was healthy, she will always be viewed in her society as untouchable. She will only marry if she marries another healthy child of a leper.

Another child was HIV-positive, although he didn’t know it yet. His father was dead, and his mother dying.

A young teen was left by her mother with the promise that in a week she would return to the orphanage to bring her home. That was seven years ago. 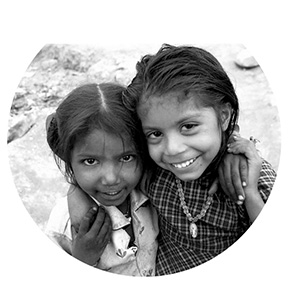 Their own stories made God’s special story of love precious to them. They learned the Bible’s promise that no matter how hard things are, these children will always have a Father God. They are not alone. “I used to want to kill my father because he killed my mother,” Preetham admitted. “Now, the big Bible story showed me that God forgave me. I won’t kill my father when I grow up. Instead I’ll find him, and tell him that God forgives him, and I do, too.”

After the children heard the story and discussed it, they read the story in their Action Bibles, a comic-book-style Bible that covers most of the stories in scripture. Using The Action Bible breaks with a strict orality pattern. Because most of these children will have a better future if they can master English, The Action Bible was used to help them learn the language. Their eyes moved back and forth from the words to the pictures, confirming what they heard and read, and enlarging their vocabulary.

The auntie was almost finished with the day’s part of the big Bible story. “I want you to tell today’s story to one other person before we meet again. It can be someone who is in this club, or it can be someone who isn’t here. Tell it over and over so you’ll never forget what your real Father has done for all his children.”

Ayesha came up to the auntie after the club ended. “I can tell the whole story perfectly,” she announced. “All the parts we’ve learned so far! Want to hear me?” Auntie knew she would miss her bus and have to wait an hour to catch the next one. She smiled and sat down. “I’d love to, Ayesha.” As Ayesha started to tell the most wonderful story ever told, the other children settled down close to the auntie and listened one more time.

Your words are very encouraging and full of hope to orphaned children. Thanks and praise to God our Father for using you brethren to accomplish His work. It seems you have a large number of orphanage. God bless you for your loving.

Marlene is Vice President of Educational Development for David C. Cook Global Mission. She developed the orality unit mentioned in this article. For a free copy and to receive updates on this orphan initiative, email her at .(JavaScript must be enabled to view this email address).