I was born in Lom, Bulgaria, a small, ancient town known as Almus during the Roman Empire. In Lom, like many places in Eastern Europe, there is a separation between where the Bulgarians live and the three Roma neighborhoods (mahalas).

I believe the town is very significant because it has more than a century of Evangelical history. The people of Lom claim that it was in this city that the first Roma Baptist Church in the world was registered in the early 1900’s. Because of this history, the Roma people in Lom are “breastfed” with the gospel and honor the Christian way of life. We begin going to church from a very early age because our mothers and grandmothers take us to church every Sunday. From every house in the Roma neighborhood, at least one person in the family, if not the whole family, visits a Sunday service.

Pentecostalism and Evangelicalism among the Roma in Bulgaria spread rapidly after 1989.  A 2008 study estimated that there were over 800 Roma churches and 600 Pentecostal preachers, deacons, and elders. Another estimate puts the number of Pentecostal churchgoers to be 50,000, not including those who identify as just Evangelical.[1]

In 2004, when I was 16, I became curious while watching all the people who would pass my house on the way to the biggest Roma Pentecostal Church in that part of Bulgaria, as it had 400 members. Pastor Ilia Georgiev, a man who taught himself to read using the Bible after his own conversion in 1979, founded this particular church and is still the pastor. In 1993, the people began to build the church with their own hands and money—a process that took 10 years to complete. Despite the deep economic crisis, the church is still supported only by its members. 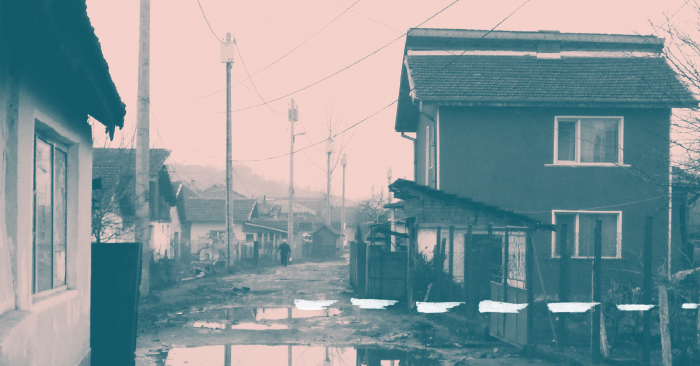 I went to the church, and immediately the other young people noticed me and became my friends—and that is how everything began for me. In 2005, I received Jesus as my Savior. Soon after that, I started to preach at the youth meetings. In 2006, I attended Bulgarian Presbyterian Reformed College in Sofia, Bulgaria’s capital city, for two-and-a-half.  I was also a translator in the church, so I was able to befriend many different preachers and men of God.

One of the biggest challenges for the people in the church is the socio-economic situation and the sub-standard education. In fact, our particular region is the poorest in the entire European Union. Lom’s Bulgarian population has a 50% unemployment rate, a percentage that is even larger among the Roma population. Those who are able to find employment work in the private sector or in a temporary contract paying only 215 Euros ($230) a month. Therefore, for a family to survive in Lom, at least one member of the family needs to work outside of Bulgaria.

In 2007, Bulgaria was accepted into the European Union, and people slowly started to leave to find work. Now in Lom, there are an estimated 7-8,000 Roma left out of 15-17,000 people who used to live there. The Roma mahalas have become like ghost towns—the streets used to be filled with noisy kids playing, but now most of the people who remain are over 50 years old.[2]

In Bulgaria, the Roma are known as people who do not pay taxes, electricity or water bills. They are thought to be lazy and “live on the backs of the working people.” However, the issues are much more complex than such a stereotyped generalization. It is not because the Roma do not want to pay for utilities, but because they cannot afford it. The money they receive is just enough for food and sometimes for clothes [and only for the kids]. In fact, Bulgaria cannot provide normal life for its people. A 2015 estimate claimed that 2.5 million Bulgarian-born citizens work outside the country, 55% are between 20 and 29.[3]

I see the complicated truth more clearly now because more than 100 Roma families from Lom, including my family, live in Germany, in and around Kaiserslautern. There are also others from other parts of Bulgaria: Vidin, Belingrad, and Shumen.  Here we pay taxes, rent, and electricity. It is interesting that the same uneducated and unqualified people that do not have work in Bulgaria find work and success in Germany.

I chose Germany because the country is stable and secure and has a good economy. When I along with others migrated here, we started from zero and began a whole new life. For most of the people, everything is unknown. Most do not know the language. Some of them have never left Bulgaria before so they encounter a lot of hardships—for example, wading through the complicated documents or looking for an apartment to rent.

However, through these difficulties we find success. How? We thank God that the Roma people help each other. Those who speak German help others to find a job or an apartment, or to borrow money. We are trying to integrate into the German culture. We go to language courses so we can learn the language and find better work. The kids are visiting local schools that will provide them with better jobs than their parents currently work.

The second reason I chose Germany was because my sister’s family and some friends of mine were already there. So the risk that I took was far less than for others. The most important thing for me was that in Kaiserslautern, my community from Lom already had a church—every Sunday around 50-70 people worship God. I knew that I would be able to find support and strength to continue and not to quit this new life my family and I have chosen.  And it was just like I had hoped. Everyone encouraged me that things will get better, and to pray and believe. Most of the Roma immigrants would not last without the church as they find spiritual and moral support there.

The Church as the Center in a Migrant Community

There are four churches in different places in Germany made up of Lom immigrants.  Pastor Ilija travels from Lom every other month to visit the churches. The churches are an important center for the Roma immigrant community. The church in Kaiserslautern united us and sustains our lives. Although the church is open for everyone, primarily people from Lom visit it. The church service is conducted in Bulgarian and we sing some songs in the Romani language.  When we come together, we remember from where we started, who we are, and that we have the same roots. 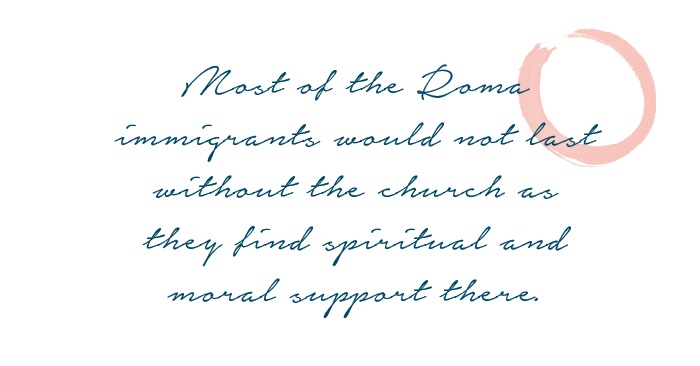 The church in Kaiserslautern keeps focused on its purpose: To preach the gospel for salvation. Young people have surrendered their lives to God. People who were drug addicts have been changed by the power of God. In Bulgaria, there were people that I never imagined would repent. In Germany, however, they find God—or rather, they are found by God. Perhaps this is because in Bulgaria, they could rely on their comfort in the culture and their tightly knit communities. In Germany, they feel more vulnerable and are forced to depend more on God. They begin to pray more and see how God answers their prayers. The church builds the character of young people and gives them direction for their lives, since some of them had only experienced living in the mahala and did not know how to navigate the larger society. We also remind ourselves that in Lom, there are many poor families. Because of this, our German church decided to send some money to Lom for orphans and poor families.

Our church is active in making connections outside of the Lom community as well.  In  2017, we organized a conference in Germany with guest preachers from Bulgaria.  This was a very big event for the Roma immigrants from Lom. At those meetings, Roma came from other parts of Germany. Such conferences strengthen our spirits and give us the power to go on. When we are together, we feel that we are back in Bulgaria. We are also expanding our networks; we have started to work with a church in Wiesbaden that has Roma members from a different part of Bulgaria, and we also work with German Roma friends.

In conversations that I had with some of the people, they explained that the reason they left Bulgaria was to have a better future for their kids. They want their kids to have opportunities they did not have in Bulgaria. We all hope Bulgaria can eventually succeed to be a place for good living and not just for surviving. We want our educated young people to stay in Bulgaria and not to leave because they do not have the opportunities to succeed. We all want to go back to Bulgaria one day because there is no better place than home.

But in the meantime, God is using this economic crisis for our growth and benefit.  Similar to when Israel came out of Egypt and traveled to the Promised Land, God also wants us to humble ourselves, to obey His words, to learn how to live in a godly way. The circumstances we face require us to trust God every day just like the Israelites did in the desert. Perhaps this is the main reason that so many people who did not repent back in Bulgaria are being transformed in Germany.

[1] Atanasov, Miroslav. “Gypsy Pentecostals: The Growth of the Pentecostal Movement Among the Roma in Bulgaria and Its Revitalization of Their Communities.” (Asbury Theological Seminary, 2008); Slavkova, Magdalena. “Prestige” and Identity Construction Amongst Pentecostal Gypsies in Bulgaria.” In Thurfjell & Marsh eds. Romani Pentecostalism: Gypsies and Charismatic Christianity. (Frankfurt: Peter Lang, 2014).

[2] This crisis is noted in other places in rural Bulgaria.  See, for example: http://www.telegraph.co.uk/news/uknews/immigration/10545458/Ghost-towns-left-by-Bulgarians-seeking-work-in-UK.html

[3] Data from the National Statistical Institute and the Economics Institute with the Bulgarian Academy of Science. http://www.novinite.com/articles/171684/More+Bulgarians+Working+Abroad+Than+in+Bulgaria

Nayden grew up in the Roma mahala in Lom, Bulgaria. He, his wife and daughter recently moved to Germany. He is establishing his family there, working on his paperwork, and will soon be looking for a stable job.