The white gunnysack keeps slipping out of my hands. It didn’t feel this heavy when we started walking 20 minutes ago, but now my arms feel like wet noodles in this Bangkok heat and humidity.

Calvary Baptist Church volunteer Kim Amihan grabs the bag from me and lets out a grunt at the weight. I swear we are carrying 70 pounds of rice but it’s really just ten, plus spices from South Asia, cookies, canned meat and an odd assortment of extras from the church’s “world hunger food closet.”

We are taking it to a refugee family, but are lost on the backstreets of Bangkok. We definitely look out of place in this Thai neighborhood: a Filipino, a Brit and two Americans looking for South Asians. International Mission Board missionary Carrie Chappell finally spies a smiling William Younus waving at us. He quickly invites us out of the scorching sun and into the oven he calls home.

Two teenage boys pour us glasses of cool water while their preteen brother confiscates extra stools from the neighbors. The four of us sit shoulder-to-shoulder in the open floor space of this tiny concrete room. The boys and their parents squeeze onto the only other available spot, on top of the lone bed crammed into one corner.

This roomis no bigger than a child’s bedroom in most American homes, yet a family of five lives here. Even so, it isn’t quite what you expect when you think of refugee life.

The iconic image of refugees is row upon row of white tents in a sprawling emergency camp, not a dingy apartment in a mega-city. But the reality is only one-third of the world’s 15.4 million refugees live in camps. Like most of the world’s population, refugees have steadily moved into cities and towns. Urban refugees are among the fastest-growing population segment globally.

Thousands of people like the Younuses live in Bangkok, where the United Nations refugee agency, UNHCR, has an office. They estimate that 90 people seek asylum each month in Thailand, fleeing from some sort of persecution or war. 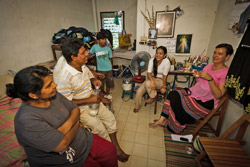 Younus lifts his chin to show us a shiny scar from a knife wound. His 12-year-old son peels back his shirtsleeve to reveal a scar from a bullet. They were threatened for being Catholic. The family fled to Bangkok in the hopes of not only safety, but a better future. What they didn’t know was that urban refugees often face dangers and hardships those in the traditional camps never experience.

The South Asian men explain they knew it would be difficult to leave everything behind—the family business, their home, dishes, clothes, friends and family—but no one warned them about the isolation, depression, fear and hunger that most suffer when seeking asylum, especially outside of the large refugee camps.

In an urban environment, the UNHCR cannot always provide services, protection or support as easily as it can in a camp. Filling this gap is the reason our group is traipsing around Bangkok carrying a gunnysack of food. Chappell explains that asylum seekers are not allowed to work or earn money. Once the UN has granted them refugee status, they receive a small stipend for rent until they leave for their new host country or are repatriated to their old one.

Navigating through the UN paperwork can take years. In the meantime, families like the Younuses struggle to survive. For the first time in their lives, these doctors, bankers, accountants and business owners turn to begging to feed their families.

“Jesus is so compassionate that we want to share His compassion with others,” Chappell explains. “This often starts with a bag of food and a listening ear. They just want someone to talk to...someone to share their stories with. They want to know that someone cares about them.”

Calvary Baptist Church realized the urban refugees’ needs were an opportunity to minister to “the nations” in their own backyard. 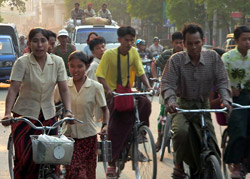 With the help of Southern Baptist World Hunger Funds, the church established a food closet supplied with a few comfort foods from various countries. Volunteers from the congregation distribute the food during their spare time.

“We decided early on that we didn’t want to have the refugees come and stand in a distribution line. We wanted to really connect one-on-one,” Chappell says. “We want to have personal contact and meet each family in their home like this.”

I can see love and concern in Chappell and Amihan’s faces and hear it in their laughter. The two sit in easy companionship with this refugee family. By the smiles, Chappell knows they are excited to have visitors. Finally, someone cares enough to listen to their story.

‘That’s how I met Jesus’

Thailand is one of the few countries that does not honor the international human rights law protecting those who flee persecution and seek asylum outside of traditional camps. Instead, urban refugees are considered illegal immigrants.

Younus says his family is in constant fear of being arrested, so they stay in the small cement-block room they rent. They are lonely and depressed.

Chappell nods her head in understanding. Providing social interaction is one reason church members visit refugees’ homes. She invites them to church, mentioning several families attend a small church in their language. They would love to add another family from home.

I try to hide my smile at Chappell’s understatement. The international church has many small groups studying the Bible and offering each other support in language groups from Africa, South Asia, and Southeast Asia. Some of the small group leaders are trained pastors who are also refugees.

When it’s time for us to go, no one wants the visit to end. Our new friends walk with us to the main road and promise to drop by Calvary on Sunday.

Back at the church, we meet a group of refugees sweeping the parking lot and raking leaves. They do this every week as a way to say thank you and serve the Lord. A 19-year-old who was baptized a few weeks ago asks if we have just come back from visiting.

I give a tired nod and his smile grows wide.

He goes back to work, humming a worship song.

This is the same story I hear repeatedly from the refugees: “Someone came to my home and shared Jesus’ love.” For believers, Calvary’s ministry provides a safe place to worship their Savior. For those who have never heard, Calvary introduces them to the gospel.

Just thinking about this makes me want to load up a gunnysack with food and visit another family.

Give the poor the gift of life
• Visit our websitewww.holyoneofgod.com   at free of cost in which you can have a glance on the social services.
• We feed the poor orphans and the old aged people with the little what we have but most of them starve for food still and I am helpless so I pray to God to bless these people with sufficient food.
• Hence, a humble request to all of you to donate a dollar for each orphan so that they can have their meal for a day.
• We are running a welfare organization for poor people. Our projects are as follows
• *Free food supply *Rice and wheat distribution * Cloth distribution to poor people * Educational support programmes* Free medical camp and medicine distribution * Free note books and text books distribution * S.C & Tribal community development program. Visit our website http://www.christianwelfare.in
Thank you.
Kindly send your favorable donations
State Bank of India (SBI)    Contact:
Branch code : 0907         SNEHASAHA ORPHANAGE
Branch Pin Code IFSC:SBIN0000907       Door Num:26 – 1- 43,
Bank Account No : 11046483437       Near R.T.C complex,
M I C R Code : 533002402         Ramchandrapuram
For the credit of Ravi Kanth Lanka       East Godavari District,
Phone: +91 – 9391146445         PIN: 533255
Andhra Pradesh
South India

Susie Rain lives in Southeast Asia after serving 10 years in Africa. She has traveled to more than 140 countries writing about God’s work among His people. You may follow Susie on Facebook at .(JavaScript must be enabled to view this email address).