Harold Fickett has collaborated with Charles Colson on several books, including the contemporary classics Loving God and How Now Shall We Live? He has written novels, biographies, and works of spirituality. 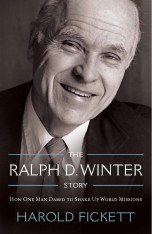 Harold Fickett’s recent work The Ralph D. Winter Story: How One Man Dared to Shake up World Missions is a fantastic primer into the abiding impact of the founder of the U.S. Center for World Mission. Its slender 180 pages are quickly and enjoyably read and filled with insights into not only Winter’s life, but also the American evangelical milieu during the same time period. Weaving interesting anecdotes and narrative, it succeeds in outlining Winter’s life and demonstrating his key contributions to the Church. He is today remembered primarily in the area of missionary theory and practice. To a much smaller extent he is remembered in the areas of the Protestant reappraisal and reappropriation of the concept of the “religious order” and the interplay between science, disease eradication, and theodicy.

Though Winter’s name is not as well known as, say, Billy Graham’s, his impact has been enormous. Anyone who has ever been invited to pray for an “unreached people group” has Ralph Winter to thank in large part. Had he not providentially arrived on the scene in time, Western missions might have died out by now, wrongly convinced that the missionary task had, by a faulty colonialist definition, been “accomplished”. Likewise, today’s proliferation of “branch seminaries” dotting every major U.S. city owes its existence, in part, to Winter’s pioneering work in “Theological Education by Extension”. Without Ralph Winter, thousands of Christians would never have attended a “Perspectives” class (perspectives.org) to gain a new appreciation for missions as the overlooked key to Scripture and church history.

A “late bloomer” in some ways, Winter ultimately accumulated a B.S. from Caltech in civil engineering, a PhD from Cornell in linguistics with minors in cultural anthropology and statistics, and, finally, a Bachelor of Divinity (precursor to the modern MDiv) from Princeton Theological Seminary. Ordained in the Presbyterian Church USA, Winter and his wife, a trained nurse, soon ended up as Presbyterian missionaries to what would now be called an unreached Mayan people group in Guatemala. From that experience his first and major contribution to the worldwide evangelical movement would be made.

At the time Winter and his wife, Roberta, were dispatched to Central America, the mainline denominations were re-evaluating their missionary enterprises. These institutions felt the sting of being called “colonialists” and “imperialists” and were growing more sensitive to the imperative of indigenous churches directing their own affairs. “Missionaries” were called “fraternal workers” to emphasize their roles as partners and servants. A moratorium on all Western missionaries was seriously considered by some, though never adopted completely. It made a certain sense to stop sending missionary evangelists if by “nation” one meant the post-colonial “nation state”. Arguably, all the former colonies had some locals converts who might be considered “indigenous” churches.

Winter’s observations in this area changed the operating definition of ta ethne (the nations) referred to in Matthew 28’s Great Commission from arbitrarily contrived post-colonial nation states to people groups in the evangelical missionary vocabulary. Suddenly the call to evangelize took on new urgency because, despite 2 millennia of missionary endeavor, most people groups remained totally untouched. At Lausanne in 1974, Winter gained the platform that would allow him to reorient the thinking of evangelicals. The colonial paradigm of mission would soon become as antiquated as the concept of a flat earth.

The situation of the Mayans he served likewise prompted his next then-revolutionary actions. The national church had no Mayan clergy because the education of the tribal peoples was too low to allow their entrance into the Presbyterian seminary. Experience with Latino candidates also showed that after leaving the countryside to attend seminary, graduates were reluctant to return to the squalor of the villages. Few seminary graduates even remained in full time ministry. They parlayed their advanced degrees into more lucrative positions with multinational corporations needing articulate and loyal locals. Winter overcame the problem by developing correspondence training for the indigenous people that allowed them to obtain the equivalent of a  “G.E.D.” without having to return to school or quit working. Finally the barrier to entering seminary was overcome.

Because no Mayan student could relocate to seminary and still provide for his family, the next issue was the problem of delivering training. Thanks to the problems with residential training model outlined above, Winter was able to convince the mission to close the seminary and redeploy the faculty to do training where the students lived through correspondence and regional training centers. With some cajoling the seminary agreed. After a tumultuous two years, the results were a much larger student body. Finally the underserved Mayans would have their own trained leaders and a church not totally alien to their culture.

The Frontier Mission Fellowship remains as a testimony to Winter’s reappraisal of the Catholic religious orders and its application to mission. In evangelical circles, it’s common to act as if “missions” didn’t start until William Carey in 1792. In reality a plethora of religious orders always pursued “missionary” projects long before Carey. Winter, therefore, considered the Roman Catholic religious orders as possible models for modern missionary enterprise that evangelicals had overlooked. He envisioned a covenanted body of disciples devoted to a peculiar missionary calling within the larger life of the Church and lead by a central leader or “abbot”. Till his death, Winter served in that capacity. His thinking on the subject is captured in his paper “The Two Structures of God’s Redemptive Mission”.

At the end of his life, Winter’s thoughts turned to the topic of theodicy, science, and, in essence, the next missionary frontier for Christians. This direction was a result of a personal crisis, the death of his first wife Roberta. He grew weary of comforters assuring him that her death from cancer was “God’s will”, i.e. a divine gift and good instead of a symptom of creation’s fallenness. The article “Where Darwin Scores Higher Than Intelligent Design” reflects the direction of his thought in his last years. He came to believe not only in the positive design of God’s creation, but in what might be called “malevolent” design or more bluntly the sabotage of God’s world through the work of the Evil One to corrupt and pervert nature. Winter founded the Roberta Winter Institute so that Christians would be challenged with the task of eradicating all disease. At the end of his life, Winter considered the existence of disease as much an affront to God’s glory as the existence of unreached people groups.

Winter’s biography is an excellent one to be widely read. Many of those who laud him for his missiological innovations may wince at some of his later directions. However, even his thoughts on theodicy may aid the larger cause of the Church by reminding us that the “Augustinian” view of providence he came to question can devolve into fatalist passivity. It’s all too possible to glibly quote Romans 8:28 to mean that “everything that happens is intrinsically good and therefore God’s immediate design”. Romans 8:28, however, is not comforting because it asserts that God is the author of evil, but because it asserts that God as sovereign wills and works so that evil not have the final say, even in our suffering.

Fickett’s work on Winter is a joy to read. Students of mission, those seeking to understand twentieth century evangelicalism, and those seeking personal inspiration for their callings will all benefit from these pages.

(This book review was originally published by Chuck Colson's WorldViewChurch.org and reprinted with permission.)

Rev. Chuck Huckaby is the Minister of Congregational Life at First Protestant Church in New Braunfels, TX. You can find his page on Facebook