Growing U.S. Movements to the Lost and the Unreached

The Jan/Feb 2012 MF article about Curtis’ work in Asia described the transformation of a “heartless place with no hope” into a place where “every village has churches. The worship is phenomenal. They’re sending out missionaries! The government formerly persecuted the Christians, and now they are encouraging churches because the crime rate is down.” Now the same dynamics are unfolding here in the U.S. 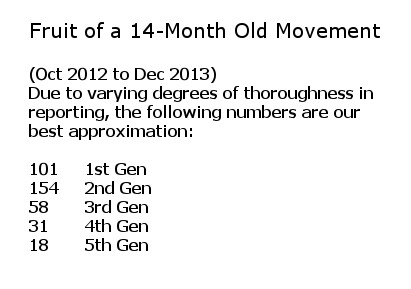 We started our house church in October 2012. We just called it “porch church” since we started by meeting on our porch. We started with eight folks but only have seven now. We’ve intentionally not added new members but seek to start new churches with new folks. As of December, 2013 we have multiple streams to the 5th generation or beyond and well over a dozen more to the 4th generation. All told there are about 200 downstream churches in the USA and 162 overseas, including several among previously unengaged people groups. The total number of new professions of faith is now over 10,500. Some of those have chosen to join traditional or legacy churches rather than the house churches.

Our vision is to make it the norm for followers of Christ to become multiplying disciple-makers. To expand that a bit, we want to see people obeying the Great Commandment and the Great Commission. Our shorthand for that is “obey GC2.” If the task our Lord left us is ever going to be finished, it will require His followers to be of that sort.

When someone decides to follow Christ we immediately ask them to make a list of 100 people they know and pick 5 of those who are not followers of Christ whom they want to tell about their decision right away. We then work with them right then and there to learn how to share their testimony (about how they came to their decision) and the gospel. We have them practice doing that five times, role playing once each for each of the five. We then try to set an appointment for a couple of days later to get together with them and see how it went. If any of those people decide to follow the Lord then they are also directed to make a list of 100 people they know and follow the same pattern. The goal is to try to get a few people from the same network of relationships among whom a new church can be started. 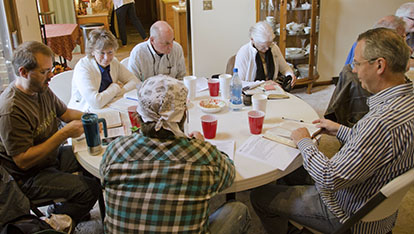 We then begin to coach the new believer in basic discipleship patterns which he can begin to share within his or her list of 100 whether or not they are already followers of Christ. These include participative Bible studies, accountability groups, and prayerwalking among others.

The participative Bible studies are the heart of the house church weekly meetings (although quite often there are other times they get together as well since they consist of people who are within the same network of relationships). The first part of the time is spent in “catching up” with everyone, praying together, singing, and then seeing how the obedience points from the week before were carried out. These points include what the Lord specifically asked each person to do in response to the Bible passage studied, who the passage would be shared, and with whom the Lord was leading them to share their testimony and the gospel. Then there is a reminder about the “big picture” task and vision which is usually very brief. Then a passage is read and some basic questions are discussed among the group. These include: “What do you like about this passage? What is confusing or challenging about this passage? What can we learn about people? What can we learn about God?” The scripture will be read again or in some groups it will be paraphrased or quoted between questions. Then the group spends some time in individual prayer asking for guidance from the Holy Spirit in how to apply the passage personally (and specifically: when, where, and how) and with whom they are to share the passage. They also ask with whom they should share the gospel in the coming week. After the prayer time, people share what they heard and what their commitments are. These are written down for use at the next weekly meeting. The group then shares a meal together.

The accountability groups are an adaptation of Neil Cole’s Life Transformation Groups. They are groups of two or three people of the same gender who read about thirty chapters of scripture each week and then discuss a list of general life accountability questions. This is a different set from Neil’s but has some similarities. We have a separate list of questions for children.

Prayerwalking is used to help people develop a constant sense of God’s presence, to help them learn to look at their surroundings with spiritual eyes, and as a great opening for evangelistic opportunities as they pray for people in their presence.

There is an expectation that every person will be involved with two house churches at a time. One is their primary spiritual family. This remains constant. The other is one they are helping to launch. With that second church they serve as a model and then in coaching or assisting that new church to learn the above practices and begin to pass them on to subsequent generations. Once that process is successfully underway in the second church then the relationship backs off to a more consultative and periodic contact which we call ”watching.” Because of the relatively light responsibilities in this phase, one person can “watch” a number of churches at the same time. We suggest they only model or assist one church at a time, however.

In addition, we seek to help disciples develop “eyes to see where the Kingdom isn’t.” In other words, they look for gaps between what is and what the Lord desires. They look for the darkest places. They look for the least, the last, and the lost. They look for those without access to the gospel. This means they not only seek to help all the people on their list of 100 take their next step in their spiritual journey, but they also look for persons of peace among those who need the gospel most desperately. They then follow a Luke 10/Matthew 10 type of approach to seek to launch new churches among these communities. 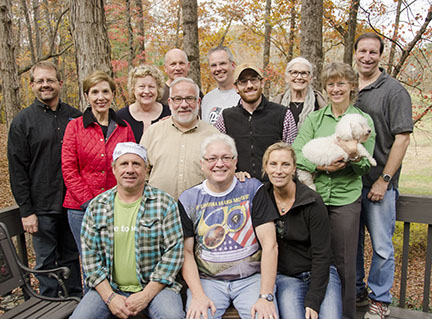 We focus on equipping all followers of Christ to be self-feeding in terms of interpreting and applying scripture, prayer (speaking, listening, teaching, reaching, etc.), body life (such as through practicing the “one another” passages and utilizing spiritual gifts), and persecution and suffering (being intentional in order to develop character, increase faith, equip for ministry, glorify God, etc.) The point is to make everyone a producer and not merely a consumer in living out their spiritual lives.

One of the streams from our little church was started in Tampa, Florida. Within eight months it had fourteen streams, twelve of which were at least third generation, from it (and fourth from our church). Several were an additional generation. There were streams among former Hindus, former Muslims, homeless people, prisoners, and mental hospital patients, as well as more “typical” middle class white folks. This was all initiated by a brother who has a nutrition counseling company.

To me, one of the greatest challenges to doing this in the USA is that people assume they know what it means to be a Christian and what a church looks like. Thus, finding people who are dissatisfied enough to make significant change can be difficult. Generally, the “known” approach does not result in great fruitfulness or life change.

In 2014 I am running several workshops here in Dadeville, Alabama to equip others to follow this same sort of pattern and help them develop a three-month implementation plan with three months of coaching access and an option to continue longer. I find this the most efficient and effective way for people to understand this approach at a level where they can and do implement it. These workshops are scheduled Mar. 17-21, Jun. 2-6, Jun. 30-Jul. 4, and Jul. 28-Aug. 1.

Dave Treat recently learned a question that he says will drive the rest of his life: “Am I a disciple worth reproducing?”

He started asking this question while at New Water Ministry, a new training center in Dadeville, AL that teaches Christians to make disciples who make more disciples and eventually multiply house churches.

“I went with the feeling that a lot of what I knew about discipleship was incomplete or downright wrong and was ready to have my assumptions and practices challenged. I was not disappointed,” said Treat, director of missional communities at Asbury United Methodist Church, Madison, AL.

After his time at New Water Ministry, Treat said he let go of a lot of theory “in favor of the reality of changed lives.”

That’s what Curtis Sergeant said he hopes New Water Ministry does—take Christians from a mindset of “we’re a Christian nation, we already know how to do all this stuff” to a lifestyle of active disciple-making.

The command to “make disciples” demands obedience from all Christ followers, but “if you look around, you don’t see a lot of multiplying disciple makers,” says Sergeant—a former International Mission Board (IMB) representative who founded New Water Ministry. “We want to equip people to be fruitful disciples for the Kingdom.”

So far, the numbers show that this is happening.

Greetings from distance South India.  I may please be permitted to place this letter before with all respect.  I would like to introduce myself as a P.Varaprasadarao, doing ministry for 13 years at payakaraopeta in visakha district in Andhra Pradesh in India.

We wanted to reach the un-reached villages of Sea-shore areas as well as interior areas.  For that we prepared team of missionaries for Church Plantation in un-reached areas in Andhra Pradesh.  But our missionaries are facing lot of troubles from the field due to lack of Church Shelter and ministry equipments and oppositions.  For that we are unable to move to another un-reached area.  So we wanted work with you to reach the un-reached.  But still we wanted to cross the seashore people and as well as tribal people. We are also doing gospel work along with social action. I am looking for your kind reply
Prayer points
Church plantation, seminars
Orphan home, provding drinking water by bore wells
Missionaries, outreach ministry
Tracts distribution
Film ministry

Greetingsin the name of Lord Jesus Christ from Bangladesh.  I am praying for new Community Church of Bangladesh for the MBB Please help me.

Curtis served with the IMB as a church planter among an unreached people in China and as a global trainer of hundreds of people in rapidly multiplying churches. Collectively those trained have planted several hundred thousand churches. He went on to serve as the Director of Church Planting for Saddleback Church where he was instrumental in initiating church planting in nearly 100 previously unengaged people groups. He then served with e3 Partners as an International VP for three years. He now lives in Alabama where he runs New Water Ministry to train others. You can contact him at .(JavaScript must be enabled to view this email address).