This is an article from the January-February 2023 issue: Cascading Gospel: Movements Starting Movements

I often tell people, “My job is to hear about the incredible works of God and proclaim the incredible works of God. That’s a pretty unbeatable job.” Sometimes when speaking to a group, I tell them, “I’m going to give you some good news: the kind of news you almost never find on the internet or on TV. Most of what’s out there is bad news. Scary news. Irritating news. I’ve got news that is thrilling!”

Kingdom movements (four or more generations of churches planting churches, in multiple streams) are happening outside the direct personal experience of most of us. We didn’t come to faith in a movement and we’ve not catalyzed a movement. We know missionaries who have labored faithfully for many years and not seen a movement result. Some of us (myself included) are, or have been, workers who saw some fruit among the unreached, but nothing resembling a movement. As a result, the whole idea of catalyzing a movement can have an aura of mystery about it.

We may have learned about how movements begin, and tried implementing the seven “High Value Activities,” but not yet seen a movement result.

That can lead some to questions: “Is  there  a  secret ingredient for catalyzing a movement?”  “Do movements only happen in certain places— places where I’m not?” Recent research has given us more information about how and where new movements are starting. Some of the  answers  may be surprising, and call for adjustments in our attitudes and efforts toward seeing all of earth’s peoples impacted with the Gospel.

It turns out that 80–90% of currently existing movements have been started by other movements!

Just five years ago, the January-February 2018 issue of Mission Frontiers, with its theme “Are You In?”, introduced the global 24:14 Coalition (2414now. net). This group of CPM practitioners has grown and matured in the few years  since  its  launch. It includes house church movements from South Asia, Muslim-background movements from the 10/40 window, mission sending agencies, church- planting networks in post-modern regions, established churches and many other groups.

The editorial of the 2018 issue  described  a “New Paradigm—Multiplying Movements,” giving the encouraging fact  that  “In  over  600  areas  and peoples, disciples are making disciples and churches are planting churches faster than the growth in population.” In the five years since then, the number of known movements has more than tripled: to 1967! Some of those movements already existed in 2018 and have more recently become known to the 24:14 database. Hundreds of others have newly crossed the threshold to more than four generations, to be counted as Church Planting Movements. And we’ve discovered a key reason for that phenomenal increase: movements are not only multiplying disciples, churches, and leaders. Movements are also multiplying movements. 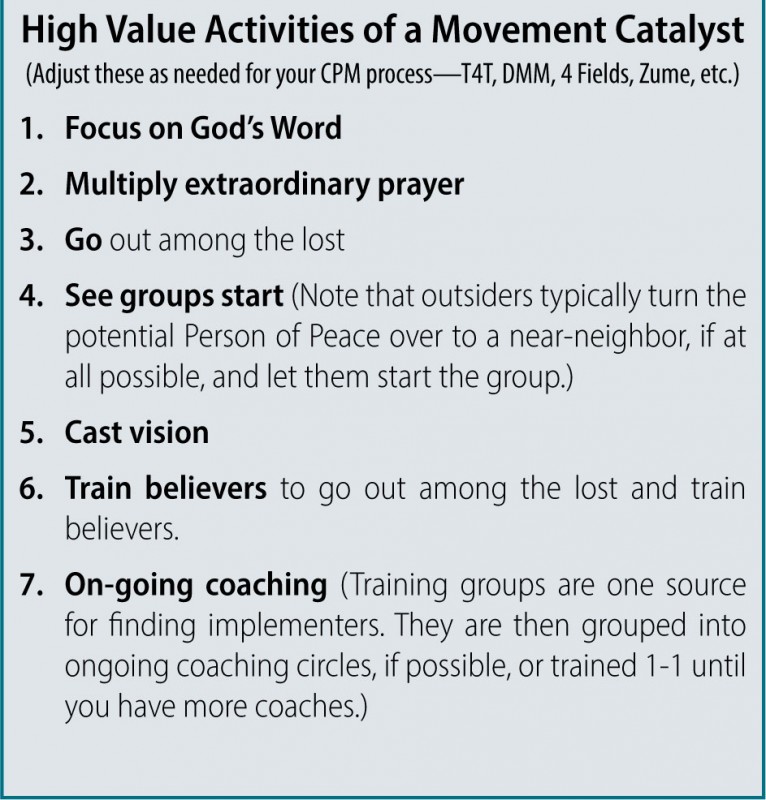 The “Are You In?” issue described some known first fruits  of  this  reality,  with  three  vignettes  of   “Movements   Multiplying    Movements.” We’ve now learned that this phenomenon is happening in hundreds of places, as disciples carry the good news across various boundaries (cultural, ethnic, linguistic and/or geographic) to people groups who still need to hear.

In this issue, we’re blessed to be able to offer you  a few security-sensitive glimpses into some ways God is accomplishing this multiplication through his servants. Our lead article, “Cascading Gospel: Movements Starting Movements,” gives some background behind this phenomenon, along with five missiological problems and how movements- starting-movements brings answers to these problems. The article “Movements Spreading as God Leads His Children” testifies of the Lord leading disciples to take  the  Gospel  across  boundaries  of geography, ethnicity and  nationality,  resulting in generational multiplication of disciples and churches. “DMM Jumps to Another Desert Tribe” illustrates how even relatively new believers and churches are bringing good news to those that many would consider very hard to reach. In “Look Where You have Cousins,” we see how Spirit-led strategizing with prayer and fasting led to numerous open doors for Gospel advance. We also see how careful observation and analysis brought multiplied fruit among proximate (nearby) unreached peoples. Recognizing the Spirit’s work in organic cross-cultural outreach is bringing increased intentionality in watching for opportunities to bring the Gospel to proximate peoples.

“Disciple Making Movement Jumps to Another Continent” describes a long leap in movement multiplication—the kind of jump-over that only God’s Spirit could have planned. “Cloud by Day Fire by Night” testifies of the importance of “listening to and obeying the voice of the Holy Spirit on every occasion, rather than depending on or presuming that a pattern or method which worked last time would be appropriate in the next opportunity.” This family of multiplying movements in hard places shares six categories of questions they ask, then “wait for an answer from the Holy Spirit and God’s Word that fits the context and is confirmed in all of our hearts.”

The article “Multiplying Movements through Organic Growth” describes the organic expansion that has allowed this family of movements to multiply into numerous ethnic groups and nations. Through careful analysis of the Spirit’s work, they share with us the movement-multiplying social patterns and empowerment dynamics that have made possible tremendous multiplication of movements in their region. “How Long to Reach the Goal?” analyzes data on movements over the past 30 years and considers possibilities for the future in light of that data. “What Must be Done?” then wraps up our theme section with consideration of possible roles God’s Spirit might be calling each of us to play, in light of His amazing work in our day.

We have the privilege of living in a time when God’s kingdom is forcefully advancing  among  the unreached. Challenges are many and threats abound. Yet in the midst of all these, we can praise God for his mighty work among the nations. Often the greatest threat is the apathy or distractedness of God’s own people. As we pray for continued advance to the unreached, we can also pray for faithfulness and a radical focus on Jesus among those who name the name of Christ. And we can offer our own lives afresh as a living sacrifices for his glory. May the Lord move in your heart and mind as you read the exciting news in this issue.

Dave Coles (.(JavaScript must be enabled to view this email address)) is an encourager and resourcer of Church Planting Movements among unreached groups, serving with Beyond (Beyond.org). He served among Muslims in Southeast Asia for 24 years. He has dozens of articles published about Church Planting Movements. He is coauthor of Bhojpuri Breakthrough: A Movement that Keeps Multiplying, coeditor of 24:14 - A Testimony to All Peoples, and associate editor of Motus Dei: The Movement of God to Disciple the Nations.