Beginning in 2006 my wife and I had a genuine problem on our hands. Churches were multiplying! All that we had studied, prayed for and discovered in Scripture suddenly seemed to erupt before our eyes in the form of new churches being birthed in every direction. The challenge of measuring, coaching and determining next steps within an emerging movement created a new set of questions. Over the past few years our pursuit has created greater dependence on Scripture for models. We have found direction and fellowship with the tasks laid before the first Apostles and Paul.

What would you do with 3,000 baptisms in a day? To what degree were the Apostles responsible before the Lord for the fledgling churches scattered across Jerusalem within the weeks that followed? How did Paul sleep at night, when the need for leadership devlopment and church formation outgrew his calendar? (2 Cor. 11:28). A generation later how would Peter determine the necessary content of a letter addressed to churches scattered across Pontus, Galatia, Cappadocia, Asia and Bithynia?

Clearly church growth, when genuine, must be credited to the investment of the Holy Spirit. But for the first time in our ministry the reality of multiplication brought the questions of ongoing responsibility in an emerging Church-Planting Movement (CPM) into our lap. Did we see 3,000 in a day? No, but within two years the networks we were coaching were reporting a sustained average of 46 baptisms a day. These newly baptized believers were being formed into an average of eight new congregations daily. The question haunted us, “How will we ensure elements of church health on the edge of these emerging movements?” We knew the discipleship chains that had multiplied new believers would be the key to multiplying elements and leaders for church health as well.

Into this scenario stepped a man named Jeff Sundell. Jeff had seen movements in the past. He had become a student of CPM’s firsthand in the Asian context. As we sat with local church planters, Jeff began to discuss and draw out what would become a revolutionary tool in our pursuit of healthy churches in the midst of movements.

Sitting with the first of a string of national church planters who collectively reported nearly 60 new church starts, Jeff began by asking for a list of the churches this man had personally planted. Six were listed as the evangelistic work of this church planter. In response Jeff drew six circles across the top of a piece of chart paper and labeled these six, ‘1st generation churches.’ After asking for the names of local leaders, locations and approximate dates for the start of these congregations, Jeff asked who, if anyone, within those groups, had been trained and faithful to start further groups. Our partner pointed to the third circle and mentioned the name of the local leader who had also been planting other churches. As it turned out, this brother had planted five churches independent of the original church planter. At this point Jeff’s drawing resembled the chart below.

The process was continued until 52 of the churches reported had been accounted for on generational charts. As Jeff led us, that day, we interviewed leaders of new churches stretching across four generations. The report of 60 churches was actually a living example of 2nd Timothy 2:2 within the multiplication of this network.

Generational growth is multiplication. Generational multiplication is the standard by which CPM’s are defined. We quickly learned as churches begin to multiply in new generations the church planter’s calendar does not multiply at the same rate. As churches multiply, visiting each new congregation becomes impossible for the original church planter. The church planter has become a CPM catalyst. At the same time the perceived responsibility for healthy DNA across these generations becomes increasingly difficult to track.

In an attempt to remedy this new ‘glorious problem’ we began to incorporate our studies on church formation within the generational mapping tool. Using the common elements from Acts 2 as markers for elements of health the generational chart quickly took on a diagnostic function. The Acts 2 markers helped us recognize areas of weakness or concern across entire movements of church planting.

Taking time with your network of church planters to return to the basic, non-negotiable elements of healthy church is an invaluable exercise. Tracking these elements and their development within a training for trainers (T4T) format are your next steps.

Over the years we have studied this passage with thousands of first generation believers. Answers will include some variety in traditional settings. We have found however, the following elements emerge every time we conduct the study.

In Acts 2, healthy churches had the following characteristics. We represent each with a symbol for the purpose of the mapping exercise. 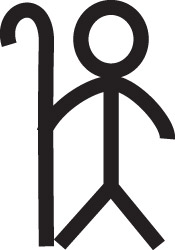 Lord’s Supper as Fellowship and Worship — 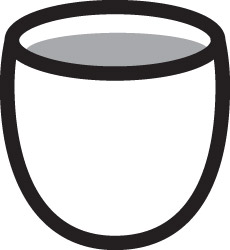 — we typically map this item only when authority for its provision exists within the church.

— we typically map this item only when authority for giving baptism exists within the church.

We also saw that certain functions of the church were more difficult to measure than simple yes or no questions. For example Acts 2 churches were clearly loving others, yet measuring this across movements of church planting proved difficult. For this reason we began to track training which demanded obedience in these areas with exposure to right motives and models. While we cannot control motives, we can ensure exposure to biblical practices necessary for such healthy function.

For the sake of our discussion here we will demonstrate the tracking of three training tools.

The bridge illustration for training new believers to share 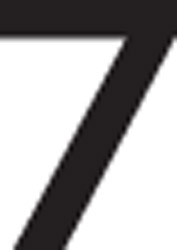 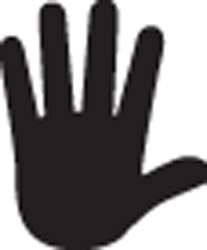 More recently we were served by the contribution of Steve Smith in the expression of church identity. While the most productive church planters we have worked with carry the intention of “church” with them into each evangelistic encounter, it is clear not all gatherings carry an internal church identity. For this reason we have begun to distinguish between “houses of peace” (fellowships) and established churches. Beyond church function the transition to church is a self-awareness of identity and vested authority for the practice of ordinances commanded by our Lord.

When a church planter reports the birth of a new group not yet aware of its identity as church, or not committed to being church it is added to a generational map with a dotted line as seen below. 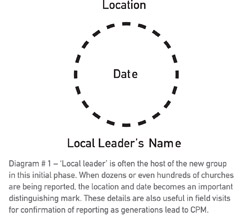 As elements of church health are introduced, modeled and commanded from Scripture the new group grows in self-awareness. Our coaching of church planters during this phase is highly intentional as the T4T (training for trainers) process focuses on accountability and elements of obedience from the Acts 2 list. Over a period of weeks or months the new group is led to function as church. 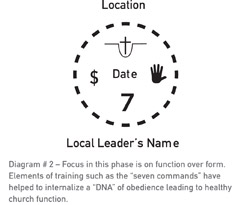 We have found the identity of church often solidified around the recognition of local leadership. Recognition and intentionality are indispensible in the development of healthy churches. The recognition of local leaders based on Titus 1 and 1 Timothy 3 character is often tied to authority and stewardship of the ordinances. It is important these authorities are vested in the local church as their function for unity, renewal and discipline are essential to developing church health across all contexts. Therefore we empower from within this new church to lead. Consider our goal in church planting, a healthy autonomous church as seen below. 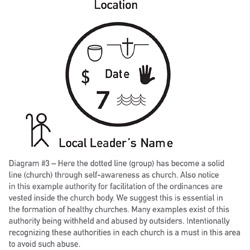 First Generation Church – these are churches started by the original church planter or in some circumstances approached for training by a church planting trainer. Ask trainees for locations, dates and the names of local leaders or hosts in groups they have begun. List them across the top of the page.

Second Generation Churches – these are churches started by members of first generation churches independent of the original church planter. The individuals responsible for these church starts are typically the “Timothy” type disciples of the original church planter providing spiritual “grandchildren” as the network begins to multiply for the first time.

Third Generation and beyond – these generations follow the same pattern as each generation is encouraged to take up responsibility to target its own fields. Typically rapid growth to the fourth generation (G4 movement) is a measure of church planting movements. By the time these generations emerge the need for such mapping becomes obvious.

Over time generational charts grow. Here is an example of a generational chart that has matured to third generation. Intentional implementation of Acts 2 elements leads toward reproduction. Remember, every CPM begins with just a handful of churches committed to obedience. Given time and intentionality multiplication of healthy churches is possible. 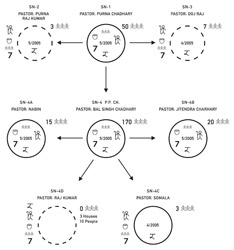 This sample was submitted by Mr. Tracy Guppy.

Once all existing churches have been mapped on the chart the elements of church health discovered in Acts chapter 2 can be tracked across the generations on the chart. As you track the Acts 2 elements, you will discover trends and deficiencies you need to address in your pastoral or ongoing church formation training. Generational mapping will reveal the “mess” multiplication creates. Remember, recognizing the mess leads to next steps for intentional coaching and encouragement as new believers “devote themselves to the Apostles’ teaching” (Acts 2:42).

Uses of the Generational Map

By mapping generations a paradigm capable of reaching an entire population comes into view. There are many effective church planters in the Kingdom. Their efforts and abilities serve as models, but will not finish the task. First generation church starts represent addition, not multiplication. No matter the gifting or ability of the first generation planter his efforts add new believers and church starts. We have never seen an example of this saturation approach keep up with population growth.

Growth across the page is addition. Growth in generations down the page is multiplication.

Generational charts have helped us maintain a focus on healthy churches in the midst of CPM. Lists of baptisms or new groups are not the only measure of success. We need a means for identifying and celebrating advances in healthy church function. Remember, the elements themselves do not create health. Rather the disciplined practice of obedience creates the venue for renewal leading toward health.

The chart is a tool for diagnostics as often entire streams lack certain elements. To be sure, elements of health do not skip generations. What is lacking in the parent will not spontaneously occur in the offspring. Content for practice, application and accountability are scripted in this manner. Within minutes plans are tailored to address elements that may have been neglected. In this way our “T4T” becomes more efficient.

What is the symbol used in this chart that is not identified in this article? It looks like the number 2 with a line on top.

That symbol is what Ms. Tracy Guppy used instead of the Cross-Bridge symbol for “Sharing the Gospel”.

Nathan Shank has been living and working in South Asia since 2000. He and his wife have dedicated themselves to the multiplication of God’s kingdom through church planting. Nathan and his team are currently tracking more than 50 networks of church planting with fourth generation churches. He is a regular contributor to David Garrison’s www.churchplantingmovements.com and Steve Addison’s www.movements.net