This is an article from the July-August 2018 issue: Finding “Fourth-Soil” People

Finding “Fourth-Soil” People: Modern Day Application Using the Parable of the Sower as a Field Guide

Applying the Parable of the Sower as a mission-field guide may represent a new concept for many missionaries, but I propose that the first generation of disciples likely knew this approach well. The word approach may be interchanged with strategy, modus operandi, or plan. Missionaries with varying backgrounds prefer different ways of saying this.

For Jesus to place His field strategy within a parable is ingenious. Encapsulating the lesson in a parable has enabled it to travel across time and cultures. Missionaries longing to work as Jesus did and see results that He experienced in pre-Pentecost Galilee will find value in taking the parable off the pages of Scripture and applying it in the field. Yet in my research journey, I found no scholar or preacher recommending literal application of the parable as a means of understanding Jesus’ original intent. Simple obedience, rather than intellectual contemplation, may represent the key to understanding the parable. Remember, it was farmers and fishermen who represented the original recipients of the parable.

My own application of the Parable of the Sower as field strategy took place in June 2017. I will present this application portion of my findings in steps, beginning with the selection of a target geographic location and, within that target area, a people group. Weekly follow-up took place, up to the writing of this article, for a total of ten months. Again, I have used pseudonyms to protect the identity of participants.

The square mileage of Galilee in the time of Jesus mirrors the state of Rhode Island, roughly two thousand square miles.

The South Asian district chosen for the project contains 2,400 square miles. Historians estimate a broad range of two hundred thousand to three million residents in Jesus’ Galilee. The population of my target people group, the Muslim Ro people, stood at five hundred thousand at the commencement of the project. Living as minorities in the district, the Ro people suffer and face tremendous hardships.

Step 2: Believe in a Potential Harvest

The parable’s climax moves past three soils with negative results and escalates to a surprising end, the discovery

of hundredfold-producing individuals. Since we know the end of the parable, missionaries approaching their “Galilee” should assume an attitude of confidence. I personally believe that the Parables of the Hidden Treasure and the Priceless Pearl (apparently told not long after the delivery of the Parable of the Sower) were used by Jesus to explain His attitude when approaching new communities in Galilee. The treasure likely represents the harvest coming from the Fourth-Soil Person.

To build up my confidence that a harvest awaited among the Ro people in the district, one year prior to the project I requested and arranged for a team of two near-culture evangelists to travel to the district and share the gospel among the Ro people. They functioned like the spies whom Moses sent ahead of the Israelites. The evangelists returned with amazing stories of Ro people responding to the gospel. On their journey they led eight Ro to faith and baptized them. I shared this report with a church in Houston, explaining that I believed a large harvest awaited among the Ro people. The church agreed to send volunteers and to finance the project.

Applying the Parable of the Sower required a season of gospel sowing in the form of evangelism campaigns. For the initial campaign, I attempted to reconstruct Jesus’ deployment of the seventy-two disciples. Eight American volunteers traveled to the South Asian district. As Jesus used disciples from the harvest in upper Galilee to seed lower Galilee, I arranged sixty-five disciples from the Way of Peace movement (from a neighboring district; with ten thousand baptized believers; see article on page 17) to join the project. In total, seventy-two disciples went out for three days boldly sharing the gospel.

Orientation occurred the evening before deployment. The seventy-two disciples were asked to forgo their normal approach to engaging lost people and adopt Jesus’ approach of “preach and heal.” For healing training we simply read three of Jesus’ healing episodes, analyzed what He said and how He healed, then agreed as a group to do the same. The main training involved the reading of the Parable of the Sower followed by explanation and specific instructions for field application.

Our group of seventy-two disciples, traveling in pairs, agreed to begin all engagements with Ro people by stating, “We are men of God and have come to your community to pray for sick people.” After prayer, the disciples would share the gospel; Jesus is holy, paid our penalty when He died, rose from the dead; we believe that Jesus alone can get us to heaven. The second portion of the orientation was given equal importance to the first portion. When a Ro person agreed to believe the gospel message, the disciples began analyzing and categorizing responses using the Parable of the Sower.

In John 4:34–38, the disciples return to meet Jesus after his encounter at the Samaritan well, where a woman immediately believed and returned to her town telling others about her experience. The disciples, not fully understanding the situation, prompted Jesus to explain how quickly a harvest can occur: “the sower and the reaper can rejoice together” (4:36). With that statement, Jesus taught the disciples to expect immediate positive responses; in the case of the woman at the well, they experienced large positive results. With this in mind and knowing that I would ask them to report on actions and statements from positive responders, our seventy-two disciples prepared to analyze this portion of the project.

After three full days of sharing the gospel, our group of seventy-two disciples debriefed in pairs, totaling thirty-six interviews. With elation, these disciples related more than twenty stories of Ro people being healed or stating that they felt better. A total 681 Ro people heard the gospel, and 399 Ro individuals responded positively that they now believed Jesus was their Savior and that there was no other way to heaven but through him. From the 399 positive responses, the disciple teams reported that 98 persons fit the descriptions of the Fourth-Soil Person. Narrowing down the 98, we identified seven individuals whom we would closely monitor over the next ten months.

Three Examples of How the Disciples Identified Fourth-Soil Individuals

After hearing and receiving the gospel from a disciple team, “A” immediately invited the disciple team to his house and called twenty of his neighbors to come listen to the gospel. A believed the gospel and asked for prayer. After the prayer, A said, “You gave us good news for  how we can go to heaven. We should tell this good news to others.” Over the past ten months, A has baptized twenty-six Ro individuals.

After “K” heard the gospel and believed, the disciple team heard K say, “I have to tell this message to my family and friends.” A few weeks later, K brought twenty-five of his family and friends to a gospel-sharing event hosted by the follow-up team. After ten months, K has seventeen baptized individuals in his emerging network.

The follow-up team keeps track of the seven individuals identified as potential Fourth-Soil People because of their immediate actions of sharing the gospel with their oikos, regardless of threats and concerns. From the seven potential fourth-soil individuals, a total of 163 (research includes generation tracking) Ro people have been baptized. A second seed-sowing campaign in new areas of the district took place three months ago in which more than three hundred received Jesus as their Savior and thirty-five experienced baptism. The follow-up team continues the work with ongoing Bible training for all new believers.

For missionaries familiar with Four Fields training (see diagram below), the Finding Fourth-Soil project takes place within field 2. Progressing from fields 2 and 3 occurs when new believers emerge from gospel-seed-sowing campaigns. Missionaries moving their ministry into fields 3 and 4  with many new second- and third-soil (nonreproducing) believers requires the missionary to take on a role as a motivator to get second- and third- soil individuals to reproduce. Progressing into field 3 with multiple Fourth- Soil People reproducing new believers represents a healthy emerging movement in which the missionary’s role appears much different from that of a motivator.

The Finding Fourth-Soil People project demonstrates that patience and hard work in discovering multiple Fourth-Soil individuals using the Parable of the Sower as a strategy plan makes a great impact on a people group and aligns the missionary’s ministry with Jesus’ model in pre- Pentecost Galilee. The temptation to move quickly out of field 2 with a handful of new believers to begin forming churches limits a missionary to a mode of “growth by addition.” Finding and investing in fourth-soil individuals can catalyze the work from “growth by addition” to “a movement of multiplication.” 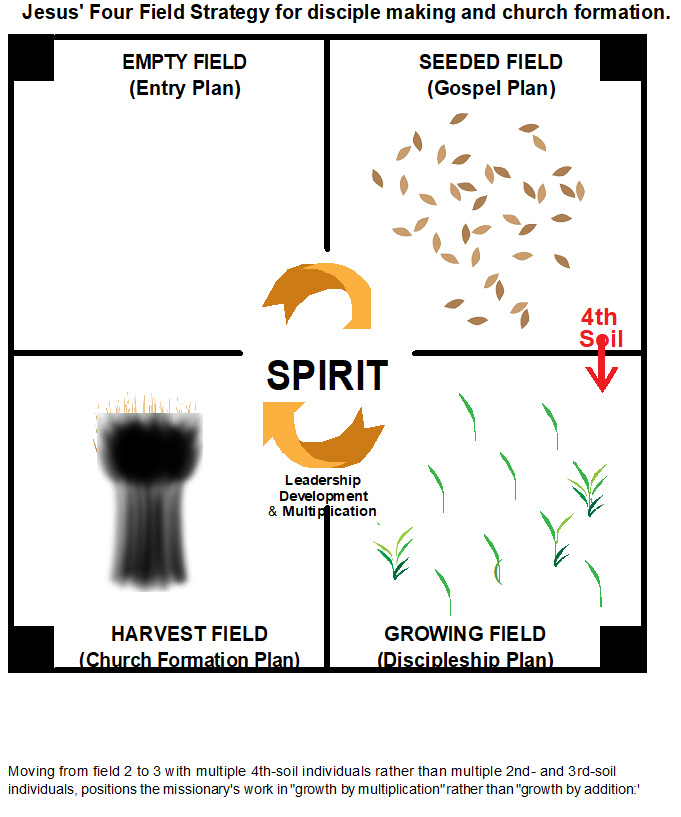 Kevin Greeson (.(JavaScript must be enabled to view this email address)) earned degrees from the University of Mary Hardin-Baylor and Southwestern Baptist Theological Seminary. He served with the International Mission Board, SBC (1993-2015), based in South Asia. He is the author of Camel: How Muslims are Coming to Faith in Christ (WIGTake, 2010). Kevin currently serves in Houston with Global Gates (https://globalgates.info).