The Person, Not the Method: An Essential Ingredient for Catalyzing a Movement

Over a period of three years, I conducted empirical research1 among effective movement catalysts to discover the traits and competencies possessed by pioneers effective in catalyzing a movement among a Muslim people group, and which traits they considered to have contributed to their catalyzing of a movement. This resulted in a profile of an effective movement catalyst, including eleven traits and competencies self-reported as exhibited by all participating effective catalysts.2

Leader Traits Verified to Fit 100% of all Catalysts 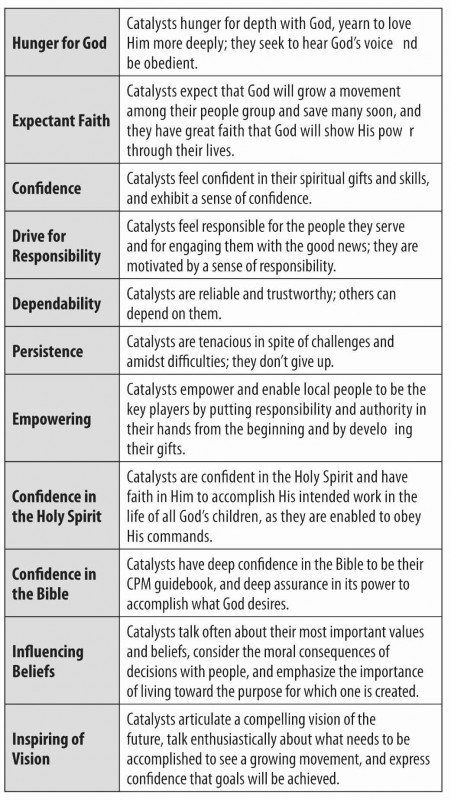 Most literature on the subject of catalyzing a movement has focused on spiritual traits of the pioneer leader combined with the right methodology. David Garrison emphasizes characteristics of CPMs as well as methodology. The subtitles of his main publications are telling, as both refer to methods in the word “how”: “How God is Redeeming a Lost World” and “How God is Drawing Muslims around the World to Faith in Jesus Christ.” Garrison makes his approach sound comprehensive and absolute when insisting, “If one of these components is missing, you won’t get the results you desire” (292). He ascribes a crucial role to the pioneer leader (255), stating that “God has given Christians vital roles to play in the success or failure of these movements” (26); however, it is beyond the scope of his work to explore their traits or competencies.

The Watsons and Jerry Trousdale emphasize right methodology as well. Watsons qualify the significance of the method- ological elements of the DMM approach: “This book focuses on the strategic elements you need to get a movement started. If you remove any of these elements, you won’t have a movement, period. You may have some growth, but you won’t ex- perience a movement.” Watson regards the role of the external leader as critical, since he is the one who sparks the process of a movement (2011, 114). The main trait Watson highlights, a good character, is not verified as such by my research, but intersects strongly with Inspiring Personality, a trait verified in my research (exhibited by more than 80% of all catalysts interviewed), as well as some of the other traits: responsibility, dependability, and persistence. The relevance of character needs further study. Most of Watson’s competencies are either verified directly in this research (radical learning) or appear under competencies identified by this research, including the ability to develop potential beyond boundaries, the ability to delegate (empowering), and listening skills (personal consideration). Another competency identified by Watson, the ability to build teams, is very broad but encompasses a number of competencies identified by this research.

Steve Smith likewise emphasized methodology; he presented a comprehensive, branded package by the name T4T. Smith made no explicit claim that his comprehensive methodology would guarantee a movement. The comprehensiveness of the approach, however, could easily leave the reader with that impression. For example, in a case study of an emerging movement, Smith described how he counseled the catalyst: “It wasn’t a CPM yet, but was getting close. As we listened, it was apparent that some elements of the T4T process were missing. We counseled him to incorporate the lessons from the next chapter.” In a separate publication, the only publication so far addressing exactly the topic of this study, Smith also considered the person of the pioneer leader. Based on multiple case studies of dozens of practitioners, Smith’s summary of the traits and competencies of effective catalysts was that “each of them possesses a healthy combination of a set of characteristics.” Most of those characteristics were verified by the empirical data of this present research.

Among the traits and competencies verified fully are: knowledge of reproduction principles, knowledge of movements, knowledge of what catalyzes movement (all under movement knowledge), lifelong learning, faith, expectant prayer (expectant faith and fervent intercession), and mentoring. Several other traits and competencies suggested by Smith are included within traits verified by this present research, such as knowledge of the Bible (under Bible teaching), tenacity and perseverance (persistence), integrity and spiritual authenticity (inspiring personality), loving God (hunger for God), being led by God, having vision from God, and exercising faith (expectant faith), bold discipling (discipling), ruthless self-evaluation (innovation and radical learning), training (Bible teaching, discipling, and coaching), developing leaders (confidence in nationals, and coaching), and vision casting (inspiring of vision). Only a few traits suggested by Smith are not directly verified to be strongly exhibited by movement catalysts: passionate urgency, single-mindedness and exercising accountability.

With the exception of the approach of adding Muslim Background Believers (MBBs) to existing Christian Background Believer (CBB) churches, it appears that particularity of methodology does not correlate to success in catalyzing a movement. By definition, the traditional approach (planting a single church) is not conducive to catalyzing a movement. This could explain why the pattern of adding MBBs to existing CBB churches is not utilized by any of the effective catalysts. At the same time, 13% of the catalysts employed the approach of planting a new church comprised of MBBs. This single church then reproduced itself and grew into a movement. The difference in these two approaches is not methodological, but primarily sociocultural. The adding of MBBs to CBB churches involves the bridging of divides, whether sociological, cultural, ethnic, or linguistic. These barriers explain why adding MBBs to existing CBB churches is not an effective approach for catalyzing a CPM, whereas the planting of a new MBB church may be.

Still, only 13% of all movements examined have been catalyzed with such an approach. The overwhelming majority of movements were catalyzed with one of the various movement approaches. Although the approaches used by effective catalysts differ in certain aspects, it is important to observe that all the approaches were reproductive movement approaches. These approaches have certain principles in common, which include cultural contextualization, obedience- oriented discipleship, house churches, reproduction, training of multipliers, and reproducible resources. The overall emphasis in pioneer and apostolic leadership and movement literature has been on right methodology, with some attention to leader traits and competencies of the pioneer leader or leaders, particularly traits of a spiritual nature. However, the findings of this research go beyond the commonly established insights of Christian pioneer leadership. The data clearly suggest that a particular methodology is far less significant in catalyzing movements than may have been assumed or publicized. The data of this study clearly establish that certain pioneer leader traits and competencies are strongly associated with effective catalyzing of CPMs. This perspective has been voiced by only a few, most notably Neill Mims and Bill Smith, who formulated what are considered to be among the most significant insights of almost 20 years of research into CPMs: “At the end of the day, it is the man or woman of God and not the method that God blesses.”

Another of the few voices who have expressed this perspective is movement thinker Dave Ferguson, who concluded: “the greater the missional impact, the more obvious the pioneering apostolic leadership becomes.” The person of the pioneer leader(s), not the method he or she employs, plays the greatest role in determining whether or not a movement will result. Bill Smith is again among the few who formulated this accurate conclusion: “If someone says to me, give me the method or give me the curriculum, I know that they have not understood that this [the catalyzing of a movement] is accomplished through persons rather than methods.”

The right leader(s) will employ the right methodology. A pioneer leader with traits such as radical learning, intelligence, complex thinking, innovation, and initiative, who then possesses the necessary socio-influential and transformational competencies, has the best potential to identify and implement the most effective methodology for the context in which he or she is operating. However, a person who receives a certain methodology, but lacks the traits and competencies identified in this study, will be unable to effectively apply the methodology. This stands in stark contrast to the conclusions of many publications on movements that center around methods and principles rather than on the person of the catalyst. I hope the clear data of this research will jolt a paradigm shift in the field of catalyzing movements.

A pioneer leader with traits such as radical learning, intelligence, complex thinking, innovation, and initiative, who then possesses the necessary socio-influential and transformational competencies, has the best potential to identify and implement the most effective methodology for the context in which he or she is operating.

What do YOU think? We invite you to drop a note to [email protected].

Disagree? We would like to hear from you, to stimulate dialogue about this topic.

Agree? We would like to hear your insights on “person over method,” and on the traits of effective movement catalysts.

Dr. Emanuel Prinz is a movement trainer and consultant to missions organizations and networks, including Bethany International and New Generations. He is the Associate Director of the Bethany Research Institute and Professor of Intercultural Studies at Bethany Global University, and the author of Movement Catalysts (2021) and Exponential Disciple-Making and Church Planting (2019). His EXPONENTIAL™ and Catalytic Leadership™ movement trainings have been translated into 10 languages so far. You can contact him at .(JavaScript must be enabled to view this email address).

Dave Coles is an encourager and resourcer of Church Planting Movements among unreached groups, serving with Beyond. He has served among Muslims in Southeast Asia for 24 years. He has over a dozen articles published (under a pseudonym) on topics related to contextualization, reaching Muslims and the nature of the church.